Shelley Hanson and Robert A. DeFrank 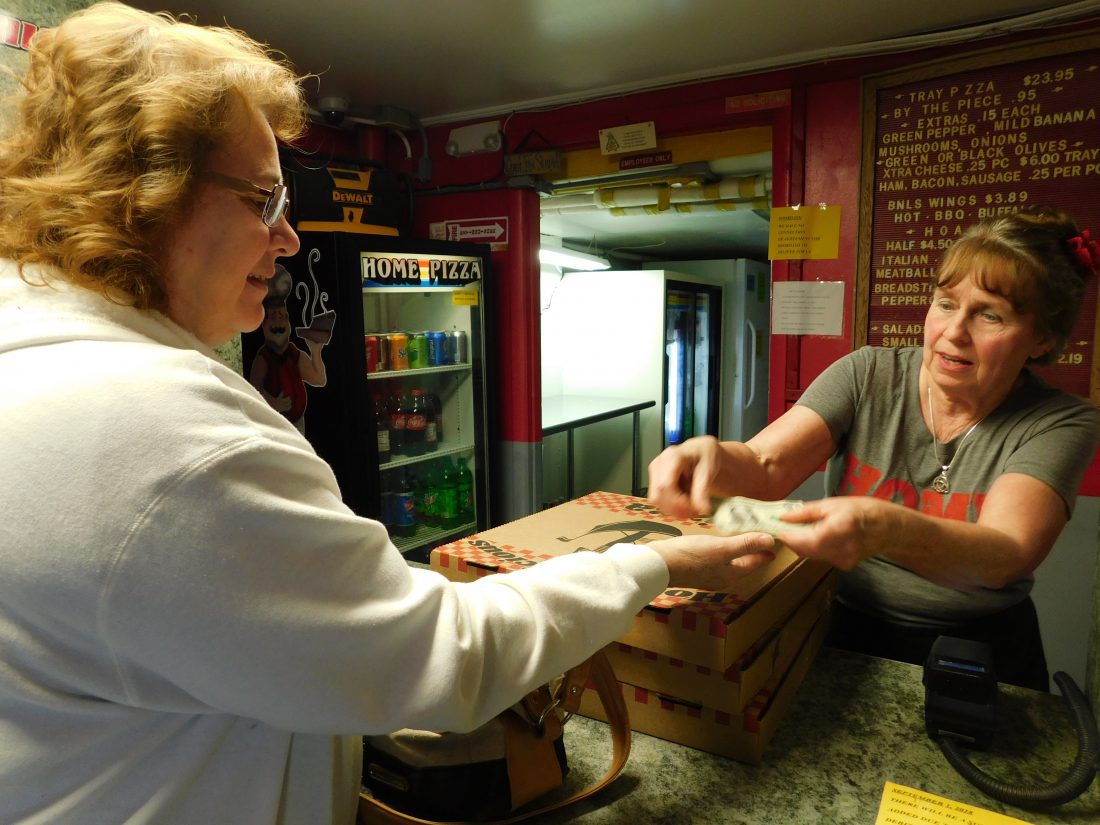 T-L Photos/ROBERT DEFRANK ABOVE: Jean Toothman is one of many St. Clairsville residents who hurried to Halloran’s Home Pizza Friday afternoon to purchase some pies while she still can. The pizzeria is closing Tuesday.

ST. CLAIRSVILLE — One of the Ohio Valley’s landmark pizza shops is scheduled to close its doors on New Year’s Eve, and people are saying goodbye to the distinctive pizza chef statue on Main Street that marks the site of Halloran’s Home Pizza.

Many longtime customers heard the news Thursday evening or Friday morning, and by noon Friday a line had formed from the door to the counter with more customers showing up throughout the day to enjoy the hometown pies for the last time. An employee with the shop, Lauren Neer, confirmed that the business at 114 E. Main St. is set to close early next week.

“We are closing. The last day is Tuesday, and it’s because the owners are retiring,” Neer said, referring to Pat and Patty Halloran, owners of the business.

Neer said she did not know if the owners plan to sell the business following its closure. She said they were not in the shop Friday.

The Hallorans could not be reached for comment Friday via their home phone number.

Neer said she has worked at the shop for about a year and a half. She said she grew up eating the square slices of pizza beloved by many in the St. Clairsville area. The shop began operating in 1968.

According to Belmont County auditor records, it appears the building in which the shop is operated recently was sold to the Goodman Group of St. Clairsville for $350,000. Jay Goodman, owner of Harvey Goodman Realtor, on Friday said his company recently acquired the property from the Halloran family. The building contains not only the pizza shop but other businesses as well, he said.

Goodman said he had heard rumors this Christmas that the pizza shop was going to close, but he had not yet heard from the Hallorans about this.

“I haven’t spoken to them yet. I’m disappointed. … I was hoping for another 40 years,” Goodman said.

“We’re in ownership of the real estate. We have nothing to do with the operation of the shop. … We would be interested in leasing the space to someone interested in keeping a pizza shop in that location. We don’t know if any equipment would be left behind,” Goodman added.

At the pizzeria, the employees told customers they had to take the phone off the hook because of the high call volume and that no cold trays of pizza were available. Demand spiked on Friday, and customers were told they would have an average wait of more than an hour for their orders.

At least one customer placed his order — in person, since the phone was off the hook — four hours in advance. When he picked up his order, he learned that the shop had stopped accepting orders for Friday as of 5 p.m. and that it was not taking any more advance orders for today.

Several customers exchanged pleasantries with employees and wished them well during the wait.

“It’s my favorite place to eat since I was a kid,” Zack Riffle of St. Clairsville, a student in the St. Clairsville-Richland City School District, said. He had heard about the coming closure Friday morning. “My mom told me about it.”

Others took to the road when they heard the news.

“We really like Home Pizza,” Ryan Hoover of Harrisville, another St. Clairsville-Richland district student, said. “My aunt, she lives two hours away. We have to order it for her every time. I’m getting pizza for her. We always order frozen trays because she lives so far away. My aunt and uncle just love it, so I drove half an hour to get some pizzas today.”

Other residents took the news hard.

“That’s horrible,” Andy Wildman of St. Clairsville said, noting that Home Pizza is a family favorite. “Even the kids, when they come in from out of town, they take pizza home with them. … They take the frozen boxes home. When they aren’t coming in from out of town, their friends will deliver it to where they live (around the Columbus area). … It’s been here for years and years.”

“Growing up, that was the place to go,” Mark Poindexter of St. Clairsville said, adding that he recently moved back to St. Clairsville and has enjoyed Home Pizza’s familiarity. “Everybody hung out there on the street. … Mr. Halloran, who was the originator, who opened that up many, many years ago, was just terrific people. His son Pat, a good guy. … It’s kind of a St. Clairsville institution, and I hate to see it go.”

St. Clairsville Area Chamber of Commerce Director Wendy Anderson said Home Pizza will be missed. Anderson said Halloran is not a member of the chamber but has always been valued.

“It’s what you can call a community staple,” she said. “It’s going to affect so many people. … When you come home from school, you get the pizza. Then as these kids grow up, they go to college, they come home, they get that pizza. And as they move away, they come home for the holidays, they get that pizza. That is more than just pizza. That’s the establishment. … It’s a sad day when your pizza place goes out of business.”

Poindexter said the pizzeria is unique.

“I can remember coming up here with my children and packing dry ice in a cooler and taking a tray or two home. My kids would live off of that for a couple of weeks,” he said.

“That pizza place is the only one I know that’s all about the hometown,” Anderson said.

Anderson had not heard if any other business is interested in the location.