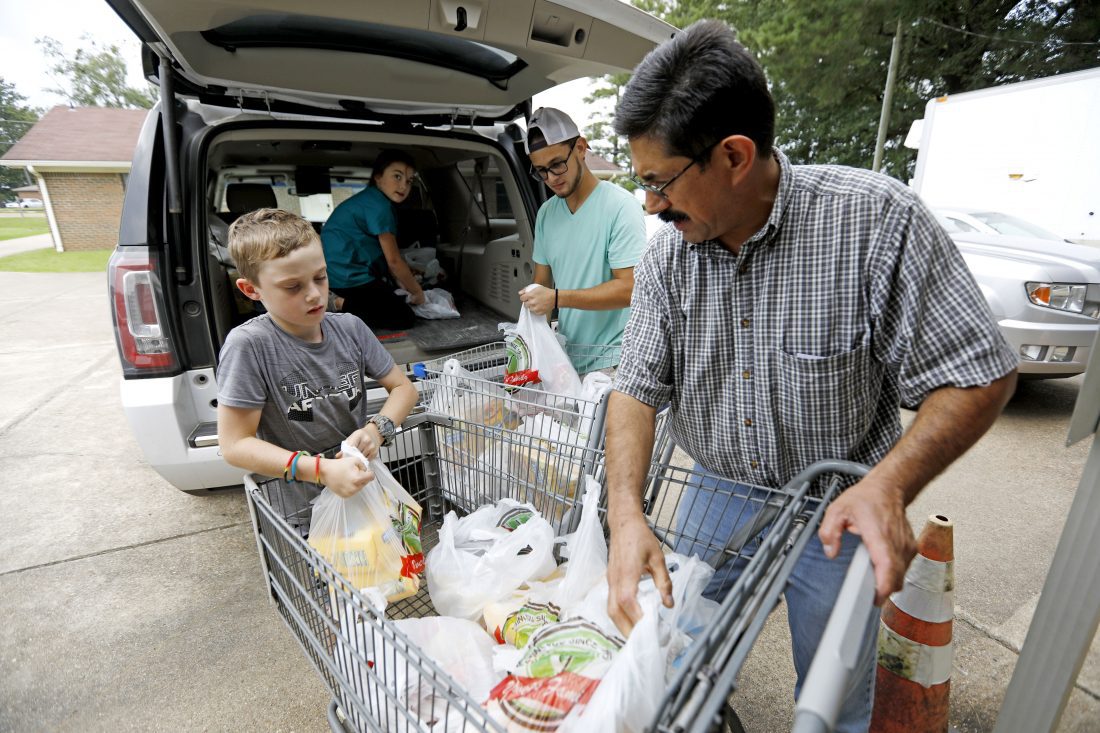 In this Thursday, Aug. 8, 2019 photo, Pastor Hugo Villegas, right, and his son Pablo Villegas, second from right, assist Cade Vowell, left, and his sister Addison Vowell, second from left, unload donated items for the pantry at the Carlisle Crisis Center in Forest, Miss. The center, a ministry of Scott County Baptist Association, says they will need more food items to help out the families affected by the fallout of Wednesday's raid by U.S. immigration officials at poultry plants Koch Foods and PH Foods in neighboring Morton. The raids were part of a large-scale operation targeting owners as well as undocumented employees. (AP Photo/Rogelio V. Solis)

Federal investigators behind the biggest immigration raid in a decade relied on confidential informants inside the plants in addition to data from the monitoring bracelets to help make their case, according to the documents.

The sworn statements supported the search warrants that led a judge to authorize Wednesday’s raids, and aren’t official charges, but give the first detailed look at the evidence involved in what Immigration and Customs Enforcement officials have described as a yearlong investigation.

Officials arrested 680 people during Wednesday’s operation . Three Democratic congressmen on Friday demanded that the Department of Homeland Security and the Department of Justice produce information. They want to know the cost of the raids, whether employers face criminal charges, whether any U.S. citizens were detained, how many parents were separated from children and whether any still remain separated.

The statements unsealed Thursday allege that managers at two processing plants owned by the same Chinese man actively participated in fraud. They also show that supervisors at other plants at least turned a blind eye to evidence strongly suggesting job applicants were using fraudulent documents and bogus Social Security numbers.

The documents say electronic monitoring bracelet data shows people previously arrested for immigration violations and not allowed to work in the U.S. were working at all seven plants raided.

There have historically been few criminal convictions for hiring people without documents because prosecutors must prove employers knowingly hired someone without legal work authorization. Employers often say they were fooled by fraudulent documents.

Companies can also face administrative fines based on audits of I-9 forms, which employees fill out when they’re hired, presenting documents to prove they can work legally work.

Investigators allege the most brazen fraud took place at two smaller chicken processing plants — PH Food Inc. in Morton and A&B Inc. in Pelahatchie. Sworn statements identify Huo You Liang of California, known to Mississippi employees as Victor, as owner of both.

A PH Food employee, acting as a confidential informant, told Homeland Security investigators that the vast majority of the 240 employees at PH’s plant in Morton and the 80 employees at A&B’s plant in Pelahatchie didn’t have proper work documents, including many Guatemalans.

The informant said employees used their real names and made-up Social Security numbers to apply for jobs at PH and A&B. “The payroll companies, as well as PH Food Inc. and A&B Inc. do not verify the authenticity of their documents,” the informant told investigators. Mississippi state law requires employers to check documents using E-Verify, an otherwise voluntary online federal system.

Calls to A&B and PH Food on Friday went unanswered.

The evidence also included a video and audio conversation involving secretary Heather Carrillo and the informant, recorded May 14 at PH in Morton. A summary says, “Carrillo said that she was looking for some ‘papers’ for ‘Iris,’ but ‘Iris wasn’t going anywhere because she was working with Victor (Huo You Liang) for a good time (duration of employment).'” It says Carrillo said A&B manager Salvador Delgado didn’t want it reported because Carrillo knew which of his employees were real and which were fraudulent.

The agent notes investigators believe Delgado was embezzling money from A&B by adding fraudulent names and Social Security numbers to the payroll and keeping the proceeds.

The warrants state PH Food uses Personnel Management Inc. of Shreveport, Louisiana, to process payroll and perform some human resource functions, and that investigators believed Liang and Carrillo tried to use the contractor to minimize responsibility for illegally employing workers.

Officials earlier stated that in addition to the chicken plants, they executed a search warrant in Louisiana on Wednesday. ICE spokesman Bryan Cox declined Friday to confirm that Personnel Management had been searched. The company didn’t respond Friday to a phone message and email.

One woman told agents that a Spanish-speaking human resources employee at Koch Foods in Morton looked at two different IDs in three weeks. Ana Santizo-Tapia of Guatemala also told agents that a Koch supervisor asked if she had an ankle bracelet. Told yes, “he said it was okay, but she needed to keep it charged,” according to the warrant. The supervisor “stated that he knew ‘they’ were poor and came to the United States to work.”

Another Koch employee said she worked at one plant in Morton for 11 months under a false name, and then got a job at the town’s second Koch plant under her real name after receiving valid U.S. documents.

Koch said in a statement Friday that the Illinois company has a “strict and thorough employment verification policy” and knows of no managers or supervisors arrested.

A Friday statement from Peco said the company relies on E-Verify and “adheres strongly to all local, state and federal laws.”