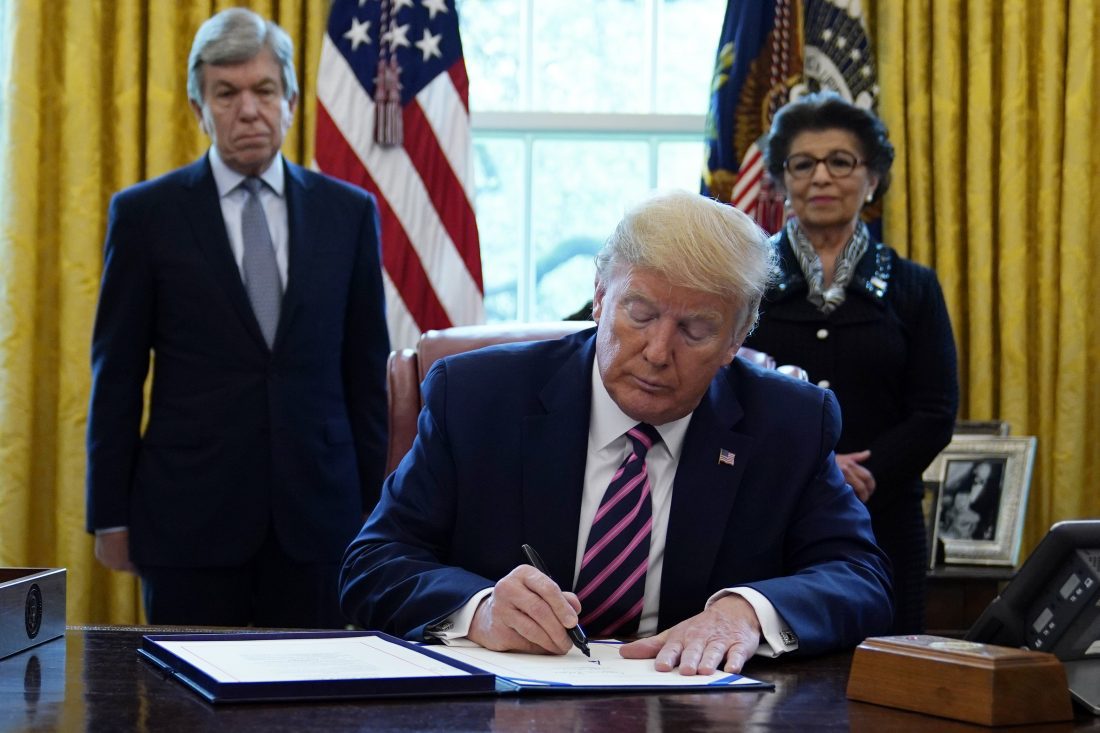 WASHINGTON (AP) — Spend what it takes, Washington said as it confronted the coronavirus. Well over $2 trillion later, it’s unclear where that spending will end.

One of the lasting legacies of the coronavirus pandemic will be staggering debts and deficits on the U.S. balance sheet, with shortfalls hitting levels that would have been unthinkable just a few decades ago.

It’s a fiscal clamp that is likely to persist for a generation, or even into perpetuity, with debt levels having passed the point of easy return in a capital where lawmakers are increasingly incapable, or unwilling, to constrain them.

The latest, and dire, projection from the Congressional Budget Office, released Friday, states the U.S. deficits will mushroom to $3.7 trillion in 2020, fueled by the four coronavirus relief bills signed into law by President Donald Trump. A fifth bill is already in the works, and will be “expensive,” according to House Speaker Nancy Pelosi, D-Calif.

The deficit for 2021 is estimated to tally $2.1 trillion, double previous CBO estimates.

The report predicts a devastating hit to the economy this quarter at an annualized rate of decline of 40% — probably the sharpest economic shock ever — accompanied by a 15% unemployment rate this spring and summer. For the entire year, the economy is predicted to shrink by 5.6%.

CBO Director Phillip Swagel cautioned that there is “enormous uncertainty” to the projections, given the unprecedented nature of the crisis, but it’s plain the economic shock is unlike anything seen since the Great Depression.

“Challenges in the economy and the labor market are expected to persist for some time,” Swagel wrote in a blog post. He said the economy is likely to begin rebounding in the third quarter, but the jobless rate will remain about 10% by the end of 2021.

On the government front, coronavirus-related figures point to red ink unparalleled since World War II. Economists generally say the most significant measure of debt and deficits is to compare it against the size of the economy, and by that measure the debt is soon to rival the record. CBO says publicly held debt will reach 101% of gross domestic product by the end of this year, just below the post-war high.

The deficit was entrenched long before the virus, with federal revenues shrinking to well below historic averages and the spending side of the ledger rising thanks to record Pentagon expenditures and the addition of baby boomers to Medicare and Social Security.

Even Washington’s few remaining spending hawks say red ink should not be a focus for now as the government faces unemployment levels not seen since the Great Depression and shutdown orders lasting well into next month or beyond.

“Right now, I think the wise move for Congress is to keep the economy afloat regardless of what it costs,” said Brian Riedl, an economic and budgetary policy analyst at the free market Manhattan Institute think tank. “That being said, the budgetary cost is enormous, cannot be ignored, and makes it even more important that lawmakers begin thinking about how to fix the federal budget after this is over.”

But when policymakers inevitably are forced to take on deficits, virtually none of them will have any experience in doing so. The era of successful action ended long ago, with a hard-won 1997 law that capped a decade’s worth of politically costly but ultimately effective reduction measures.

In the interim, a divisive brand of politics has taken hold. No one has even seriously tried tackling the debt since a failed effort by former GOP Speaker John Boehner of Ohio and President Barack Obama almost a decade ago.

Republicans are beginning to warn of the coronavirus costs now — GOP Sen. Ben Sasse on Friday called Washington’s spending habit “suicidal” — but the party passed deficit-financed tax cuts when controlling all of government in 2001 and 2017. Those twin tax bills mean that a steadily more liberal Democratic Party won’t endorse the kinds of deficit-cutting steps they endorsed in the 1990s.

There’s also no agreement on what levels of debt and deficits are sustainable, and the number of deficit doves has swelled over the past decade. Those skeptical of the fiscal warnings note that the government has run large deficits for well over a decade without the predicted increase in interest rates, economic stagnation or a European-style fiscal crisis.

“There’s zero reason to be concerned about the short-term macroeconomic impact of the deficit,” said Harvard University economist Jason Furman, a former economic policy adviser to Obama. “Interest rates are very low. The Fed has a lot of tools to ensure that they stay very low, and the bigger short-run macroeconomic concern is an insufficient response.”

The CBO has long said that lawmakers eventually will be forced to tackle the government’s chronic financial woes, if for no other reason than the looming insolvency of Social Security and Medicare. When Social Security runs out of reserves in the next decade, the system will be able to pay only 79% of benefits.

The problem is landing in the lap of whoever is elected in November in a race that’s been transformed by the crisis.

The presumptive Democratic nominee, former Vice President Joe Biden, supported numerous deficit-reduction bills over his long career but has moved significantly to the left in hopes of uniting party progressives behind him.