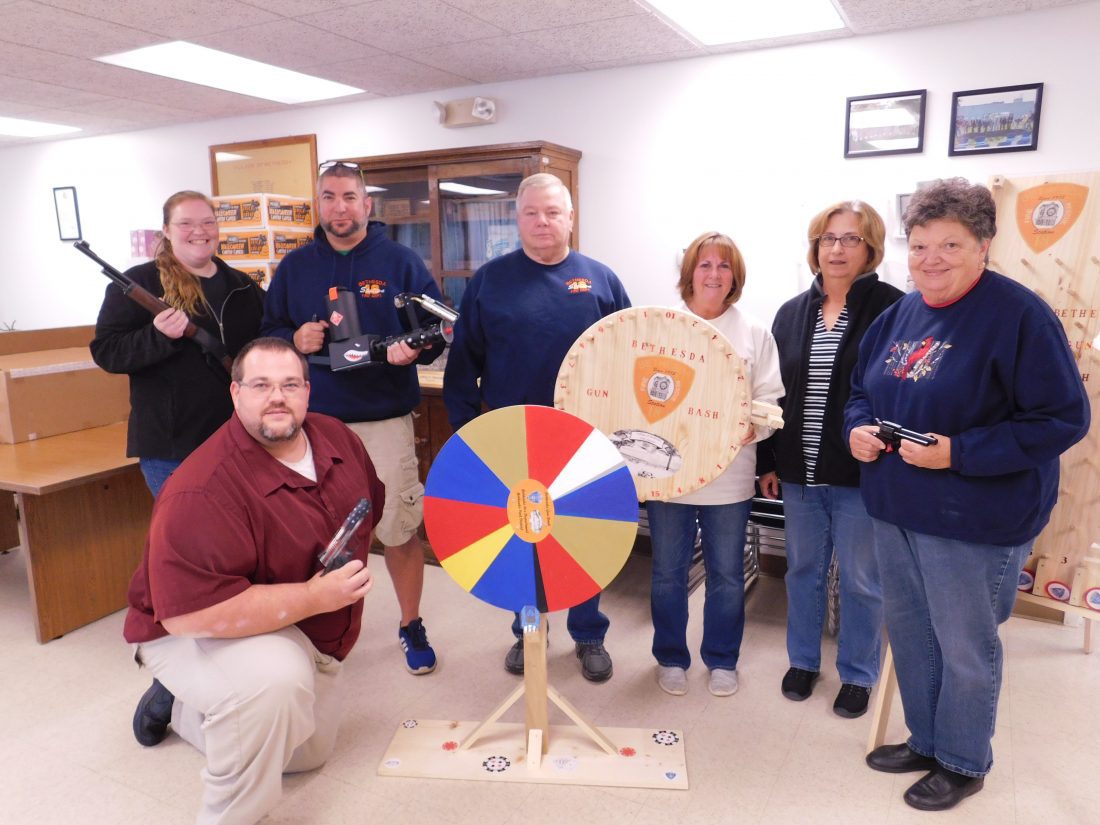 T-L Photo/ROBERT A. DEFRANK Organizers of the second Bethesda Gun Bash invite all to buy a ticket for a chance at some quality firearms, but tickets are in short supply. Pictured are village Fiscal Officer Rick Burkhead, foreground, and, from left, park board member Samantha Burkhead; Councilman Jay Van Horn; Fire Chief Neil Hunt; park board members Debbie Mason and Joni Davis; and Councilwoman Ruth Saffell.

BETHESDA — The community’s gun bash has taken off with the second annual fundraiser set for Nov. 2 at the Carnes Center in St. Clairsville.

Attendance is expected to exceed last year’s firearm giveaway, but tickets are quickly running out.

“Bigger, better and busier,” Bethesda Village Administrator Dirk Davis said of organizers’ hopes for this event. “More guns this year. Different types of guns. New types of things to play games on. It’s going to be bigger than what it was last year, and last year was a good one.”

Once again, half the funds raised will go to the fire department and half to the park.

Bridgeport Equipment is providing the majority of the firearms. The guns available this time include a replica of an old-style Thompson 1927 tommy gun, although it is not an automatic weapon.

“It’s a semi-automatic .45. It looks like a legitimate tommy gun. It’s got a 50-round drum,” Burkhead said.

Other weapons up for grabs include a Thompson D-Day edition, commemorating the 75th anniversary of the World War II operation; a Colt buntline revolver, a Kimber Amethyst .380, and a Springfield Hellcat 9 mm. The giveaway also features a working flamethrower.

The raffle also features larger items in general, such as a television and a mystery gun safe with two rifles inside.

Burkhead said most of the sponsors also donated to last year’s event.

Funds raised will go toward the newly completed paving of the Epworth Park walking trail, partially funded with a grant of $25,000 from EQT Energy and a $20,000 grant from the Ohio Department of Natural Resources. Total cost was $96,000.

“I hope it’s a big event. The last one was a success, and this one should be, too. We’re hoping everybody will turn out for it,” Fire Chief Neil Hunt said.

Burkhead said the department recently purchased the truck for $830,000 and will receive it in April or May.

“We appreciate everybody who’s coming to this event and helping out with this event because it helped pave our park,” Samantha Burkhead, park board member, said.

Anyone wanting a ticket may contact Burkhead or Davis at the village office, the firehouse, or Mama Bea’s restaurant and carryout. More information can be found on The Bethesda Boomstick Bash on Facebook.