Chick-fil-A to open in spring 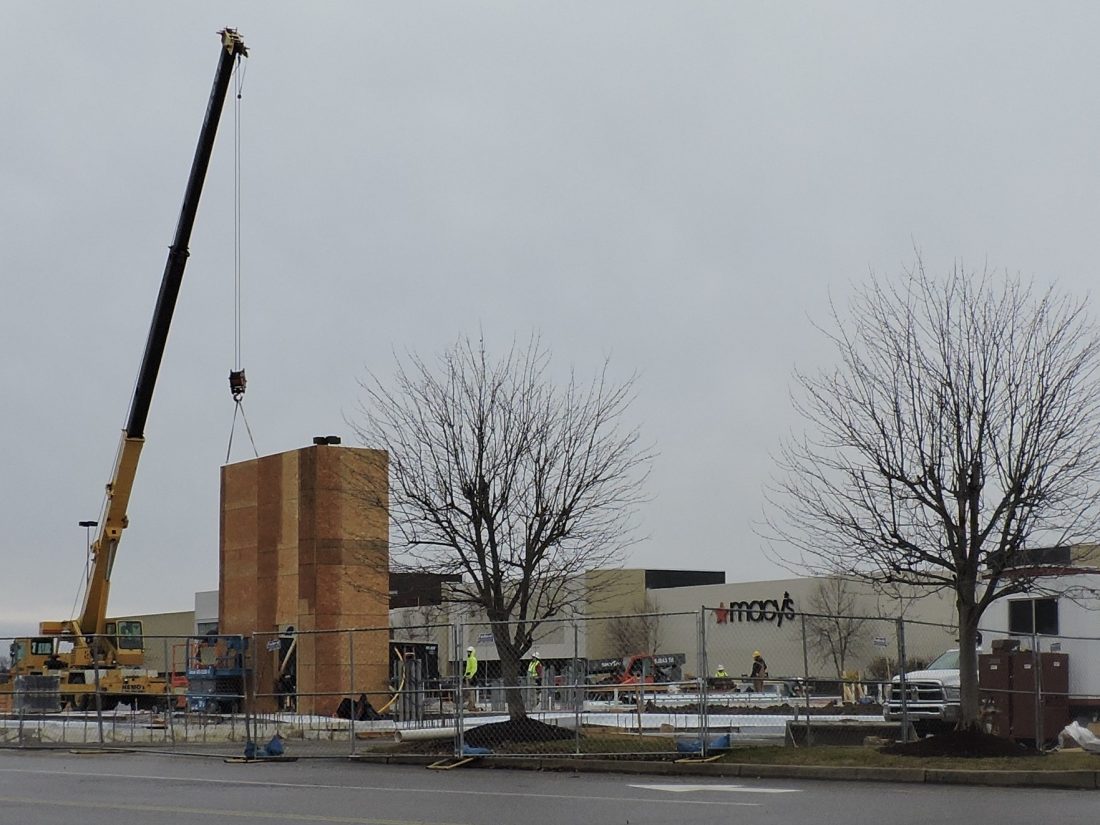 T-L Photo/CARRI GRAHAM Construction crew members continue work on the new Chick-fil-A restaurant at the Ohio Valley Mall on Tuesday. The restaurant is expected to be complete by early spring.

ST. CLAIRSVILLE — Construction of a new restaurant known for its chicken is moving along at the Ohio Valley Mall.

“Their (Chick-fil-A officials) original construction plan got delayed a little bit. They’re moving along, but not as fast as they had hoped,” Bell said.

The restaurant previously had intended to open its doors by the end of the holiday season, welcoming hungry customers before the end of the year. However, the opening has been delayed until March or April, Bell said.

Construction of the new building broke ground in September. The nearly 5,000-square-foot eatery is being built outside of the mall in the parking lot next to Longhorn Steakhouse. Bell said it will hold seating for 117 people and include a drive-thru lane.

The mall’s Chick-fil-A is the second such restaurant announced for the Ohio Valley this year. The Highlands in Ohio County also is expecting a new Chick-fil-A restaurant as well.

According to previous reports, construction of the new restaurant east of Triadelphia is set to take place on a 1-acre lot located between WesBanco and Cheddars at the retail complex. The Ohio County Development Authority has indicated that construction of the eatery is nearly complete and an opening date is anticipated for the end of this year.

The chicken chain has eateries across the country, with more than 2,100 restaurants in 46 states and the District of Columbia.

Additionally, construction of the new Hampton Inn & Suites at the Ohio Valley Mall is still “cranking along,” Bell said. The hotel encompasses a portion of the space where the former Kmart store resided. The other portion is home to the recently opened Dunham’s Sports store, which welcomed its first customers in late October.

Bell said construction of the inn is “on schedule” and that it should be ready to open by the middle of 2020. The hotel will have 113 rooms and suites upon completion.

COLUMBUS -- AAA automotive researchers found that over the course of 4,000 miles of real-world driving, vehicles ...

FAIRPOINT - The Wheeling Township Board of Trustees will hold a special meeting at 9 a.m. Monday to discuss ...

ST. CLAIRSVILLE ­— The argument about a new candidate for the city service director position continued Monday ...

ST. CLAIRSVILLE — The decision was a difficult one, but organizers of the annual Belmont County Schools Staying ...