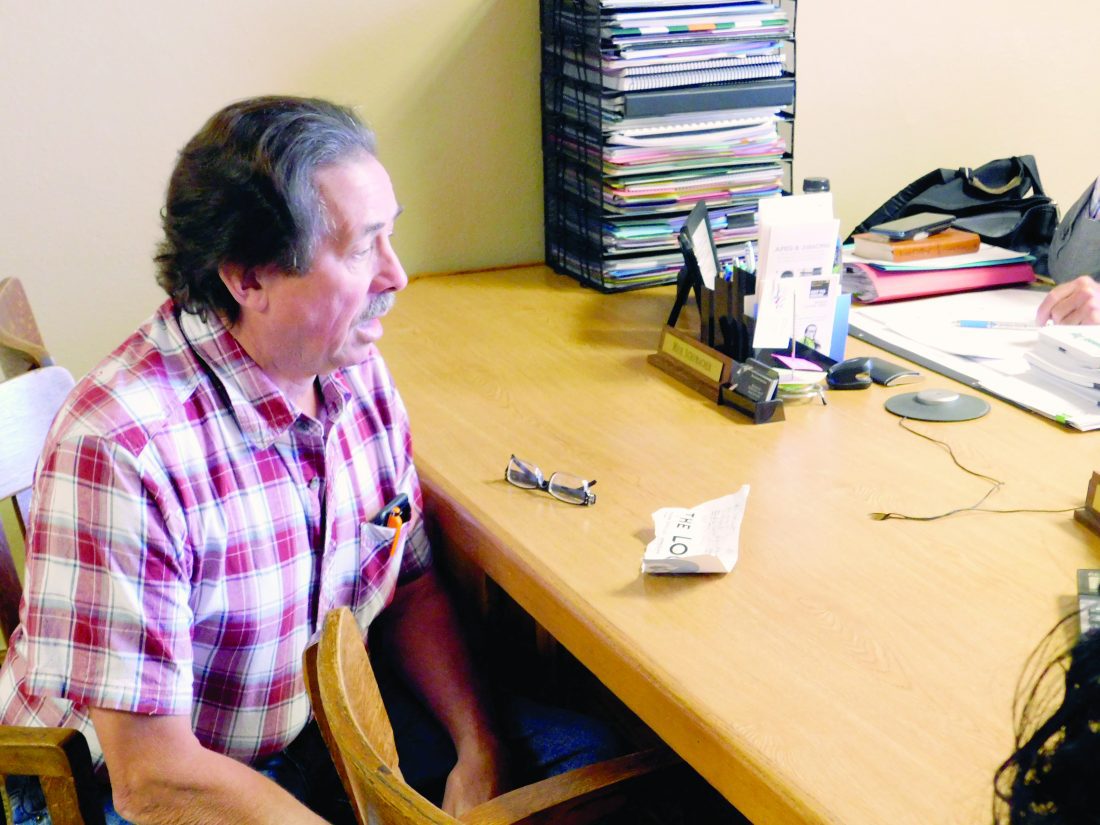 T-L Photo/ROBERT A. DEFRANK Carson McCurdy, who has put himself forward as a potential buyer of the Monroe Care Center, visits the commissioners Monday. He will continue to oppose the sale to Bryan Casey, president of Alternative Living Solutions.

WOODSFIELD — The Monroe County Commissioners are proceeding with a plan to sell the Monroe County Care Center to Bryan Casey, president of Alternative Living Solutions, meaning another man who wants to buy the property, Carson McCurdy of Jerusalem, is expected to continue with his lawsuit trying to stop the sale.

McCurdy had begun the process of filing suit against the commissioners to stop the sale on the grounds that the 166-year-old professional rehabilitation and nursing services provider should have been put on a public bid. He dropped the suit so the commissioners could begin talks with him.

On Monday, he informed Commissioners Carl Davis, Tim Price and Mick Schumacher he had reviewed information they had provided to him about care center expenses. McCurdy requested additional information including a breakdown of actual revenue per bed, per patient, on a daily or monthly basis.

“There was no information in there as far as which are Medicaid patients, which are private pay, and also a breakup between the actual nursing home end of it and the assisted living, which would give a much better picture…to anybody who’s looking to purchase. If they’re lacking in one area or one area’s carrying the rest of them,” McCurdy said.

He also said he would like to know more about income after billing in order to plan a budget should he become owner of the facility. He also asked to make a physical inspection of the center.

“I want to see where any potential problems lie, what kind of major expenses I might have to incur should I be the ultimate purchaser, so I’d like permission to do that also,” McCurdy said.

Price asked McCurdy to put his request in writing so the board would be clear on its scope. Price said there was no issue with an inspection.

McCurdy also asked if the commissioners had attempted to find other buyers. Davis and Price said they were meeting with Monroe County Prosecutor James Peters to determine if there were any legal obstacles to that, since the board had signed a letter of intent to sell to Casey.

Monroe County Auditor Pandora Neuhart said after the meeting that the center is not self-sufficient. Last week, the commissioners had advanced $24,400.

“They’re doing a lot better than they were. They haven’t gotten as many advances as they had gotten beforehand, and I think we need to assure them, the people at that nursing home, the residents and employees that somebody’s going to buy the facility. They’re not going to lose jobs, they’re not going to be kicked out on the street. That’s the commissioners’ responsibility, to tell those people that…they’re going to be taken care of.”

Neuhart added the building is valued at $3.2 million.

Afterwards, the commissioners passed a motion to entered into a nursing facility management agreement with Monroe County Operating Inc., the entity Casey created to operate the care center, pending Casey’s approval of modifications to the agreement. Davis and Price voted in favor, with Schumacher opposing.

“That hadn’t been done for awhile,” Schumacher said, adding the care center had been scheduled to make payments of $2,000 per month in reimbursement for the close to $7 million expended. He said this payment catches the care center up through September.

Afterward, McCurdy said he would likely resume his suit against the commissioners.