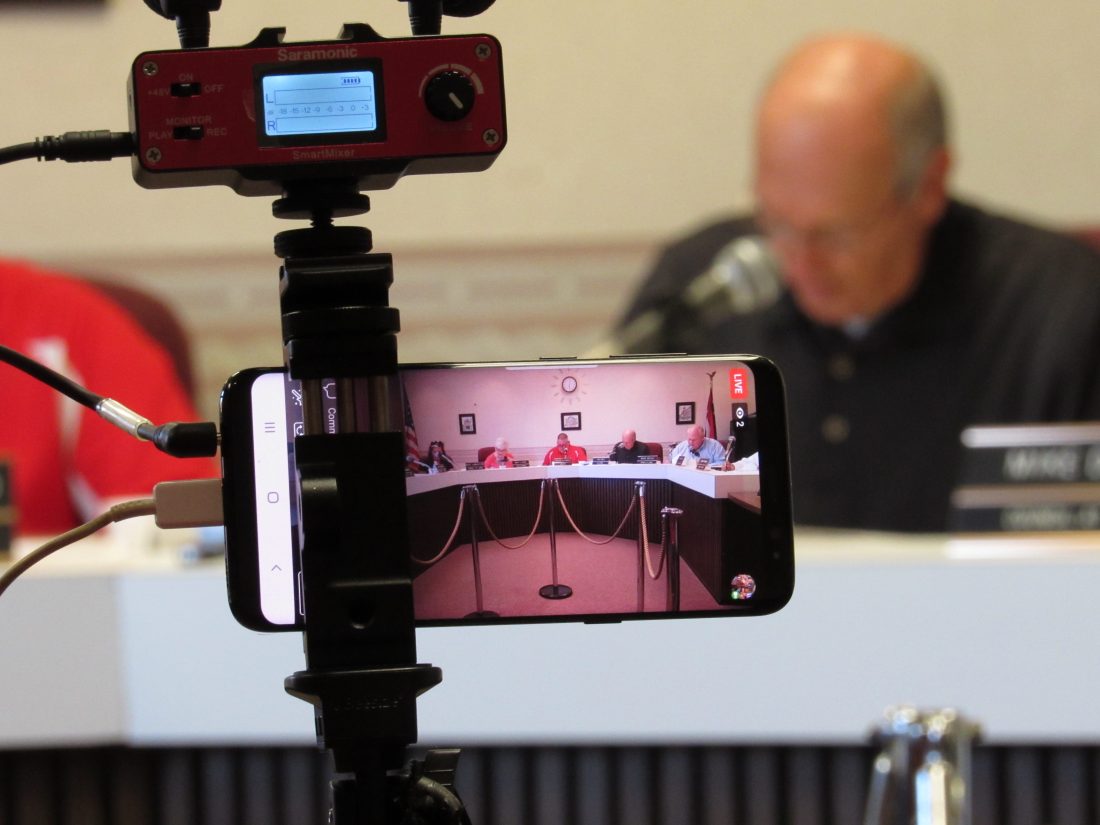 T-L Photo/SHELLEY HANSON MEMBERS OF Bellaire Village Council can be seen on the screen of this cell phone that is part of a recording system being used by Bellaire resident and firefighter Ray Penyak during Thursday's regular council meeting. Penyak posts the live feed of the meeting on a Facebook page he calls "Bellaire Ohio government meetings."

BELLAIRE — Village Treasurer Tom Sable said council typically doesn’t address matters talked about on social media, but he was compelled to do so during Thursday’s regular Bellaire Village Council meeting.

Sable said he wanted to address comments made about the village’s 41st Street playground on social media. He said when the playground was vandalized by fire in 2015, the village’s insurance company covered the loss.

Initially, the claim was denied, but eventually the company did cover it, Sable said. The village park board made the decisions about what types of playground equipment was purchased to replace the damaged items. Comments on social media apparently claimed the funding for the replacements came from a grant.

According to newspaper reports at that time, the families of the juveniles charged with the arson were ordered to help pay for the cost. The insurance money covered most of the cost, which ended up being $66,000.

Sable said another unrelated grant for sidewalk replacement was sought by former village administrator Scott Porter. Sable said Porter talked recently to the village Deputy Auditor Marla Krupa about the grant, noting it was through the Bel-O-Mar Regional Council.

“The grant is for one-half of the sidewalks through the perimeter of the park,” he said.

Bel-O-Mar’s A.C. Wiethe, he said, told Krupa that engineering services were needed for the grant. An engineer was contacted, but apparently the two firms have not been able to connect via phone.

“There is another grant the village can apply for, for the remainder of the sidewalks at the park,” he said.

In other matters, it was also noted during the meeting that the Bellaire Volunteer Fire Department will organize this year’s Christmas parade, as the Bellaire Chamber of Commerce has apparently disbanded.

Meanwhile, listed on council’s meeting agenda was an “Ohio EPA Notice of Violation.” A copy of the letter to the village from the Ohio EPA outlined a few items that need corrected across the village:

∫ The first was that the village has not had a licensed Class II certified wastewater collection operator since February 2018.

∫ An overflow is occuring at the West 23rd Street lift station. It was noted the East Ohio Regional Water Authority is providing grant money to help with this matter.

The letter notes EPA wants documentation from the village about actions taken or will be taken to resolve the issues.

In other matters, a new business that sells sweet treats has opened in the village — Unique Treats by Jacquie. It is located at 3391 Belmont St. The shop specializes in gourmet caramel apples and also sells soup. A grand opening celebration is planned for 4 p.m. Oct. 23. Free samples will be offered during the event.