Hoagland disagrees with board on possible use of eminent domain 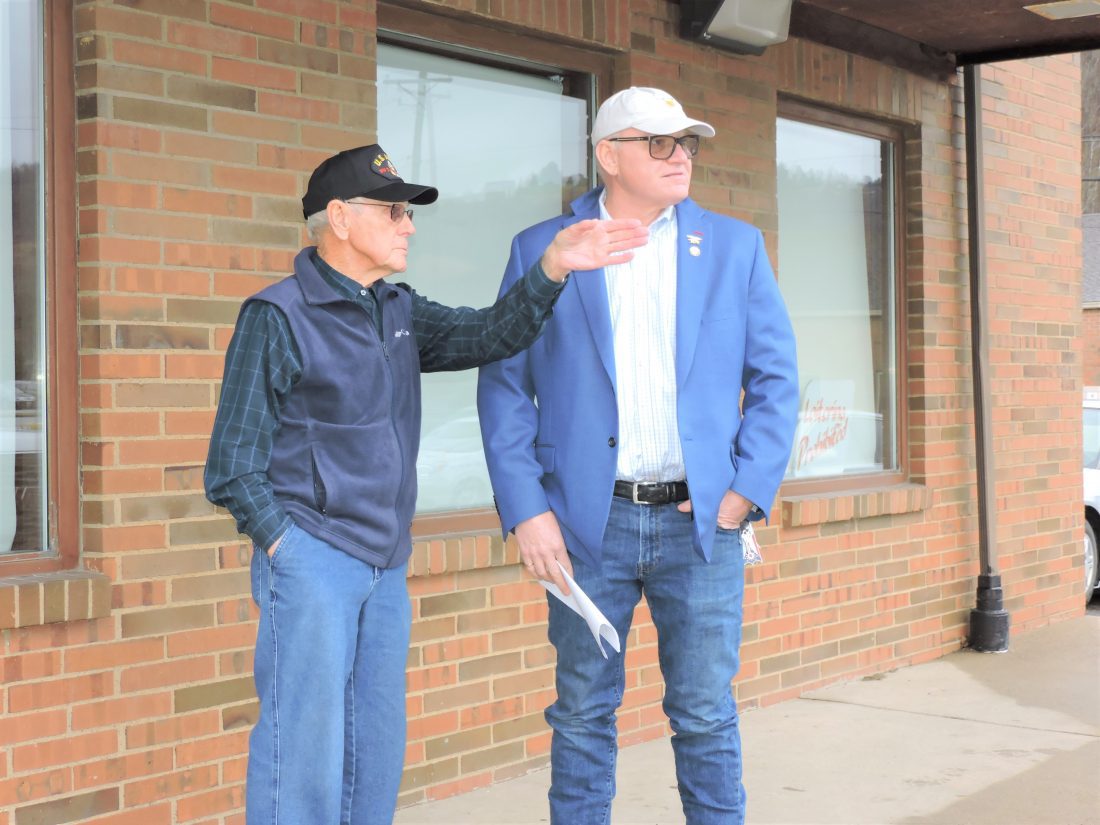 JOHN CALLARIK, left, talks with Ohio Sen. Frank Hoagland, R-Mingo Junction, inside of his Chapter Square Laundromat and other businesses in Bridgeport on Thursday.

BRIDGEPORT — State Sen. Frank Hoagland on Thursday visited Chapter Square Laundromat — one of the sites the property owner fears the Bridgeport Exempted Village School District Board of Education may try to take via eminent domain for a new football field complex.

Hoagland, R-Mingo Junction, said he did not believe the district should try to take the property from its longtime owner, John Callarik, who has been very vocal about not wanting to sell his land.

The property is home to several businesses he owns and operates.

Callarik invited Hoagland to see the businesses and sought to enlist his help in stopping the board of education.

According to a letter to the editor submitted to The Times Leader by district Superintendent Brent Ripley, “there was never any intention to remove all of the businesses at Chapter Square.” Ripley wrote that the board’s initial offer to Callarik in 2018 did involve most of Chapter Square along with an offer to name the new field in honor of John and Della Callarik.

A different plan was presented to Callarik in November that Ripley said would not affect the laundromat or other businesses next to Commercial Drive. That plan involved a smaller portion of Callarik’s property, including the car wash and one storage unit while the laundromat and other businesses would remain open to the community, according to Ripley.

Hoagland said that, to date, he has not seen any paperwork stating that the district has legally filed to use eminent domain. He noted he recently spoke with Superintendent Brent Ripley about the situation.

“It’s an asset to the entire community. It’s going to be an asset when the cracker plant comes in. So why would we want to push this asset out of the community that has employees, that’s already operational?” Hoagland said. “Forty years they’ve been operational, and now (the board is) going to come in and say, we need your property and we’re going to push you out? I don’t agree with that ideology.”

Ripley previously said the board only wants to use eminent domain as a last resort. He said the board remains aware of other properties brought to his attention.

The district razed the old home stadium seating last year, because it was deemed unsafe to use. The district has said it cannot use the existing, flood-prone Perkins Field to rebuild, though it has continued to be used for other sports besides varsity football.

“It’s not money. Money is not everything. … I could sell this and get out and say the heck with everybody, but no I can’t do it. I can’t quit, I won’t quit. I like all these smiling faces,” Callarik said.

Callarik, with the help of Martins Ferry resident Paul Reithmiller, has been busy making signage to protest the use of eminent domain. They plan to use the signage during a rally of sorts that is set to be held prior to the board of education meeting that starts at 6 p.m. Tuesday in the school cafeteria.

Hoagland said he has not personally been sent any letters, documents or petitions either in favor of or against the use of eminent domain on Callarik’s property or another neighboring property.

Callarik said despite his age — 94 years old — he’s got a lot of life left to live.