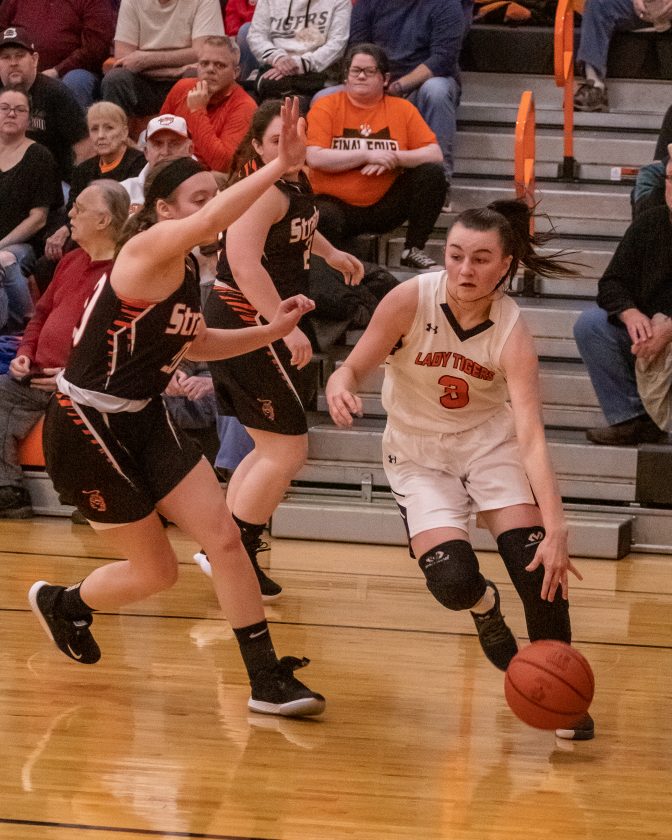 Coach Serge Gentile’s charges will seek to punch their ticket to the district tournament when they welcome Zanesville Bishop Rosecrans Saturday in a 2 p.m. start. The Bishops ousted Steubenville Catholic Central, 47-37, last night.

Strasburg saw its season end with a 9-14 mark.

The game was extra special for the homestanding Tigers as junior standout Tory Hendershot joined her brother, Kelly, in the school’s 1,000-point club. She reached the coveted mark at the 3:53 mark of the third quarter via a free throw. Kelly, meanwhile, became the school’s all-time leading boys’ scorer last week.

The matchup of Tigers kicked into mercy-rule mode when the hosts built the necessary 35-point lead at 56-21 with 1:56 to play in the third period. Ironically, Shadyside went scoreless in the rapidly played fourth quarter as Gentile cleared the bench late in the third.

“We played hard and took care of the ball. When you play hard for four quarters good things will happen,” Gentile said. “We were solid defensively and got contributions from a lot of people. It was a nice way to start the tournament.

“It was only a matter of time before Tory reached it. She is a great player who does a lot for us,” he added. “She takes care of the ball, attacks the rim and shoots it well. I am happy for Tory.”

Hendershot and fellow junior ace Baylee Wach led the way with 19 points each for the winners. Senior sparkplug Brooke Selmon ended with six markers and a like amount of steals.

Shadyside gained command early and kept it the balance of the night. The hosts built a 17-8 advantage after one quarter with Hendershot delivering eight points.

The hosts stretched their advantage to 33-13 at intermission. Wach helped break the contest wide open by connecting on three treys to start the third period.

“We didn’t talk about what we did last year. Our banner is up on the wall as are several others. We are well aware of the LT tradition,” Gentile said about last year’s state tournament run. “Rather, we talked about what things made us special last year. You have to have a lot of things go right when you make a run like we did last year.

“Our girls played so hard last year and we had great intangibles,” he added. “We talk about playing hard, boxing out, every possession matters, going after every loose ball and playing tough. We talk about things that made us successful.”