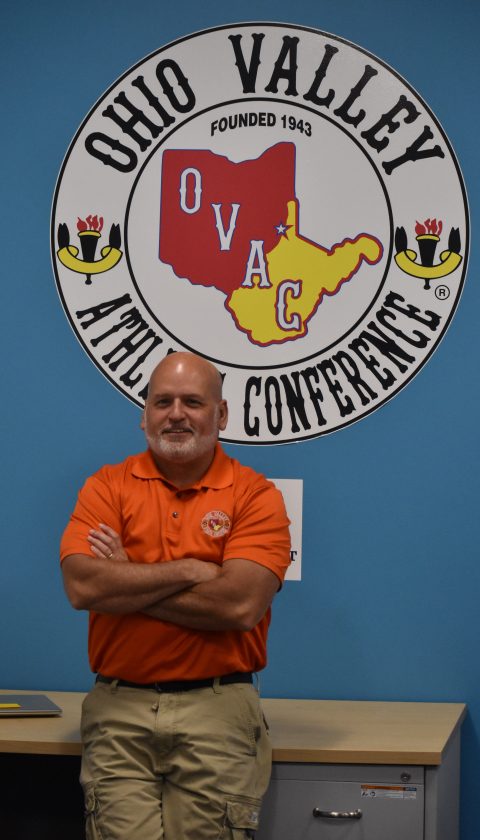 ST. CLAIRSVILLE — Dirk DeCoy really could only smile as he sat inside his office at Belmont College earlier this month when asked about completing his first full year as the executive director of the Ohio Valley Athletic Conference.

With anything, there is always going to be an adjustment period and ups and downs. DeCoy experienced all of those. He had his moments of frustration and he ended his first full school year at the helm in the middle of a pandemic that led to the shutdown of prep sports in both Ohio and West Virginia.

“I knew this job would be all encompassing (in terms of emotions),” DeCoy said. “And it was. There were obviously a few off-the-radar type events, but other than that, (the first year) was everything I thought it would be.”

It didn’t take long into his tenure to experience one of those ‘off-the-radar’ moments.

DeCoy, who took over when Tom Rataiczak retired from the position after 20 impressive years in charge of the nation’s largest prep conference, was on the job for just six minutes on the morning of July 1, 2019 when his phone rang for the first time.

“I got a call that (then OVAC All-Star Football Game Director) Bob Koch was in the hospital and probably wouldn’t be able to come to the game,” DeCoy recalled. “My first reaction was ‘how is Bob?’ Once I knew he was fine, we got down to business and thankfully Dirk Fitch had come on board and had been shadowing Bob with the plan to take over, so I immediately called him.”

Several weeks later, the OVAC All-Star Game, including the camp at Bethany College, went off seamlessly and DeCoy felt ready for the fall. One of the aspects of the game that DeCoy was most excited about many people may not have even noticed.

“Bob Koch was able to attend the game, which was his 19th as the director,” DeCoy explained. “That really meant a lot to Dirk (Fitch) and I that he was able to do that.”

With the all-star game in the rear-view mirror, it was onward to the 2019-20 school year and the plethora of championships, meetings and other commitments that come with guiding a 50-member conference.

DeCoy prepared himself for the job by serving as Rataiczak’s intern for upwards of 18 months. That paid dividends.

“It flowed very smoothly,” DeCoy said. “Once we got through the all-star game, the fall sports (football, cross country, soccer, golf and volleyball) went off fine. There weren’t a lot of hurdles because the people who work within the OVAC on the different events are so good and know what to do without being told.”

The majority of the winter sports went well, too. Champions were crowned in wrestling, swimming, basketball and for the first time bowling, which was an event sponsored by Belmont College.

“Being able to be part of kicking off the inaugural year of bowling was exciting,” DeCoy said. “It was a huge success, too. It just gives kids another chance to shine on the big stage.”

When he began his new position, one of the individual goals DeCoy set for himself was to expand the visibility of the OVAC more in the community. He began that process by traveling to all five OVAC football champions and formally presenting their trophies.

“It was neat to get in front of the school and kids to be able to do that,” DeCoy said. “I went to Indian Creek’s playoff pep rally and Oak Glen’s bonfire. Fort Frye held an assembly. It was just really neat and there was a lot of appreciation for it, too.”

DeCoy has also expanded the OVAC’s presence on social media and he’s aiming to provide more “client outreach” to the member schools. An additional goal he’s set for himself is to double the amount of OVAC scholarships that are presented each year.

“I am big on getting out and about, so you’ll see more of that,” DeCoy said.

Because of the aforementioned pandemic, the all-star basketball game was canceled. That thwarted one of the new ideas that DeCoy had formulated.

“We had it arranged for the Belmont County Special Olympic all star team to play an Ohio County all star team between the boys and girls games,” DeCoy said. “It was a chance to give them their 10 minutes of fame on the big stage.”

As DeCoy and the OVAC sat and waited to see how Ohio and West Virginia handled the coronavirus and what the respective governors did about schools, it became a highly emotional time.

“It was very tough knowing what these kids, at that time, were in jeopardy of losing,” DeCoy said. “We continually were trying and talking with the commissioners on how can we salvage something? Each time new mandates and information came out from the governors or the two state associations, we’d immediately look into how can give them something.”

Unfortunately, it just wasn’t meant to be.

With that emotion still ringing in the back of his mind, arguably the first really big decision DeCoy had to make was what to do with the OVAC All-Star Football Game, which was scheduled two weeks from this weekend at Wheeling Island Stadium.

“All of our priorities start with safety,” DeCoy said. “We learned a lot from spring sports and if we don’t become a better conference because of what we learned in the spring then shame on us.”

In the end, considering all of the moving parts of the all-star experience and what the week involved, DeCoy simply felt he had no other option other than to cancel.

“There’s nothing like the OVAC All-Star Football Game,” DeCoy said. “To not have it wears on you because of what the game means to these kids and this valley. But, it still boiled down to safety.”

Never once since making the announcement has DeCoy had a second thought that he made the right decision.

“It might be in the back of your mind wondering how it was going to play out and it was definitely a tough decision, but it was also the correct decision,” DeCoy said.

The OVAC was able to pull off its ‘Banquet of Champions,’ but did so virtually in a television broadcasted event, which featured several special awards and a look back at the fall and winter champions.

“The virtual banquet was a win-win,” DeCoy said. “We were able to honor our student-athletes, meet our commitments to our sponsors and it’s a nice keepsake for the families. Plus, it opened the doors to people to watch who would normally never get to experience the banquet.”

Through all of the ebs and flows and adjustment process, DeCoy did his best to remain even keeled. He actually leaned on his times as a football and baseball coach, treating it very similarly.

“There really wasn’t any challenge that concerned me,” DeCoy admitted. “I wasn’t afraid of anything. I just didn’t let myself get too excited about the highs or too low about the lows.”

DeCoy gave his first year at the helm a grade of incomplete because of the impact COVID-19 made. And his second year grade may also be affected by the coronavirus.

“We’re just rolling with the punches, seeing what happens and we’re going to make the most of it,” DeCoy said.

STEUBENVILLE -- Football is a way of life in the Ohio Valley. It’s held in an even higher regard in ...

The Presidents Council of the Ohio Athletic Conference (OAC) has postponed all NCAA intercollegiate athletic ...