Be Local: How to help animal shelters during coronavirus outbreak 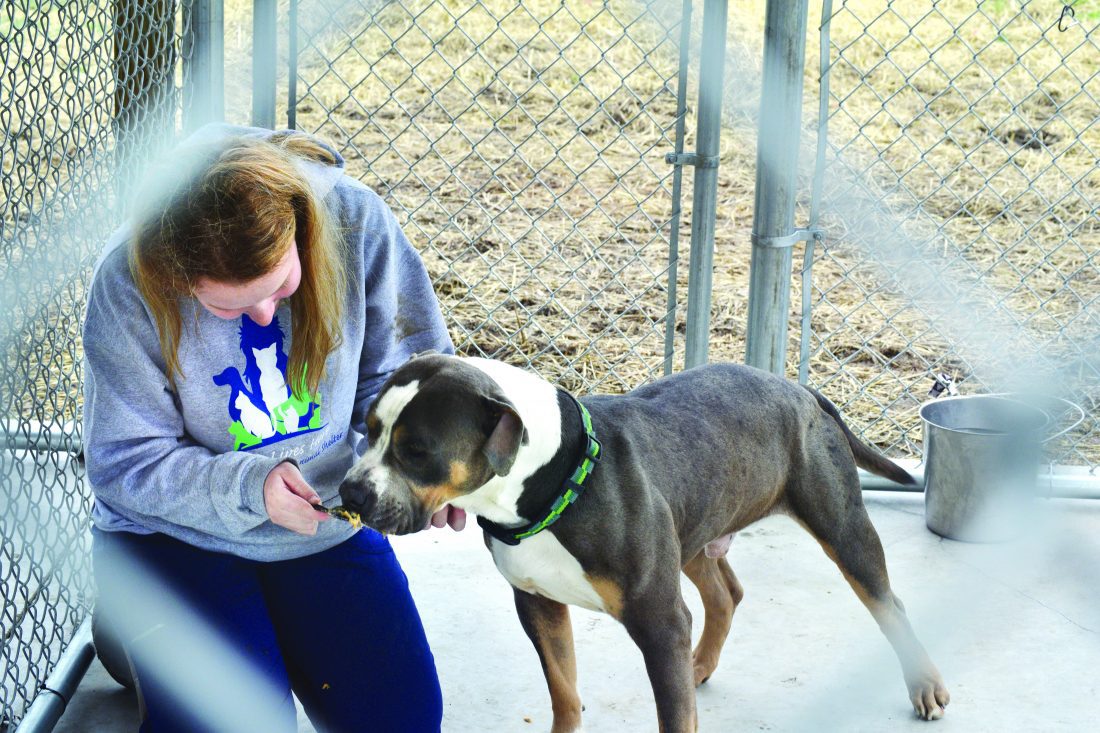 Photos by Scott McCloskey Marshall County Animal Shelter employee Emily Novotney gives a treat to a pit bull mix named “Max” that is up for adoption at the shelter.

WHEELING — Three local animal shelters have varied responses to how they are handling animal adoptions in response to the ongoing coronavirus crisis.

Marshall County Animal Shelter Director Brandon Henry said shelter workers are asking anyone who is interested in adopting a dog or cat to visit their website and fill out an application for approval before they would be allowed to visit with the animal at the shelter.

“Right now, we’re not open to the general public,” Henry explained, while referring to the actual facility.

But he said anyone who is interested in adopting a dog or cat can still go online to their website at www.mcwvanimalshelter.com and fill out an application to begin the process. He said once the application has been approved, an interested applicant will be provided the ability to stop at the shelter — one person at a time — to visit with the pet as shelter workers are following social distancing rules set by the state guidelines.

“We are trying to take as many precautions as we can,” Henry explained.

He said the shelter is currently only accepting pets if it’s absolutely necessary — such as when a stray is brought in or when someone can no longer care for the animal. Henry said anyone who finds a stray dog or cat is being asked to call 304-845-9770 and they will be advised what steps to take next by a shelter employee. If there is no answer, he said to leave a message and they will return your call.

Henry said while the shelter is currently not filled to scapacity, adoptions have slowed down in the wake of the coronavirus outbreak. He said they continue to take their dogs outside and walk them on a daily basis. In addition, anyone interested in donating pet supplies can leave them at the shelter’s front door. The shelter accepts pet food, dog treats, laundry detergent, bleach, towels and blankets.

The Ohio County Animal Shelter is “completely closed” until further notice in response to the coronavirus crisis, according to Ohio County Dog Warden Doug McCroskey Jr. He said they decided to temporarily stop pet adoptions in an effort to eliminate any “one-on-one contact” between employees and the general public.

McCroskey said he expects the shelter to reopen after the current government “stay-at-home” order guidelines are lifted, but the animals at the facility continue to be cared for by staff. He said anyone who is interested in making pet supply donations can still leave them at the front door of the Triadelphia facility.

Meanwhile, workers at the Belmont County Animal Shelter said the facility is closed, but they’re directing people to use their website at www.belmontcountyanimalshelter.com to fill out any applications for adoption. People can also leave donations at the front door. The county’s dog wardens are still going out on calls.