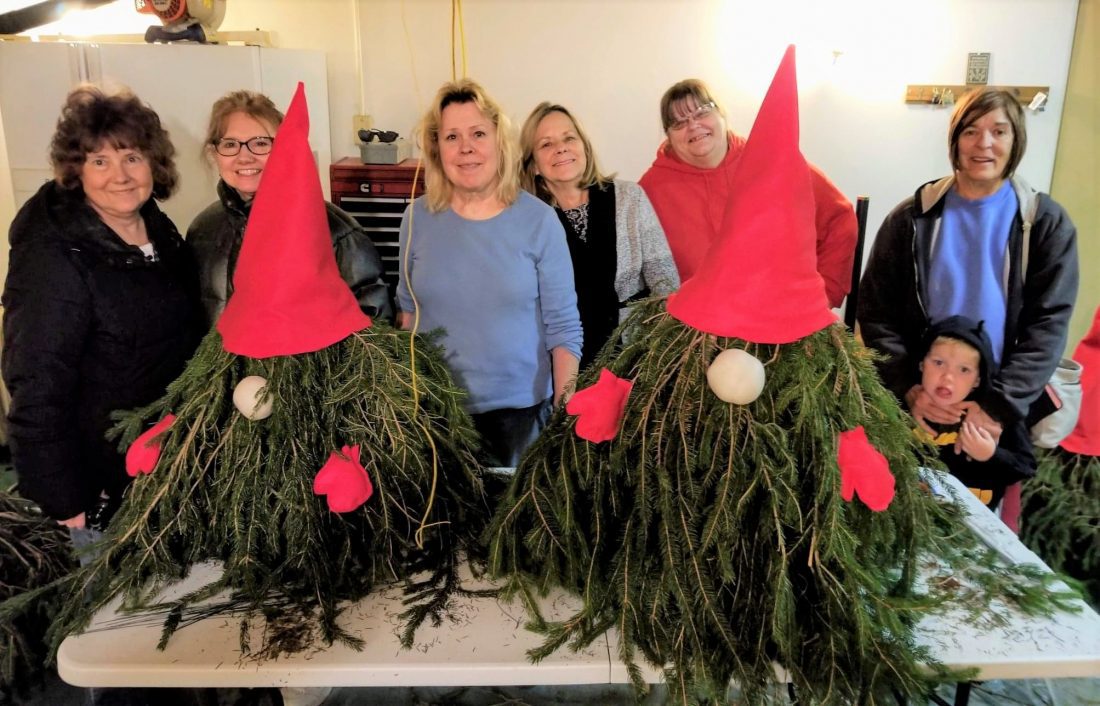 Posing with the Christmas gnomes they made are, from left, Gloria Bartyzel, June Jensicki, Kim Campbell, Caroline Williams, Lori Abraham, Roxanne VanGosen and her grandson Zachary.

DILLONVALE — Motorists traveling into the village of Dillonvale this holiday season will receive a warm welcome in the form of handmade pine green gnomes.

The decorations were made by members of the Dillonvale Rosebud Garden Club, said Lori Abraham, club secretary.

She noted the club was inspired to do the project after seeing the gnomes on Pinterest. Nine were made in all; some will be placed around the village as well.

The gnomes will make their first appearance on a float during the Dillonvale Christmas parade set for noon Dec. 7.

She said it took about two hours to make the whimsical creatures fashioned from upside tomato cages covered in pine tree trimmings, felt hats and gloves. The noses are made from stuffed knee stockings formed into a ball.

Abraham said club President Kim Campbell trimmed her own pine trees for the project. She also made ahead of time the hats and gloves.

Abraham noted the club’s past decorations have been well received by the community. One year, Campbell made sleds from pallet wood, decorated them and put them at the village’s entrances.

Abraham said the club, which was established in 1984, enjoys meeting at each other’s homes, making recipes with items from their gardens and socializing.

“They are a fun-loving group that likes to eat,” she said. “They’re not afraid to try new things.”

She noted during the past couple years the garden club has started growing and trying different types of herbs. Even edible flowers have been used in recipes. For example, one member made rose butter by incorporating real rose petals from her garden.

The club meets the third Wednesday of each month usually at 6 p.m. and a different member’s house each time. For more information about attending or joining, call Treasurer Gloria Bartyzel at: 740-769-2663.