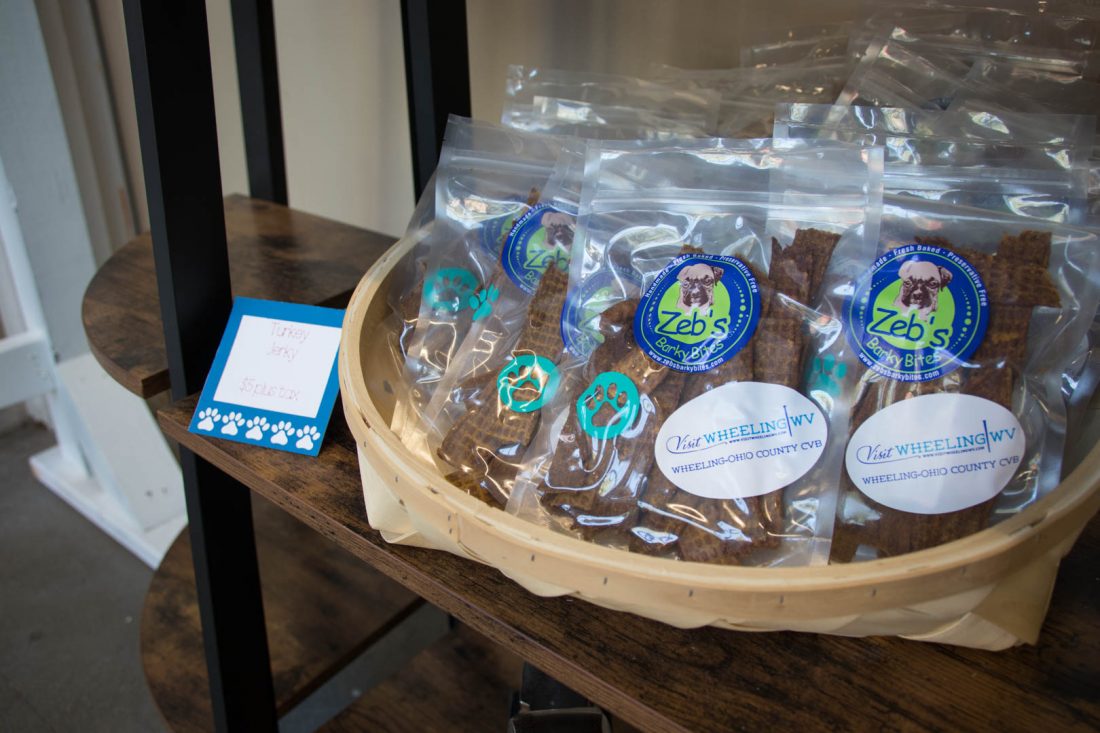 WHEELING — Entrepreneurship takes a lot of work to get right, and there are countless variables that ultimately affect how successful a business becomes.

Coming up with a vision, developing products, figuring out distribution and crafting a sustainable business model is tricky for anyone, much less a 10-year-old who has normal kid stuff to do. But, fueled by his ultimate love of dogs and a simple product, Zeb Helmick manages to be the figurehead of a pet treat company that is expanding — fast.

Of course he’s nudged in the right direction by his parents, and he’s also equipped with knowledge from the West Virginia University Extension Service. With that guidance, Zeb’s Barky Bites has grown in to something that not only benefits furry, four-legged animals, but also those involved in agriculture.

Zeb said his philosophy regarding his products is simple: He loves his four boxers, and when store-bought treats didn’t agree with them, the family started making their own treats. He thought other dogs should have access to the same high-quality, simple-ingredient treats.

“I don’t think dogs should have treats with a trillion ingredients in them,” he said.

He recounted pitching his idea first to his mother, Betsy, who instructed him to ask his father. After giving it a week to make sure the business model wasn’t just a passing notion, the family started to take the steps to get the ball rolling. They started product development and testing since the operation needed to ensure viable products as it scaled up.

Zeb’s father, Steve Helmick, explained there are two options to make their products shelf-stable — either fill them with preservatives or completely dehydrate them.

It’s here that the WVU Extension Service got involved, with Zeb and Steve attending a food dehydrating class taught by Litha Sivanandan, WVU Extension’s food safety and preservation specialist. They learned how to properly handle and prepare the products, and the proper dry times for a long shelf life.

By putting that knowledge to work to create a perfect product, the Helmicks have grown the business from their home with a standard, countertop dehydrator to one with commercial kitchen space in Wheeling’s Centre Market, complete with a large dehydrator and floor-stand and a large capacity mixer to make ample product to meet demand.

The move to Centre Market became reality after Zeb’s Barky Bites won $4,270 in a Wheeling’s “Show of Hands” competition one year ago, presenting the need to purchase the commercial appliances for the store front.

As the business grew so did the need for supplies, and WVU Ohio County Extension Service Agriculture and Natural Resources Agent Karen Cox helped the Helmicks connect the dots with local farmers and producers. They source their wheat flour from a local grower and also have a connection for local eggs. Steve noted that one of their latest products exclusively uses ingredients from within a 50-mile radius of Wheeling — save for the peanuts.

“Karen really believes in the power of agriculture as a force to drive West Virginia forward,” Zeb’s father said. “By connecting with suppliers in our region, we know exactly what’s happening to the products and how they’re handled. Ultimately that helps us stay true to the vision of providing simple, but tasty, treats for pets that are free of chemicals and additives.”

The Helmicks started selling at farmers’ markets in the area and have since expanded to be vendors at larger festivals and events in the Wheeling area. They’re also set up with wholesalers, such as the Mountain People’s Co-Op in Morgantown and the West Virginia Grown pop-up store at the State Fair of West Virginia. All that is in addition to their vendor space at the Centre Market.

While there’s something to be said about the merits of learning all things related to business ownership at a young age, Zeb’s favorite part of the business revolves around the core of why it got started in the first place.

“My favorite part is meeting all the dogs,” he said.

And by sticking to his vision, with support from his parents and community resources, they believe the company should have success for years to come.