Clampdown on vaping could send users back toward cigarettes 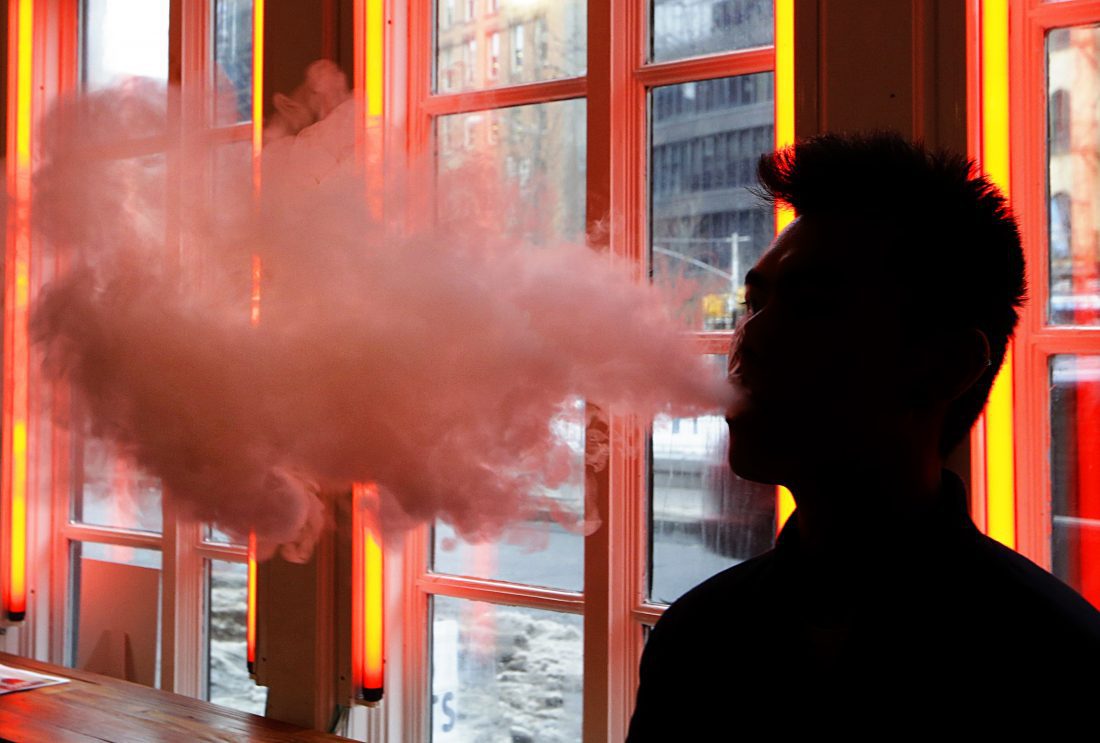 FILE - In this Feb. 20, 2014, file photo, a patron exhales vapor from an e-cigarette at a store in New York. Only two years ago e-cigarettes were viewed as holding great potential for public health: offering a way to wean smokers off traditional cigarettes. But now Juul and other vaping companies face an escalating backlash that threatens to sweep their products off the market. (AP Photo/Frank Franklin II, File)

WASHINGTON (AP) — Only two years ago, electronic cigarettes were viewed as a small industry with big potential to improve public health by offering a path to steer millions of smokers away from deadly cigarettes.

That promise led U.S. regulators to take a hands-off approach to e-cigarette makers, including a Silicon Valley startup named Juul Labs, which was being praised for creating “the iPhone of e-cigarettes.”

Today Juul and hundreds of smaller companies are at the center of a political backlash that threatens to sweep e-cigarettes from store shelves nationwide as politicians scramble to address two separate public health crises tied to vaping: underage use among teenagers and a mysterious and sometimes fatal lung ailment that has affected more than 1,000 people.

New restrictions at the local, state and federal level are poised to wipe out thousands of fruit-, candy- and dessert-flavored vapes that have attracted teens. But experts who study tobacco policy fear the scattershot approach of the clampdown could have damaging, unintended consequences, including driving adults who vape back to cigarette smoking, which remains the nation’s leading preventable cause of death.

“This could take us from potentially the single biggest improvement in public health in the United States toward a public health disaster in which cigarettes continue to be the dominant nicotine product,” said Jonathan Foulds, an addiction researcher and tobacco specialist at Penn State University.

Foulds and many other experts continue to view e-cigarettes as a potential “off-ramp” for smokers, allowing them to continue using nicotine — the addictive chemical in cigarettes — without inhaling all the toxic byproducts of burning tobacco.

But they warn the vaping backlash could do irreparable harm to the public perception of e-cigarettes, while ignoring the riskiest products that are most likely to blame for the recent outbreak.

Federal investigators say that nearly 80 percent of people who have come down with the vaping illness reported using products containing THC, the high-inducing chemical found in marijuana. They have not traced the problem to any single product or ingredient. But investigators are increasingly focused on thickeners and additives found in illegal THC cartridges sold on the black market.

On Friday, the Food and Drug Administration specifically warned the public not to vape THC or purchase any vaping products off the street.

THC vapes are separate from the legal, nicotine-filled e-cigarettes being targeted by President Donald Trump and politicians across the country.

Democratic governors in New York, Michigan, Washington, Rhode Island and Oregon have followed the president’s plan to ban flavored e-cigarettes nationally with their own state-level flavor restrictions. Massachusetts’ Republican governor has gone even further, placing a four-month moratorium on sales of vaping products of any kind.

“The problem here is we have convinced adult America that vaping is as dangerous as smoking — and nothing could be further from the truth,” said Kenneth Warner, professor emeritus at the University of Michigan’s school of public health.

E-cigarettes generally heat a flavored nicotine solution into an inhalable aerosol. There is little research on the long-term effects of inhaling the chemicals in vaping, such as vegetable glycerin. Despite those unknowns, most experts agree e-cigarettes pose a much smaller risk than cigarettes, which cause cancer, lung disease and stroke and account for some 480,000 U.S. deaths each year.

And while the flavor bans are likely to curb teen vaping, Warner and others point out that those policies won’t prohibit flavors in traditional tobacco products. That means both teens and adults could wind up switching to deadlier menthol cigarettes or flavored cigars, which come in coffee, raspberry, chocolate and hundreds of other varieties.

The policy debate underscores the challenge of finding the right regulatory scheme for e-cigarettes, products for which there is little high-quality research.

More than 30 countries prohibit vaping products. In contrast, the United Kingdom has fully embraced them as a public health tool, urging doctors to promote them to help smokers quit.

The U.S. FDA has been struggling to find the right approach since it gained authority over e-cigarettes in 2016.

The agency repeatedly delayed its deadline to begin reviewing e-cigarettes, a step that critics say allowed products like Juul to catch on with teenagers. At the same time, e-cigarette companies and proponents say the agency’s new review deadline of next May is too aggressive and will force most companies out of business.

Now the agency is trying to walk a tightrope between keeping e-cigarettes away from teens but preserving them for an estimated 10 million adults who use them, most of whom also smoke.

Further complicating the picture is the fact that no e-cigarette brand has yet been shown to help smokers quit in rigorous studies. But large-scale surveys suggest smokers who use e-cigarettes daily are up to six times more likely to quit than those who don’t use them.

The statistics favoring e-cigarettes are bolstered by the experiences of people like Laura Adams, 52, of Battle Creek, Michigan.

A smoker since age 16, Adams was rushed to the hospital in April when a coughing fit left her struggling to breathe. Doctors diagnosed her with chronic obstructive pulmonary disorder, or COPD, and told her she needed to quit cigarettes.

For more than 25 years previously, Adams had smoked clove-flavored cigarettes. When the government banned those in 2009, she switched to flavored cigars.

After her medical emergency, Adams tried a series of e-cigarettes at a local vape shop before settling on a large, refillable device that allowed her to switch between flavors like blueberry, watermelon and peach.

“As far as I’m concerned, flavored vaping juice saved my life,” Adams said. “It gave me the option of continuing with my nicotine but without destroying my lungs.”

As Michigan stores pull their flavored products to comply with the state ban, Adams has been researching out-of-state suppliers and even do-it-yourself kits for mixing flavors.

But some public health advocates fear less motivated ex-smokers will simply return to cigarettes. Even with the success of Juul, e-cigarettes remain a tiny slice of the U.S. tobacco market, accounting for $8.6 billion in sales compared to $95 billion for cigarettes, according to Euromonitor.

Industry analysts point to early indicators that e-cigarette sales are beginning to flag amid the bans and negative headlines. E-cigarette sales slowed by 11 percent over the four weeks ended Sept. 22, according to retail data tracked by Nielsen.

That’s exactly the opposite of what public health officials have been trying to achieve, noted former FDA Commissioner Scott Gottlieb, who stepped down in April.

As FDA chief, Gottlieb outlined an ambitious anti-smoking plan intended to shift most of the nation’s 34 million smokers away from cigarettes and toward less risky products. The unprecedented plan involved a two-step process: cutting nicotine in traditional cigarettes to make them virtually nonaddictive and then promoting FDA-sanctioned, lower-risk alternatives, such as e-cigarettes.

But the agency has yet to unveil its proposal for cutting nicotine. And a separate proposal to ban menthol cigarettes is still in regulatory limbo.

So as the agency begins sweeping flavored e-cigarettes off the market in coming months, Gottlieb fears smokers may revert to regular cigarettes and cigars, which will still have nicotine levels and flavors designed to addict users.

“This was always a package deal, and it’s become even more critical than ever to advance that entire policy agenda,” he said.

The FDA says it remains committed to Gottlieb’s vision of lower-nicotine cigarettes and less-harmful alternative products. The agency’s regulatory calendar lists this month as the target date to release its proposal for regulating nicotine. But that effort will take years to implement and will almost certainly face lawsuits from tobacco companies.

Meanwhile, it remains unclear which e-cigarettes — if any — will survive the FDA review process set to begin in May.

Under agency standards, only vaping products that represent a net benefit to the nation’s public health are supposed to be permitted. Proving that standard will require companies to submit detailed analysis of their ingredients and population-level estimates of how their products will impact both adult and underage users.

Industry observers say few, if any, of the thousands of vape shops that mix their own custom flavors and solutions will be able to meet the threshold.

“It’s ironic that the vape shops, who really championed e-cigarettes for smoking cessation, are going to be out of business,” said Dr. Neal Benowitz, a nicotine and tobacco researcher at the University of California San Francisco.

That leaves a handful of industry heavyweights such as Juul, which could benefit from billions in research funding from Marlboro-maker Altria, the tobacco company that owns a 35 percent stake in the vaping firm.

But Juul has been besieged by lawsuits and investigations into its alleged role in triggering the explosion of teen vaping. That history could block the company from ever winning FDA approval for its current device, according to former FDA officials.

The uncertainty swirling around vaping could clear the path for another product that is neither a traditional cigarette nor an e-cigarette.

Earlier this year, the FDA authorized the sale of a first-of-a-kind device, IQOS, that heats tobacco without burning it. The approach is designed to mimic the experience of smoking while producing fewer toxic chemicals than paper-and-tobacco cigarettes.

The battery-powered device is getting a preliminary launch this month in Atlanta ahead of a wider rollout. But IQOS’s pedigree underscores the persistence of Big Tobacco companies, even in a world increasingly focused on vaping and other alternative products.

IQOS was developed by Philip Morris International, the global tobacco giant that sells Marlboro cigarettes overseas. It will be sold in the U.S. by the biggest American cigarette maker, Altria, which is also Juul’s biggest investor.