House approves bill to ban the sale of flavored e-cigarettes 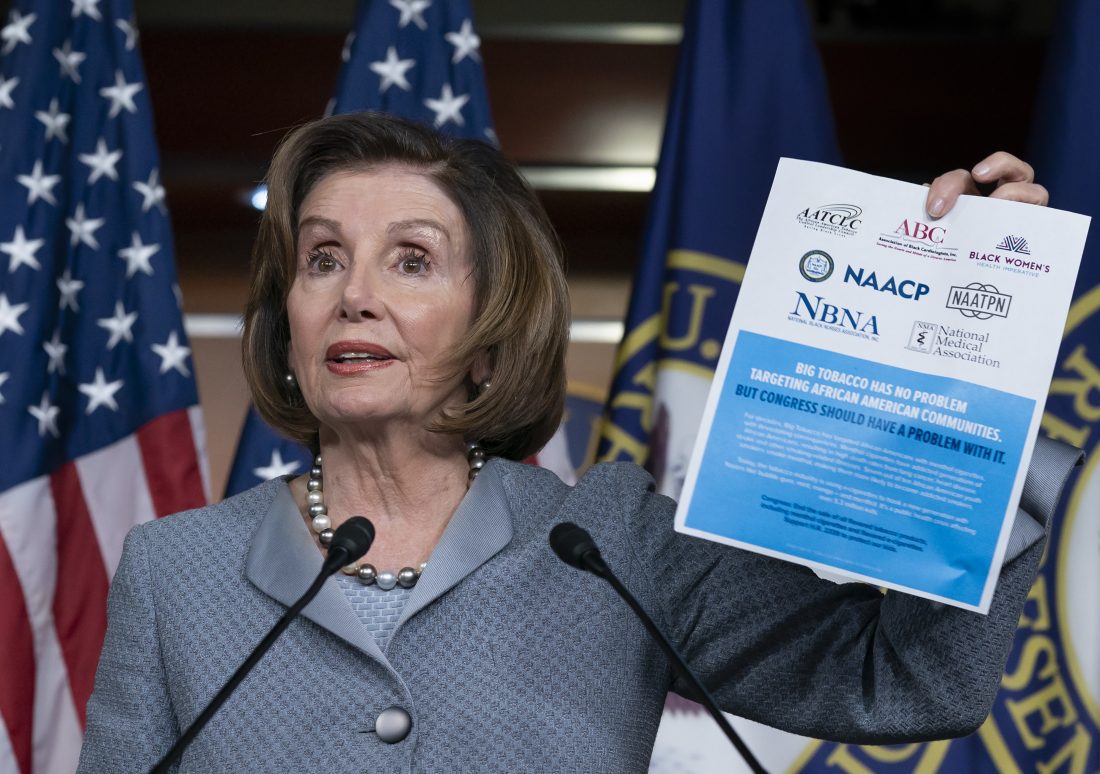 Speaker of the House Nancy Pelosi, D-Calif., displays an advocacy ad that criticizes the tobacco and vaping industry for allegedly targeting young African-Americans, during a news conference on Capitol Hill in Washington, Thursday, Feb. 27, 2020. The House is voting on a measure to reverse the tobacco epidemic among young people. (AP Photo/J. Scott Applewhite)

WASHINGTON (AP) — Moving to stem a vaping epidemic among young people, the House approved a bill Friday to ban the sale of flavored e-cigarettes and other flavored tobacco products.

The bill would place new restrictions on the marketing of e-cigarettes and ban flavors in tobacco products, including menthol cigarettes. It also would place a new excise tax on nicotine.

The House approved the bill, 213-195, sending it to the Senate, where approval is considered unlikely. The White House said in a statement that President Donald Trump’s administration opposes the bill.

Supporters, mostly Democrats, said the legislation provides a comprehensive strategy to reverse a teen vaping epidemic that officials fear is hooking a generation of young people on nicotine. In the latest government survey, more than 1 in 4 high school students reported using e-cigarettes in the previous month. Late last year, Congress approved a law raising the minimum age to buy all tobacco and vaping products from 18 to 21 nationwide.

Opponents said the House bill went too far, noting that the new law raising the age of tobacco use has been in effect for only two months. Earlier this year, the Trump administration issued rules that prohibit fruit, candy, mint and dessert flavors from small, cartridge-based e-cigarettes like Juul, the most popular brand in the U.S.

“White adult smokers would see little difference in their lives after this ban, while black smokers could face even more sweeping harassment from law enforcement if the hint of menthol smoke can justify a stop” by a police officer, said Rep. Yvette Clarke, D-N.Y.

Clarke invoked Eric Garner, a black New York man who died after being put in a chokehold by police officers who stopped him for selling loose, untaxed cigarettes.

“As Eric Garner’s mother knows all too well, in New York a single cigarette can become a death sentence,” Clarke said.

Supporters said the House bill would have huge health benefits for teenagers who increasingly use e-cigarettes and vape products with flavors such as mango, bubble gum and cotton candy.

E-cigarettes are battery-powered devices that typically heat a flavored nicotine solution into an inhalable aerosol. They have been pitched to adults as a less-harmful alternative to traditional cigarettes, but there is limited data on their ability to help smokers quit.

“Tobacco companies will not give up, but we will not, either,” said Rep. Donna Shalala, D-Fla., a former Health and Human Services secretary who co-sponsored the bill.

Vaping “is the public health crisis of the 21st century,” Shalala said, adding that nicotine exposure during youth and young adulthood is particularly dangerous. Children who use flavored e-cigarettes likely would not do so without flavors that mask the product’s harshness, she and other supporters said.

“It’s clear the tobacco industry has employed the same tactics that they have used for decades to hook young people on new versions of their products in order to generate new customers that will be addicted for life,” said Rep. Frank Pallone, D-N-J., the bill’s lead sponsor.

E-cigarette manufacturers such as Juul Labs use “slick product designs, glossy advertisements and sweet flavors to appeal to kids,” Pallone said. The rapid rise of vaping has reversed decades of declines in youth tobacco use, he said.

Some e-cigarettes look like regular cigarettes or cigars. Some look like USB flash drives, pens and other everyday items.

The Vapor Technology Association, an industry lobbying group, said the House bill would do little to protect youth while hurting millions of adults who rely on vaping to quit smoking.

“Bans don’t work. They never have,” said Tony Abboud, the group’s executive director. The proposed excise tax would likely lead to an increase in smoking, he said.

Juul Labs said in November that it was halting U.S. sales of its best-selling, mint-flavored e-cigarettes as it struggled with a nationwide backlash against vaping. The company stopped selling popular fruit and dessert flavors in stores in 2018 and stopped selling them online last year.

Rep. Greg Walden, D-Ore., said he shared Pallone’s concern about the epidemic of youth tobacco usage, but he said lawmakers also should address easy access to marijuana. He cited the death of an Oregon man who used an electronic cigarette containing marijuana oil from a legal dispensary.

“Denouncing smoking tobacco in all forms while embracing the (decriminalization) or legalization of marijuana is at best inconsistent when considering long-term health outcomes,” Walden said.

The White House said in a statement that the bill “contains provisions that are unsupported by the available evidence regarding harm reduction and American tobacco use habits.” It also may restrict access by adult e-cigarette users to “products that may provide a less harmful alternative” to traditional cigarettes, the White House said.

Five Republicans joined 208 Democrats to support the bill. Seventeen Democrats — including eight members of the black caucus — opposed the bill.

DES MOINES, Iowa (AP) — Within weeks of Gov. Kim Reynolds agreeing to allow bars and restaurants to open to ...