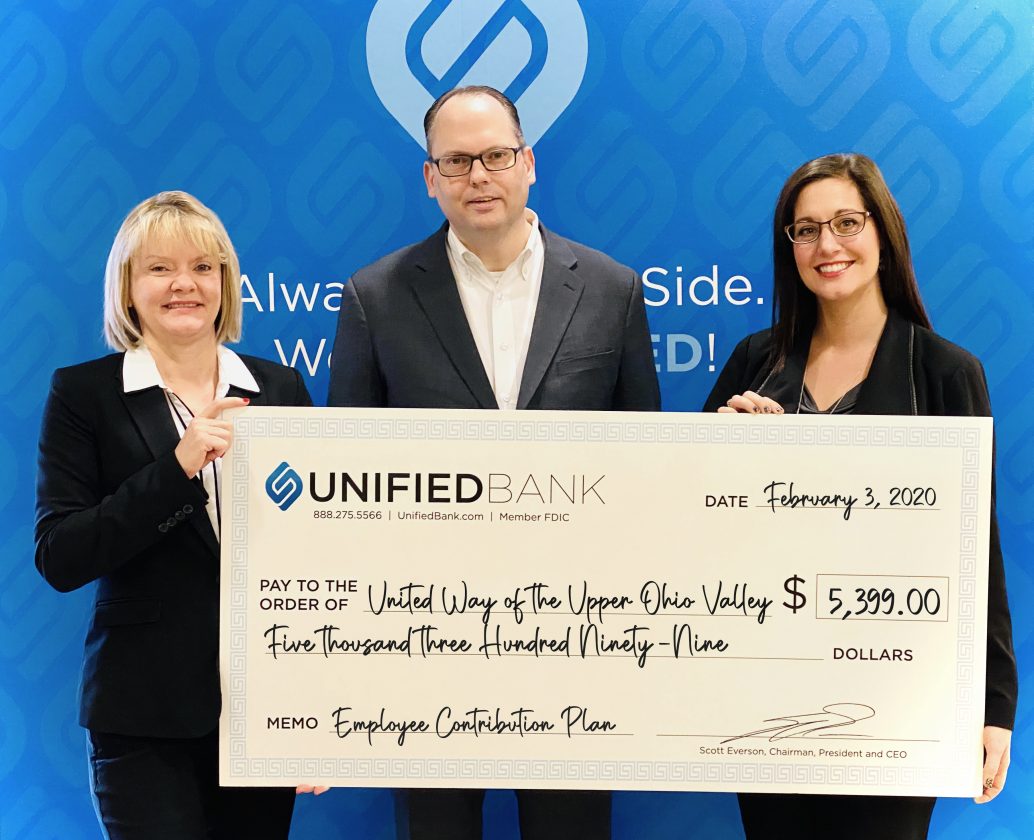 MARTINS FERRY — Unified Bank employees raised $5,399 for charities through the United Way of the Upper Ohio Valley’s employee giving plan last year. The giving plan allows employees of companies to donate to their special causes through a deduction to their payroll. The amount determined by employees who wish to participate is deducted from every pay before taxes.

Last year’s biggest contributor was Michael Goclan, senior commercial banking executive with Unified Bank, who donated to local Boy Scouts of America through the giving plan. An Eagle Scout himself and father of two sons, both Eagle Scouts, Goclan believes it is important to contribute to worthy causes such as Boy Scouts.

“I started giving $1 a pay back when I started working for Unified Bank 20 years ago,” Goclan said. “Over the years I increased my commitment as my salary went up.”

Angie Coe, retail banking executive and assistant CRA officer for Unified Bank, works with the United Way to help facilitate the giving plan. She pointed out that the giving plan is designed in such a way that employees who wish to participate pick an amount they are comfortable with and can either choose where their donations go or leave that decision to the United Way. She added that 100 percent of all donations go to the charitable causes.

United Way Executive Director Jessica Rine said, “Employee campaigns are an easy way for employees to give back to their community, and over the years Unified Bank has been a great partner with the United Way. The community-minded generosity of Unified Bank and their employees is very much appreciated.”

Unified Bank President and CEO Scott Everson added that Unified Bank also sponsors the United Way in all of Unified’s regions, but that this amount was the result of employee giving.

“This is one way Unified’s team members show their commitment to Unified Bank’s core values by being deeply committed to the communities and people we serve,” Everson said.

Unified Bank is a full-service FDIC-insured, state-chartered commercial bank headquartered in Martins Ferry with 19 locations that serve the Ohio counties of Athens, Belmont, Carroll, Fairfield, Harrison, Hocking, Jefferson and Tuscarawas. The bank also has a Loan Production Office in Wheeling.

DES MOINES, Iowa (AP) — Within weeks of Gov. Kim Reynolds agreeing to allow bars and restaurants to open to ...