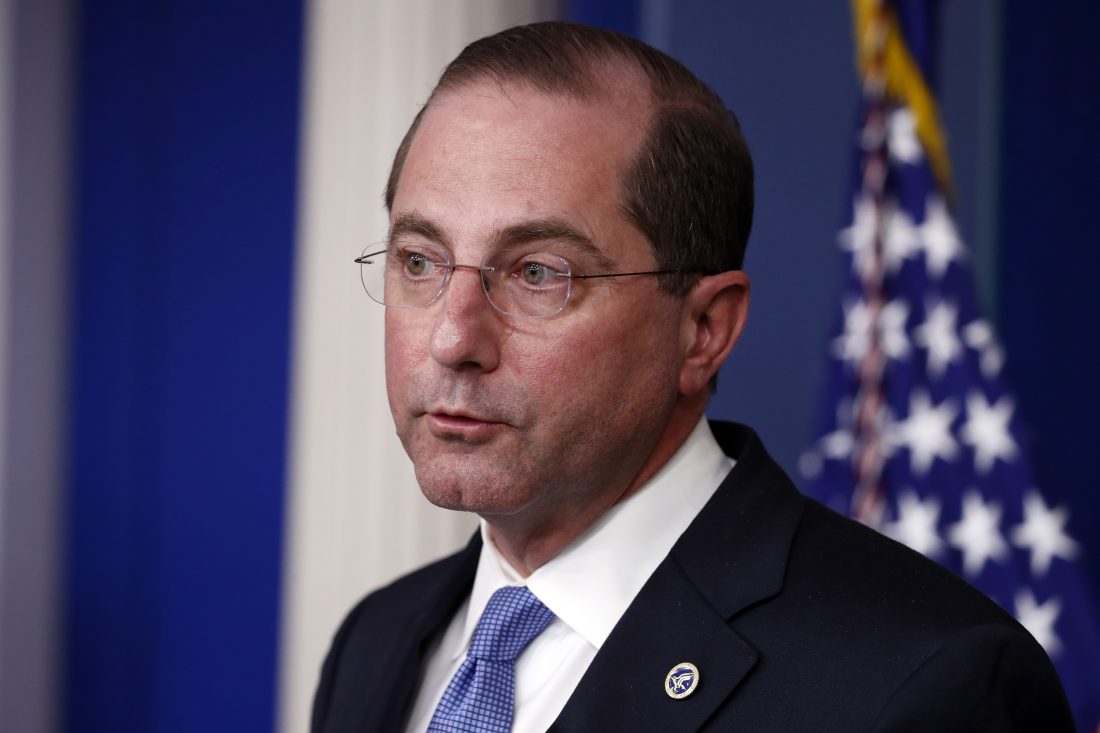 WASHINGTON (AP) — The head of a government agency combating the coronavirus pandemic is alleging that he was ousted for opposing politically connected efforts to promote a malaria drug that President Donald Trump touted without proof as a remedy for COVID-19.

Rick Bright, former director of the Biomedical Advanced Research and Development Authority, said in a statement Wednesday that he was summarily removed from his job on Tuesday and reassigned to a lesser role. His lawyers, Debra Katz and Lisa Banks, called it “retaliation plain and simple.”

Controversy has swirled around the malaria drug hydroxychloroquine since Trump started promoting it from the podium in the White House briefing room.

BARDA, the agency that Bright formerly headed, is a unit of the Department of Health and Human Services created to counter threats from bioterrorism and infectious diseases. It has recently been trying to jump-start work on a vaccine for the coronavirus.

“I am speaking out because to combat this deadly virus, science — not politics or cronyism — has to lead the way,” Bright, who has a doctoral degree in immunology, said in his statement, which was released by his lawyers.

“Specifically, and contrary to misguided directives, I limited the broad use of chloroquine and hydroxychloroquine, promoted by the administration as a panacea, but which clearly lack scientific merit,” Bright said.

“I also resisted efforts to fund potentially dangerous drugs promoted by those with political connections,” he added.

Asked about Bright at Wednesday’s briefing, Trump said he “never heard of him.”

Bright and his lawyers are requesting investigations by the HHS inspector general and by the Office of Special Counsel, an independent agency that has as part of its charge the protection of government whistleblowers.

“While I am prepared to look at all options and to think ‘outside the box’ for effective treatments, I rightly resisted efforts to provide an unproven drug on demand to the American public,” Bright wrote.

He also alluded to “clashes with HHS political leadership” over his efforts to “invest early in vaccines and supplies critical to saving American lives.” One of the major criticisms of the Trump administration’s pandemic response is that little was done in the month of February to stockpile needed equipment.

“Science, in service to the health and safety of the American people, must always trump politics,” Bright said.

Trump has repeatedly touted the malaria drug during his regular coronavirus briefings, calling it a “game changer,” and suggesting its skeptics would be proved wrong. He has offered patient testimonials that the drug is a lifesaver.

But a recent study of 368 patients in U.S. veterans hospitals found no benefit from hydroxychloroquine — and more deaths. The study was an early look at the medication, which has prompted debate in the medical community, with many doctors leery of using it.

In a statement, HHS confirmed that Bright is no longer at the BARDA agency, but did not address his allegations of political interference in scientific matters.

HHS said it was Bright who had requested an emergency use authorization for chloroquine and hydroxychloroquine. For his part, Bright said he had insisted that the authorization be limited to a restricted group of patients, those hospitalized with confirmed COVID-19 under the supervision of a doctor.

Hydroxychloroquine was given to patients in the New York area, the nation’s most intense COVID-19 hot spot. It is usually administered in combination with the antibiotic azithromycin.

The HHS inspector general’s office had no response to Bright’s request for an investigation. But on Capitol Hill, the list of Democrats calling for an inquiry grew on Thursday.

“Removing Dr. Bright in the midst of a pandemic would raise serious concerns under any circumstances, but his allegations that political considerations influenced this decision heighten those concerns and demand full accountability,” said Rep. Frank Pallone of New Jersey, chairman of the Energy and Commerce Committee.

An official biography describes Bright as a flu and infectious-disease expert who joined the agency 10 years ago and was focused on vaccine development. He also held the title of HHS deputy assistant secretary for preparedness and response, reporting to Dr. Robert Kadlec.

“Dr. Bright continues a very successful tenure in leading BARDA performing an essential (HHS) mission of developing and acquiring medical countermeasures for the Strategic National Stockpile,” wrote Kadlec, his boss, adding “I have confidence” that Bright would meet future challenges facing the agency.

A copy of Bright’s performance review was provided to The Associated Press.

HHS said Bright is now assigned to the National Institutes of Health, working on new approaches to testing.

His allegations were first reported by The New York Times.