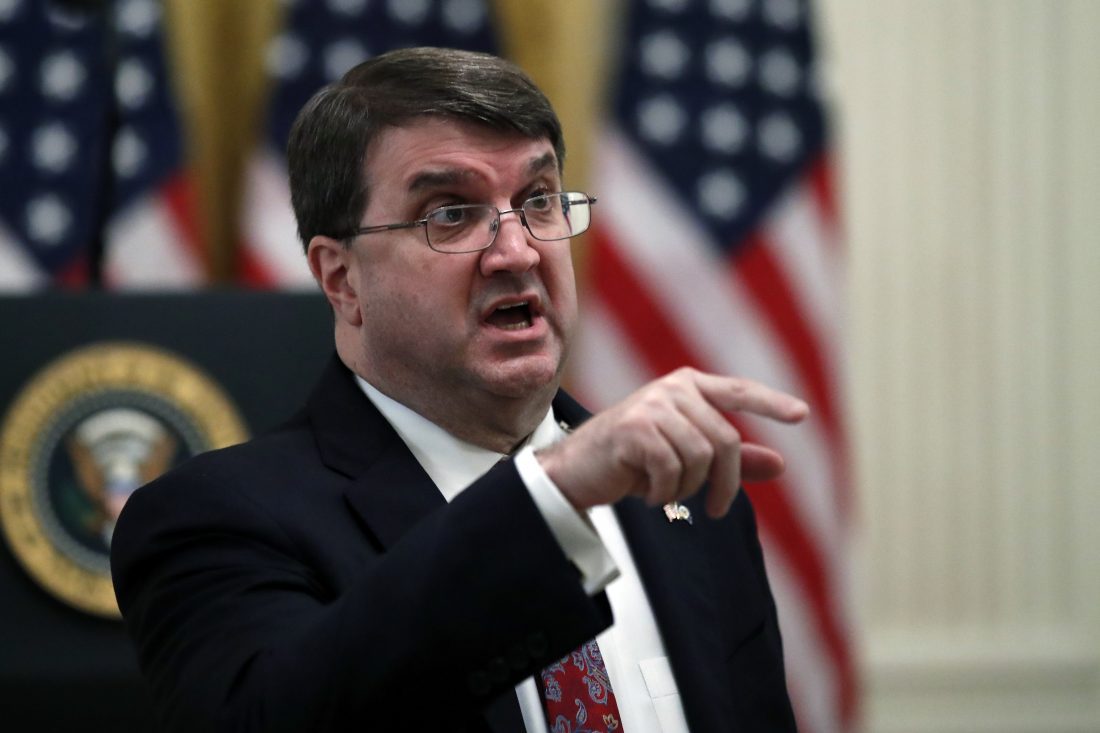 WASHINGTON (AP) — Returning Internal Revenue Service workers in Kansas City are being directed to a room well-stocked with face masks, while some other IRS offices were still telling staffers to buy or make their own as the Trump administration starts rolling out a location-based plan for returning more of the some 2 million federal workers to job sites.

The administration says the broad discretion in its coronavirus guidelines will allow agency heads to get federal workers back first in areas where rates of cases are lower and where protective measures and health care are robust. Officials for unions representing the federal government’s civilian workforce are expressing cautious approval at some of the spot-by-spot plans being drawn up, but they still fear workers will be ordered back and risk infection as President Donald Trump tries to push the U.S. economy back up on its feet.

So far, it’s only a partial return bringing back comparatively few of the federal employees sent home for safety amid the outbreak. But with the U.S. still among the hardest hit in an outbreak that has killed 275,000 people around the world, some federal workers fear they’ll be political pawns.

“Trump just wants to bring people back, because he wants to reset the economy. The one workforce he has control over is the federal workforce,” said Nicole Cantello, a staffer in the Environmental Protection Agency’s Chicago region, and a local president of the American Federation of Government Employees, a union representing federal workers.

Guidelines late last month from the White House Office of Management and Budget and the federal Office of Personnel Management call for phased returns based partly on local conditions, such as whether there have been 14 straight days of declining cases of coronavirus and flu. But the federal guidelines largely shy away from mandates, such as any directives to make protective gear available to all federal workers.

“Agencies should tailor mitigation measures to the specific type of workplace and occupation,” while protecting the health of the public and federal work force “and promoting economic recovery,” the late April guidelines say.

After the IRS initially told workers volunteering to return to bring – or make – their own masks, Democratic lawmakers have asked for more detail on how and when the administration planned to bring federal workers back.

OMB spokesman Rob Kuhlman on Friday defended the administration’s balancing of the safety of federal workers and the public need for federal services.

“It’s no surprise Democrats continue to play politics, but the fact is agencies have been given clear and consistent guidance throughout this crisis to maximize telework, and they are now working to return to normal operations as conditions warrant across each state,” Kuhlman said by email.

Incentives have been offered to some of those who choose to go back; some 11,000 IRS workers were given pay bumps of between 10% and 25% to return to about 20 offices around the country, said Chad Hooper, president of the Professional Managers Association, a national group representing federal management-level employees.

Returning workers were finding stacks of tens of thousands of pieces of unopened mail from taxpayers – and also agency-set mandates to wear masks in public areas, as well as signs limiting elevators to two employees at a time, among other infection-control measures, Hooper said.

A Kansas City IRS office that deals with complaints of identity theft was directing staffers to a set room to pick up masks and hand sanitizers, Hooper said.

Employees reported that some other offices still were telling workers to bring their own masks, however, he said. And employees were often uncertain about who was supposed to wipe down and sanitize work spaces, especially between shifts, IRS worker representatives said.

Overall, “we don’t always agree but they are really trying to do their level best to address issues and do what’s in the best interests of their employees,” said Tony Reardon, president of the National Treasury Employees Union.

Other workers in services dealing directly with the public – including park rangers and Veteran Affairs workers – will be priorities for the administration to bring back, the guidelines say.

Veteran Affairs Secretary Robert Wilkie told veterans organizations on his weekly call with them Wednesday that he hoped to have a rolling reopening starting this month first with facilities in the western US and then moving across the country based on local conditions on the East Coast.

Following concerns expressed by VA employees and its unions, the department recently issued guidance that it would provide N95 masks, surgical masks, gloves and other protective equipment to VA employees who provide direct care to patients at VA facilities. Previously, due to shortages of supplies, the VA only provided that protective gear to staff caring for coronavirus patients or the highest-risk veterans, putting all VA employees and their patients at greater risk of contracting the virus.

The Interior Department’s handling of the National Park Service had also been criticized during the broad economy-wide shutdown in late March, for allegedly moving too slowly to close national parks. Local governments around the Grand Canyon National Park and other iconic sites complained the parks – by staying open – risked flooding surrounding communities with contagion-carrying visitors.

Before those parks were shut down fully or partially, officials at the Great Smoky Mountain National Park and others said they were unable to control crowds to keep visitors at a safer six feet apart. Park rangers nationally were among scores of civilian federal employees falling ill with the coronavirus.

On Saturday, Great Smoky Mountains National Park – the nation’s most visited – was partially reopened, making the southeast U.S. park one of the most prominent returns of federal facilities so far.

Park officials’ outbreak plans included waiving entrance fees so as to minimize contact among rangers and visitors. On Twitter, some wildlife experts warned about the park’s famous black bears — saying they were likely to have grown emboldened while humans were holed up.