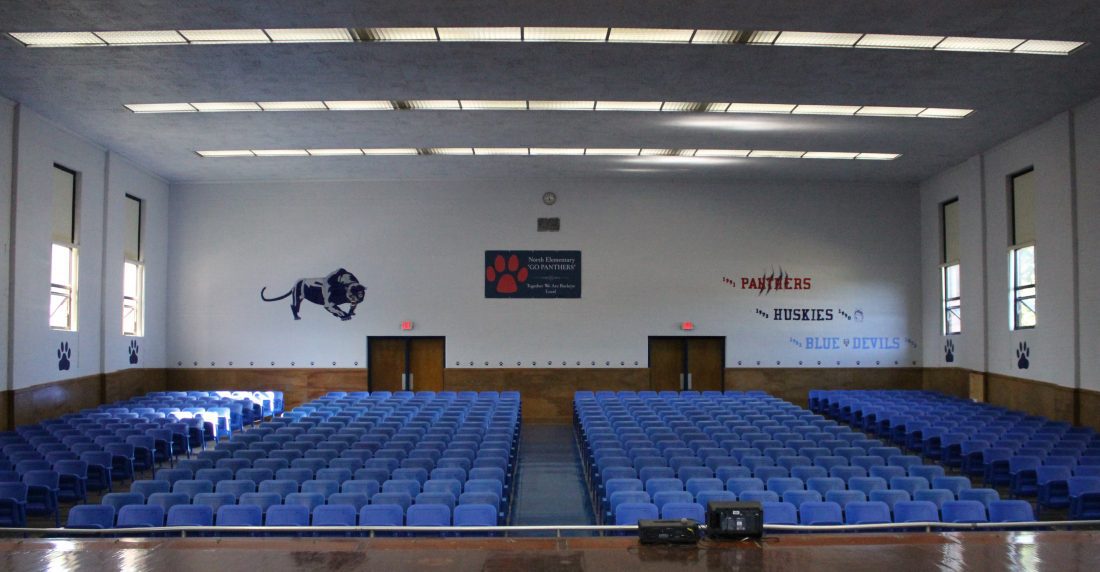 BRILLIANT — Panther pride is even greater at Buckeye North Elementary after the school showcased its newly remodeled auditorium.

School officials, faculty, staff, students, parents, alumni and other community supporters were invited to the big reveal at the site in Brilliant last week, where leaders held an open house and ribbon-cutting ceremony in the connected gymnasium.

Bill McElwain, a trustee for the Charles M. and Thelma M. Pugliese Charitable Foundation, was on hand since the organization provided a $53,888 grant to help finance the work. A crowd assembled in the gym and officials literally pushed back the curtains to display the finished product.

Principal Susan Nolan was excited to see the project come to fruition after nearly a year in the making. Nolan said the auditorium was due for a redo since its furniture dated back to 1952 and she was fortunate enough to win an auction bid on seating from the former Follansbee Middle School.

“It started last November. I knew Follansbee Middle was closing and one of our teachers saw the auction, and I bid in January and won,” she said. “Then I looked into getting more.”

She received nearly 300 seats from the former school and then contacted Martin Seating, a Michigan-based company, about acquiring the remaining 288 chairs. Nolan also applied to the Pugliese Foundation to assist with expenses and the school was awarded the grant last spring. The funding enabled leaders to purchase more seats, paint and even some security cameras to add around the building.

Although she hoped to have work completed this summer, crews were busy through the start of the new school year as company representatives dismantled and removed the old seats and installed the replacements. Volunteers helped paint the auditorium and school custodians busily cleaned and prepared the floors since the newer seats were larger, while sets of the older chairs were either purchased or recycled.

Buckeye Local High School students helped Nolan add paw prints along the walls while volunteers D.J. Eddy, Sonya Powell and Jeff Neilly also gave their time. At the conclusion, the nearly 600 new seats were added to the space and the room also received a fresh coat of paint, new LED lighting, plenty of Panther paws and some subtle homage to alumni for supporting the effort.

The names of the Panthers, Huskies and Blue Devils–the school’s current and previous mascots–now adorn one of the walls to pay tribute to the past.

Funds defrayed costs for labor to remove and replace the furniture and the purchase of several cameras for the auditorium, preschool wing and a public access area at the north end of the building. Nolan continued that school staff, alumni and others also donated money towards the lighting, extra paint and a plaque but any extra money may be used to host a program for the students.

“We’re really excited,” she concluded. “I want to thank everyone who donated their time, effort and money to make this possible.” 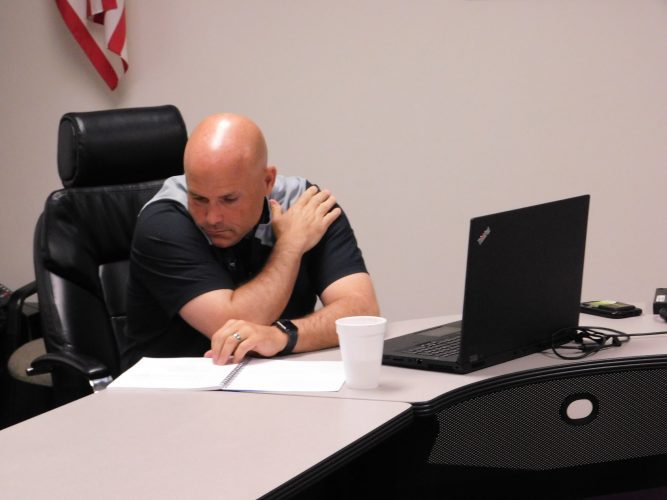