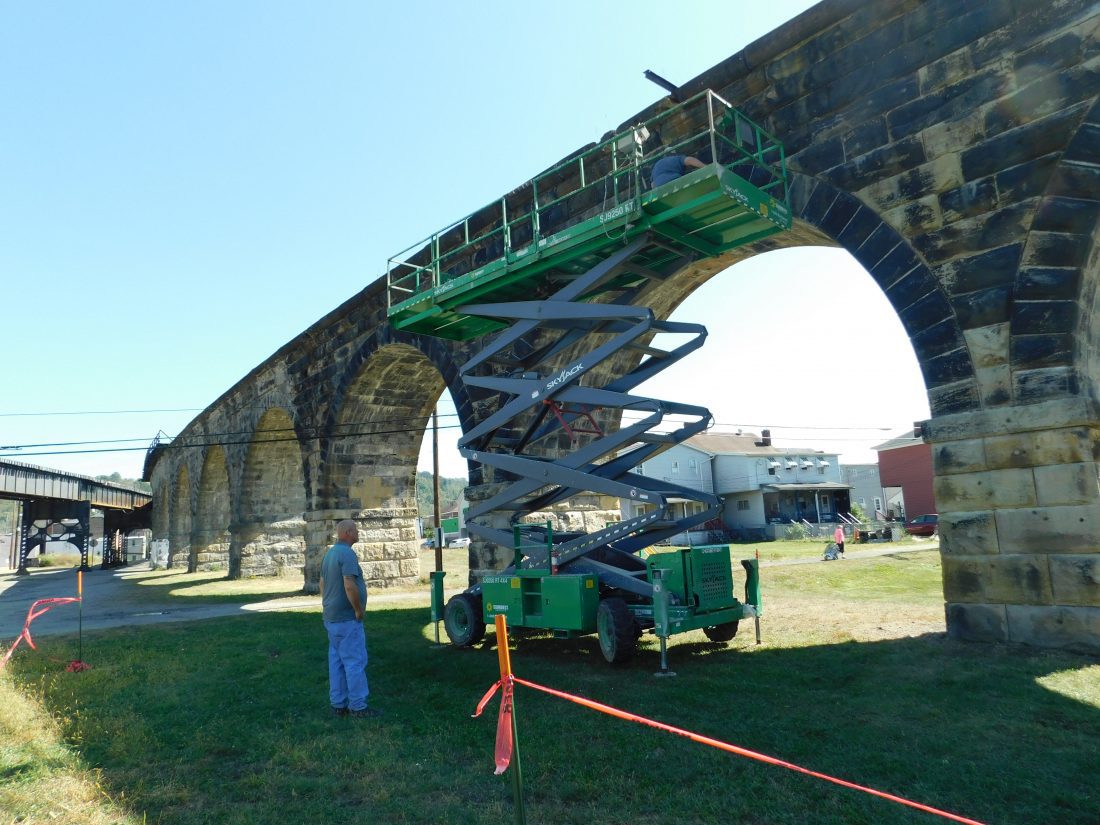 T-L Photo/ROBERT A. DEFRANK Work continues on the renovation of the Great Stone Viaduct in Bellaire, made possible with community organizations and fundraisers.

BELLAIRE — A community’s dedication is giving new life to a big piece of history as renovation work continues on the Great Stone Viaduct.

Standing under the arches and watching cleaning crews, Dan Frizzi, a member of the Great Stone Viaduct Historical Education Society board of trustees, said this was a milestone in a long-awaited project.

“This is going to be the first step in the development plans that we have here at the viaduct,” Frizzi said.

Frizzi said work began about two weeks ago and includes cleaning of all the joints, a light pressure wash, refacing some of the stone, and tuck-pointing or re-mortaring all of the joints on 20 arches.

“The bridge will be 150 years old in June of 2021, and it is our plan to have a celebration at that time,” he said. “We’re not sure we’ll be totally completed by then, but this bridge will be done before the end of this year.”

Frizzi said the society has further ambitions and a vision of what the viaduct site will mean to the future of Bellaire. The association owns close to 6 acres in the village.

“The development plans are to have a plaza here, under the viaduct. Our future plans will be to develop the second and third segments of the property north of the viaduct,” he said.

In addition, members plan to construct a bicycle trail that will run from 26th Street to the viaduct and continue on top of the viaduct. Riders would be able to continue to a point with an observation deck and turnaround.

Frizzi commended the donors who made this progress possible. He said the organizations are commemorated in the arches themselves.

“We took different arches and created a theme,” he said.

He pointed out the Business Arch, dedicated to businesses that have donated, then the Alumni Arch, the Veterans Arch, Coal Miner Arch, Railroad Arch, Italian-American Arch, Friends of the Viaduct Arch, and the In Memory Arch.

“If it were not for the folks whose names, classes and families are listed on this keystone and ringstone club, we would not have been able to undertake the work that we’re doing today, so we want to say a great big ‘thank you’ to all those who have contributed, and we also want to encourage others who have not yet joined the keystone and ringstone club to do so, so that we can continue to get the matching funds that we need to be able to do other parts of this project,” Frizzi said. “We’ve raised approximately $85,000.”

With the assistance of Ohio Rep. Jack Cera, D-Bellaire, and Ohio Sen. Frank Hoagland, R-Mingo Junction, the society was able to acquire a $100,000 grant. “We’ve used $50,000 of our money that these contributors helped us to raise to be able to hire Angelina Stone to do this work.”

“We’ve been able to use this money along with donations from others to leverage state funds. We’re in the process of receiving a $2 million grant from the state of Ohio that will help us to build the bike trail and the walkway that will go on top of that bridge,” Ed Mowrer, another trustee, said. “You’ll be seeing that in the following year under construction.”

Mowrer said they also plan to further develop the northern 4 acres into a park.

“Although we don’t have funding for that, that’s what we’re working on now — to raise funds to get that area ready to be developed,” he said.

Mowrer said the park would run to 26th Street.

“So people can ride bicycles, walk, have picnics and a whole variety of other activities once this is completed,” he noted.

John Emery, vice president of Angelina Stone and Marble, pointed out some historic discoveries made during the work.

“We found the markings where the original masons actually left their marks on the stones when they carved them, to let people know who they were,” Emery said.

Emery added that he was impressed that the arches have maintained their structural integrity. He pointed out the quality of their construction.

“The condition is very good on this bridge,” he said. “We’re not going to clean the carbon off because that is actually protecting the stone itself, and it’s part of the natural history of the arch. The stone arches support themselves, and these large stones have been sitting here since the early 1800s. The trains went across them, so they’re not going to move anywhere, but water is the worst enemy of natural sandstone. It’ll deteriorate sandstone if you don’t keep it out.”