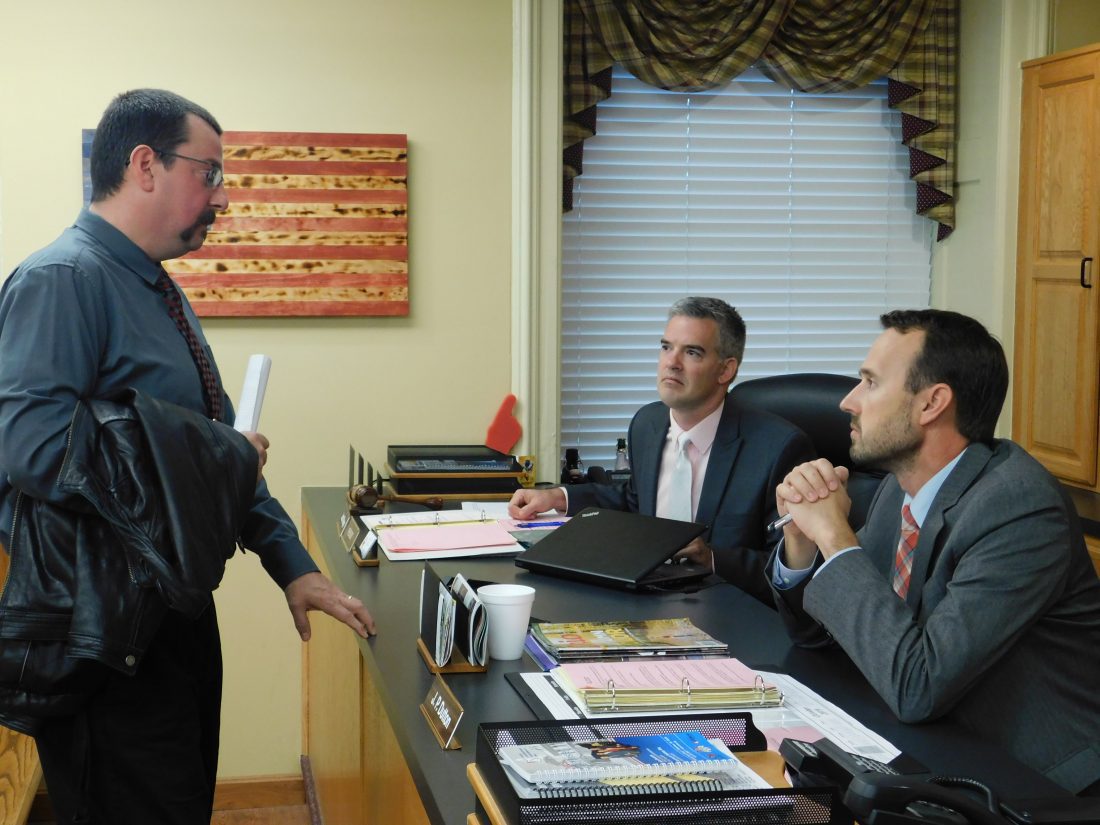 ST. CLAIRSVILLE — Belmont County’s 911 department will be improved in the coming months, according to Director Bryan Minder.

He spoke Wednesday before the Belmont County Board of Commissioners with Josh Meyer, J.P. Dutton and Jerry Echemann all in attendance.

“We’re doing a $2.2 million upgrade project, and that project’s going to complete four different tasks that we’re looking at,” he said.

The goals are to upgrade the system software and hardware and to add a server to interact with the radio system to allow for better mapping, as well as the addition of two talking frequencies. He emphasized the importance of the radio system.

“It’s the lifeline for the first responders, fire police and EMS who are out there,” he said. “If they need assistance, if they need additional help, if something goes wrong, they can talk to us. Adding the two frequencies gives us a better, expanded system. … Currently we have four channels that they can talk on, four frequencies. If four people in the county are talking at the same time, nobody else can talk on our system.”

Minder said the limitation has not exacerbated any past emergencies.

“We’re just trying to make upgrades and enhancements to (the system),” he said, noting the upgrades will include a GPS function “When someone keys up their radio to talk, we’re going to be able to see where they are on a map.”

Minder thanked the residents of Belmont County for renewing the department’s five-year, 1-mill levy in 2016, which allowed for the upgrades.

“When we renewed it, we had a list of items that we wanted to get done,” he said, adding that these included upgrades to the paging system for fire departments, which have since been completed.

He said the new round of upgrades will start next month.

“Starting at our building, working on the hardware and software part of it. Once they have that in place, then they’re going to go out and start upgrading all of our towers in the county. They’re hoping to have it all completed by April or May of next year,” Minder said.

He said Motorola is doing the work.

He said because it is an upgrade to the existing system it was not necessary to bid out the project. Minder said his department currently sees about 4,000 to 5,000 911 calls per month.

“They’re probably up about 6 or 7 percent over last year,” he said, adding that there has not been an increase in any particular or high-level emergency calls. “Over the last 22 years I’ve worked there, they’ve increased every year.”

“This is a prime example where tax levies comes through and does things for the constituents of your area,” he said. “I know you get a lot of flack over levies. … You took that levy and you made something with it.”