America gets new citizens in Wheeling 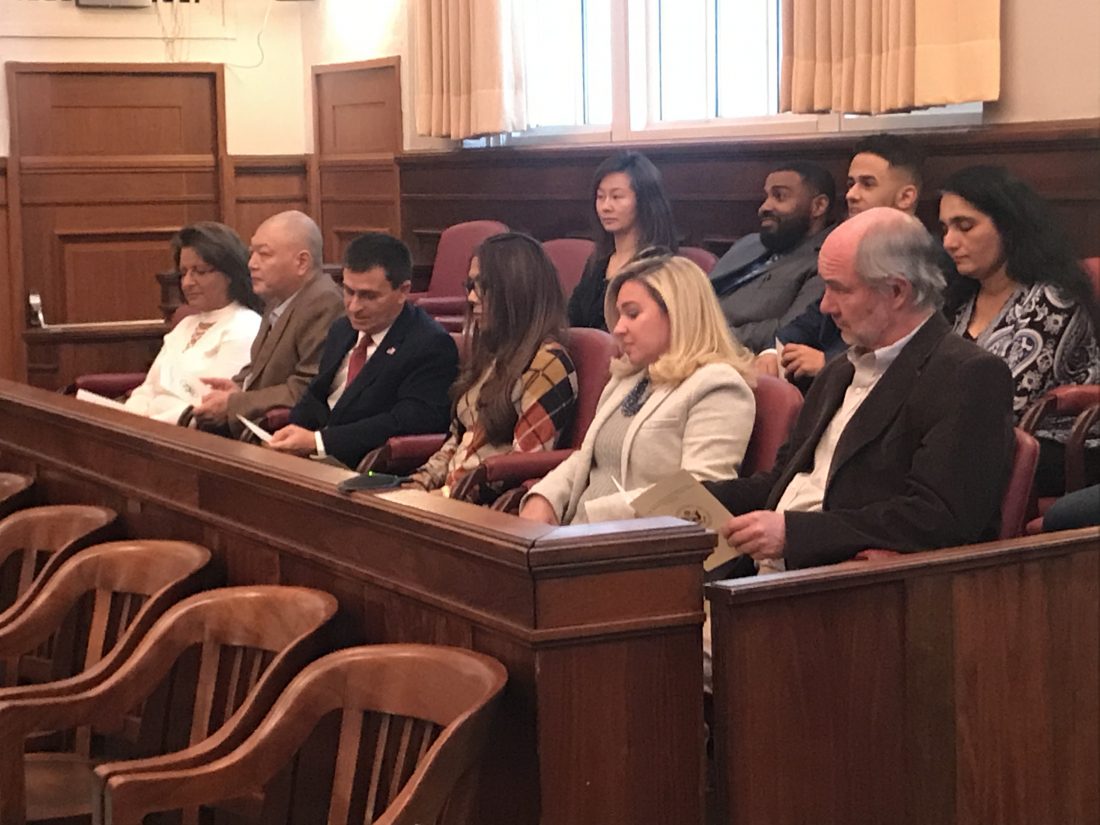 Photo by Joselyn King Prospective American citizens await their swearing in Friday in Wheeling. Pictured from left, front row, are Imane Brown of Morroco, Yalin Han of China,David Escobar of Columbia, Thanachakorn Boehm of Thailand, Iven Rocha Bolyard of Brazil, and Alan Howlett of the United Kingdom. In the back row are Yin Chong of China, Gregory Everton Mundy of Jamaica, Abdulrab Fateh Ali Saleh Alhawshabi of Yemen, and Priya Sankar of India

WHEELING — New American citizens were praised for coming to America and “doing it the right way” during a naturalization ceremony Friday in Wheeling.

Eleven people were sworn-in as American citizens during the proceedings, which took place before Judge Frederick S. Stamp of the U.S. District Court for the Northern District of West Virginia.

The new citizens came from countries in all parts of the world. Among those sworn in were Abdulrab Fateh Ali Saleh Alhawshabi of Yemen, Thanachakorn Boehm of Thailand, Iven Rocha Bolyard of Brazil, Imane Brown of Morroco, Yin Chong of China, Yalin Han of China, David Escobar of Columbia, Alan Howlett of the United Kingdom, Gregory Everton Mundy of Jamaica, Chanel Pham of Vietnam and Priya Sankar of India.

U.S. Rep. David B. McKinley, R-W.Va., had been scheduled to be the featured speaker at the ceremony. Stamp explained McKinley instead had been asked by House Speaker Nancy Pelosi to stay in Washington Friday for a possible vote following impeachment proceedings against President Donald Trump. McKinley did send a video message.

“I commend you for not only choosing to come to America, but for doing it the right way,” McKinley told the new citizens. “This is a significant day you will remember.

“All of you have a unique history. Share stories about how you got here, and what you can contribute. Thank you for your persistence and patience in becoming an American Citizen. You went about it the right way.”

Stamp encouraged the new citizens to become involved in their new country, to vote and become engaged in happenings within their communities.

He told them not to be afraid to express their opinions peacefully if they find they are being treated unjustly under the law.

Stamp also said they should embrace their new country, while continuing to recall and celebrate the traditions of their old country.

“Immigration is one of the biggest topics we have today,” Stamp said. “But all of us — except for Native Americans — must not forget we have an immigrant in our family’s history.

“Our lives are made more interesting because of immigrants.”

In taking the oath of citizenship, the new citizens renounced allegiance to and citizenship of their home country.