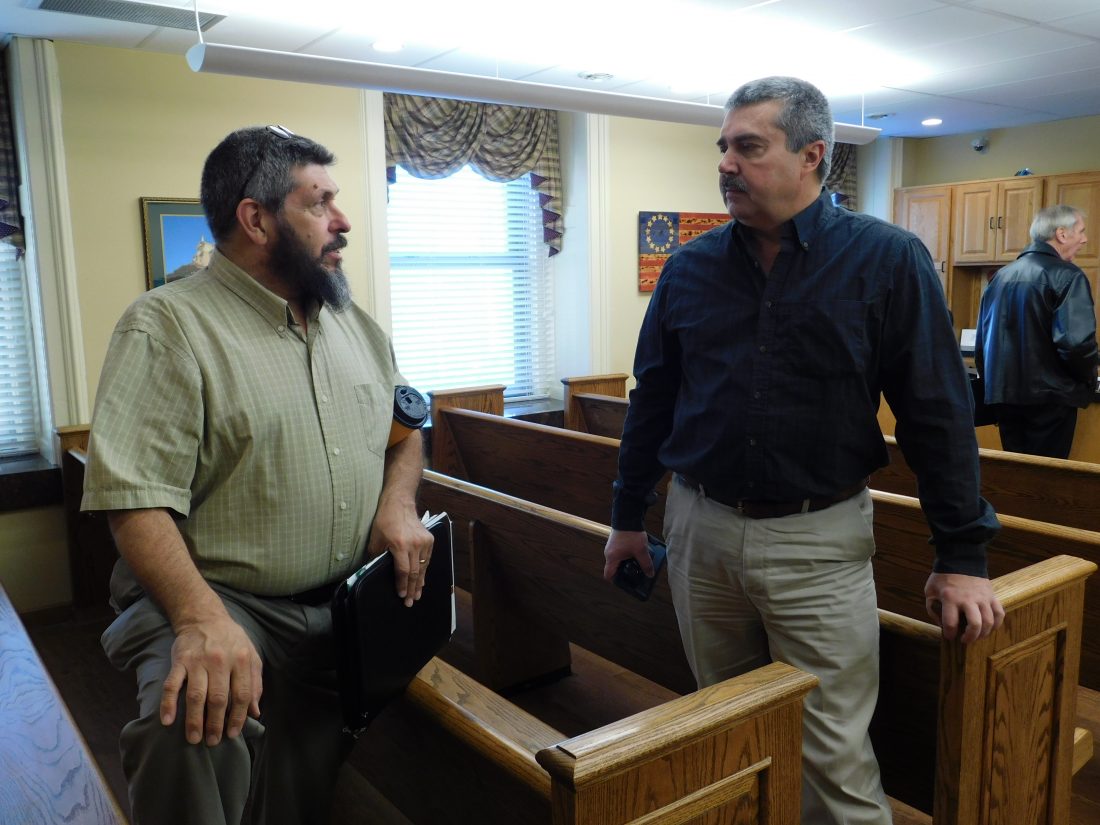 ST. CLAIRSVILLE — Belmont County Commissioners J.P. Dutton and Jerry Echemann heard feedback after the board of elections put their new location to use for the first time Tuesday on Election Day.

Earlier this year, the board of elections and the Belmont County Title Office both moved to a building formerly owned by The Health Plan. The county purchased two buildings along U.S. 40 to centralize county offices.

“The Board of Elections office is very nice, very professional,” Richard Hord of Martins Ferry said. “I think it’s in a better location that it was before. It’s a positive for Belmont County. I’m very impressed.”

“I didn’t hear of any snags,” Echemann said. “The poll workers knew what they were doing.”

Commissioner Josh Meyer was away on vacation.

Dutton said a significant project in 2020 will be centralizing the county court and prosecutor’s offices in the upper building. The commissioners concentrated on the lower building this year since it was a comparatively simpler project and some of the previous offices were in rented space. A new location for the courts is demanding in terms of security requirements and other issues.

“It ought to be going out to bid fairly soon,” Echemann said.

Hord also suggested the Belmont County Sheriff’s Residence Museum might expand to mention other individuals who had benefited the county. In answer to other questions, Echemann said the museum will be open Nov. 24 after the Belmont Savings Bank Christmas Parade and tree lighting ceremony in St. Clairsville.

In other matters, the commissioners continue efforts to establish a budget for next year, having held budget hearings will all department heads.

“We’re actively working on it right now. We obviously want to have it wrapped up by the end of the holiday season. We’re really in the phase now of digging through the numbers and assignment some different versions of how we think the budget will lay out,” Dutton said.

In prior years, the commissioners found it necessary to cut five percent of funding from all other departments to provide the sheriff’s office more to work with. Dutton said this may be the case again with the coming year’s budget.

“There are some areas, particularly in the justice system … where we’re seeing cost increase. If you try to address some of those increases, that would have to mean … you may see a decrease somewhere else,” Dutton said. “It’s still early.”

There are no updates about talks with the sheriff about options such as an expanded or additional facility. While the jail continues to house inmates out of the county at a cost, the numbers have not significantly spiked.

“We’re filled-up, but it doesn’t seem there’s a trend toward getting worse,” Echemann said.

Also, Belmont County Engineer Terry Lively will submit an application for a United States Department of Agriculture loan of $100,000 for use in obtaining equipment and repairing county roads. Lively said he does not know when he will learn if his department was approved.

“We’re just starting the application. We’re hopeful,” he said. “We’ve got plenty of equipment needs. Our dump trucks that we use for everything including winter snow plowing, some of them are 25 years old and 200,000 miles or more.”

Lively said fall inspection of trucks and equipment is complete in preparation for winter weather.

“As far as the roads themselves, we did quite a bit of asphalt patching this summer to try to get ahead of some of the potholes that always develop during the winter,” he said.

“The road will be closed to all traffic during that time. There’s just no way to maintain traffic around that site,” he said. The project could take about two months to complete.

“The townships are geared up and ready to go. They’re getting their equipment put together, putting their plows on and their spreaders. They’re knowledgeable and they do a great job every year,” he said, adding he expects no shortages in material this winter. “Looks like everything’s going well in terms of salt and cinders. … It looks like they’re getting what they need this year.

“We got a lot of seasoned workers and seasoned trustees.”