Festival of Lights underway at Oglebay 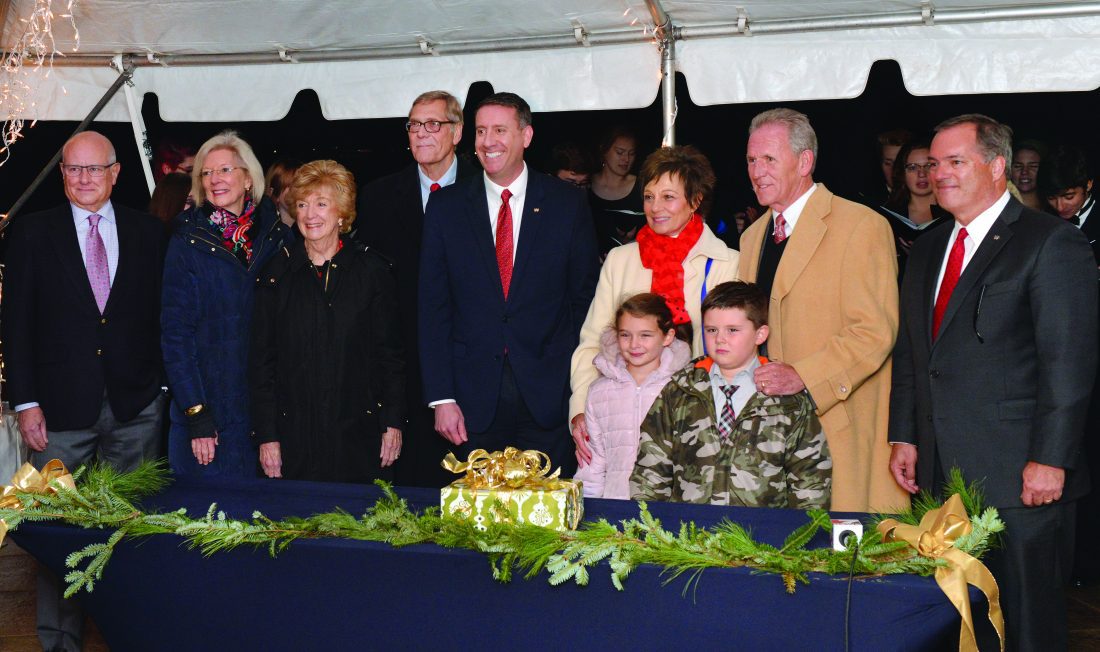 WHEELING — Oglebay Park is once again aglow with lights and entertainment this holiday season.

The annual “Winter Festival of Lights” at the park kicked off Thursday night with a light-up ceremony at Wilson Lodge, with members of the Wheeling Park High School “Young Patriots” choir singing carols to welcome about 200 people in attendance.

The weather was chilly and damp, but those present went outside and stood next to fires overlooking Schenk Lake to witness the warmth of the Christmas lights.

Invited to flip the switch this year were were representatives of WesBanco, the presenting sponsor of the Winter Festival of Lights. They included Bernie Twigg, director of community affairs; Jeremy West, vice president; and Todd Clossin, president and CEO.

Eriks Janelsins, president and CEO of the Oglebay Foundation, said the lakeside wing expansion likely wouldn’t have happened without the help of Twigg — who lobbied for the project while serving as a member of the West Virginia Grants Commission.

“If Jeremy isn’t working at WesBanco, he’s at the Good Zoo,” he said.

The Winter Festival of Lights has been a part of family traditions since 1985, according to Janelsins.

“People ask me all the time while Oglebay has been successful when other light shows have come and gone,” he said. “I think it has to do with the genesis of the event.”

He credited the efforts of the late Wheeling businessman J. Ross Felton and Oglebay Foundation chairman G. Randolph “Randy” Worls for establishing a solid foundation for the event.

“They wanted to create a real community celebration– a unique experience to draw people from all over the world in to the Wheeling community in November and December,” Janelsins said. “They worked with (Wheeling Park High School), and local businesses to drive people into the downtown, the Capitol Theatre and into Oglebay Park. Because of that, we get to enjoy this event today.”

The Winter Festival of Lights generates about $15 million for the local economy each year, he said.

New to the show in 2019, is the “Frosted Hilltop” experience located near Oglebay’s Mansion Museum, where a number of activities suitable for all ages have been scheduled.

The “Snowflake Express Train Ride” is located inside the Oglebay greenhouse, as is the “Frosty Wagon Ride,” which takes guests on a 20-minute tour through the twinkling hillsides around Schenk Lake.

While at the Frosted Hilltop, guests can warm up at the Garden Bistro’s new Ice Lounge featuring fire pits, s’mores kits and refreshments.

The Winter Festival of Lights continues through Jan. 5.