Winter lecture series moving to May 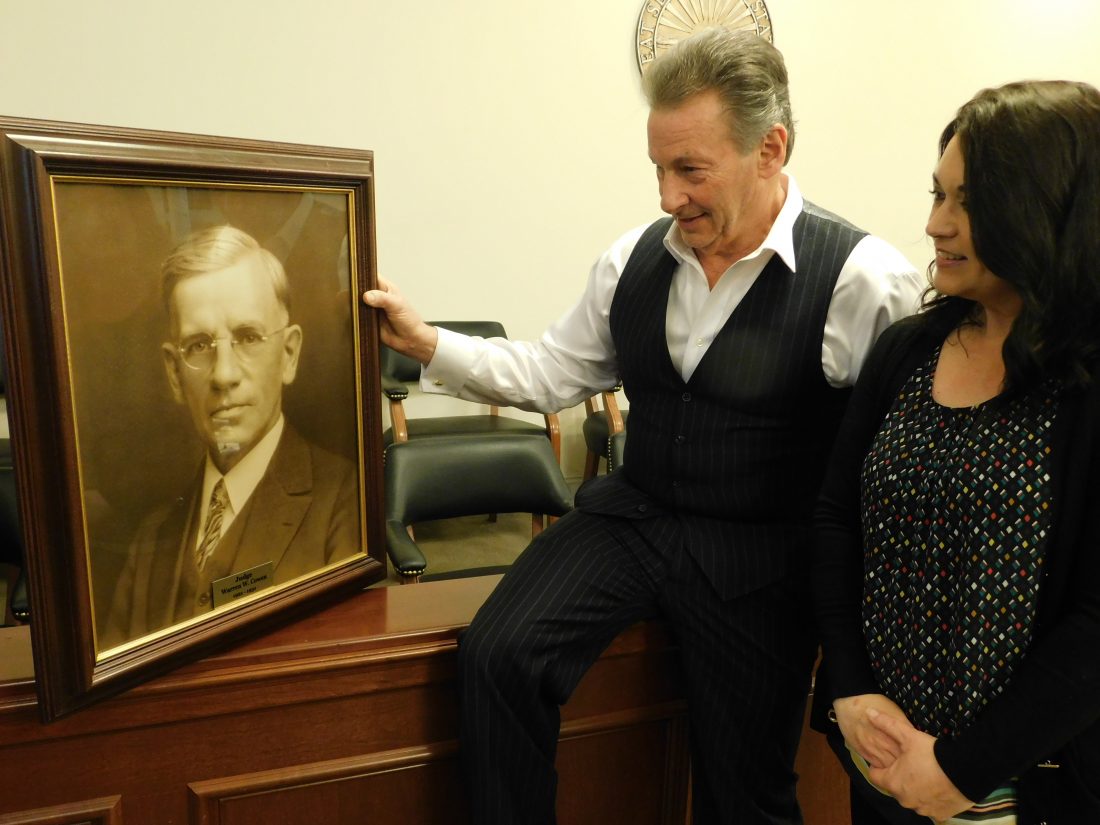 Belmont County Common Pleas Judge Frank Fregiato and Winter Lecture Series Coordinator Erica Keller, member of the Great Stone Viaduct Society, with a portrait of Judge W.W. Cowan, who presided in a Prohibition-era murder case of a Belmont County sheriff. Fregiato’s presentation and the other forthcoming two will be rescheduled in May.

BELLAIRE — Like many anticipated events, the Great Stone Viaduct Historical Education Society’s Winter Lecture Series has been postponed due to the coronavirus pandemic, with the remaining three lectures to be rescheduled in May.

The presentations are free of charge and held at the Bellaire Public Library, located at 330 32nd St. For the next lecture, Belmont County Common Pleas Judge Frank Fregiato will present a case of murder from the days of Prohibition that claimed the life of a Belmont County sheriff.

“We are recognizing … the 100-year anniversary of Prohibition, which started in 1920,” Fregiato said. “Belmont County Sheriff Sam Dunfee was shot and killed in 1926 pursuing some rum-runners. Mike Dragovich was charged with two counts of murder regarding the matter. There was an eyewitness who testified at trial to the murder. However, there was a not guilty verdict.”

Dragovich, 32, was a rum runner originally from Austria. The shooting occurred Aug. 5 in Provident, originally north of St. Clairsville, now part of the city, where Dunfee was trying to make an arrest. Dunfee is laid to rest in a cemetery near the St. Clairsville City Building. Fregiato said the eye witness was a deputy sheriff.

The presentation will focus on the trial and explanation of the verdict of innocent.

“He was shot and killed. The question is who did it, and we’ve got several options that we’re going to explore at the presentation,” Fregiato said. “There’s several theories as to … who’s bullet. The bullet came out of which gun.”

Fregiato said many unanswered questions about the case remain.

“The theory that was going on was that one of the (rum) runners shot him, which is why they held Mike Dragovich for the murder,” Fregiato said.

The trial was six or seven days, but the jury deliberated for only 25 minutes before returning a verdict. Fregiato said his research was complicated by the inability to easily look up newspaper articles from the time.

“Certain odd things did appear in the research,” Fregiato said. “A fire occurred at the press where all the newspapers were located, and a lot of the newspapers got burned. It was odd, my saying that, because there were two separate newspaper companies, both of whom got burned.”

In addition, one of the witnesses supposedly broke a bone during the course of the trial and was unable to testify.

“Another thing that happened, two strange individuals from out of town showed up at one of the local restaurants,” Fregiato said. “They appeared very briefly and they disappeared also.”

Fregiato said he had less information to draw from in this case from the 1920s than he did during an earlier presentation he had made of a case from the 1860s.

“Simply because of the fires,” Fregiato said, adding both newspapers were burned during the time of the trial. “We had to go to Martins Ferry library to dig up some of the newspaper articles.”

He said the clerk of courts office also provided documents that will prove valuable and interesting during the presentation.

“The murder technically has never been solved, because Dragovich was found not guilty, and there was never, ever a guilty verdict found of anyone. So the question becomes: Did Dragovich kill him and the jury was wrong? Did one of his own men accidentally shoot him? Or, more interesting, did one of his own men actually intentionally shoot the sheriff? That mystery is going to go on forever.”