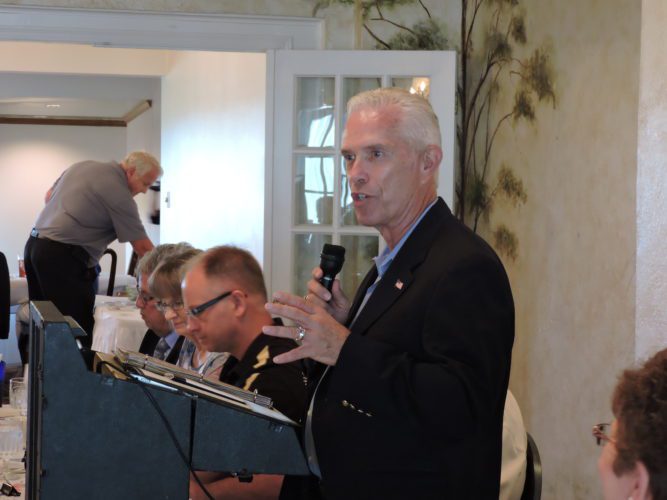 Johnson was introduced as a man who was raised on family farms. He entered the U.S. Air Force in 1973 and retired as a lieutenant colonel with distinguished service of more than 26 years. After retirement from service, he turned to creating high tech businesses and served as chief information officer for a global manufacturing company. In 2010 he was elected to his first term as representative of Ohio’s 6th Congressional District; he was re-elected in 2012 and in 2014. He serves on the House Energy and Commerce Committee and the House Budget Committee. He is also a member of the House Shale Caucus.

Johnson said he agrees that long-term funding for transportation infrastructure is good because it helps businesses with construction planning, but he said he still has some “very serious concern” over how the Highway Trust Fund will be funded long-term.

“The Highway Trust Fund historically has been supported through the gas tax. With more fuel-efficient cars, with a third of our citizenry no longer looking for work and falling out of the labor/production pool, we have fewer people on the highways. So there’s not enough gas tax money being collected to pay for the Highway Trust Fund,” said Johnson.

Johnson said he supports alternate ways to fund highways “like public/private partnerships, where companies invest in a particular series of government bonds. For every dollar that they contribute they get to bring back so much money from overseas and repatriated money.”

“We have trillions of dollars sitting overseas with businesses putting it over there to shelter it from the 35-percent corporate tax rates that we have here in America, so there are some opportunities there,” he continued. “And also, possibly opening up places like ANWR (Arctic National Wildlife Refuge) to energy development and creating a long-term stream of revenue so that we can fund the Highway Trust Fund with it.”

He has also sponsored new legislation that is designed to keep energy money in Ohio instead of it going to federal coffers.

“The Power Counties Act of 2016, that’s HR3357, I would affectionately call this the Haliburton Act. It was the brainchild of Dan Haliburton from my staff. He travels this vast district both with me when I am in Ohio, and without me when I’m working on your behalf in Washington, D.C.  He gets out and about to many of our most rural Appalachian counties, particularly those that have the Wayne National Forest. Right now the way our federal government works, when they do energy development  on public lands like Wayne, all the revenue generated from that activity goes to the federal government. None of it stays in the counties or the local areas where the public lands reside. I don’t think that’s fair. I think because it degenerates the tax base, makes it very very difficult for those counties to pay for education and infrastructure programs,” he said.

Johnson said the Power Counties Act would leave 20 percent of those revenues in the county of origin to be used for education and infrastructure.

“I think that would be a big shot in the arm to some of our local counties,” he said.

Johnson also addressed the opioid addiction crisis that affects our region and lauded the Comprehensive Addiction and Recovery Act of 2106, sponsored by U.S. Sen. Rob Portman, R-Ohio, which was recently signed into law by President Obama.

“Everybody recognizes that addiction is no discriminator. It does not discriminate on race, ethnic background, economic status, political party. Addiction affects everyone that’s close by. Families are ripped apart, lives are destroyed,” he said. “CARA is the first federal law to support long-term recovery. The bill encompasses a comprehensive response to the opioid epidemic, including prevention, treatment, recovery support, criminal justice reform, overdose reversal and law enforcement elements.”

He emphasized that laws in Washington, D.C., cannot solve the problem alone, and that communities, families, churches and local officials must come together to stop the problem. He mentioned that in Portugal, addiction and drug use has been de-criminalized, and most of the money that would have gone to prosecute and incarcerate drug users has been spent instead on treatment. As a result, he reported, drug addiction there has seen a 50 percent decline over a 10-year period.

Ohio Rep. Andy Thompson, R-Marietta, also gave remarks at the meeting and said he is working on economic development for the region in partnerships with groups like OMEGA.

“We are trying to re-brand this part of the state as the ‘Shale Crescent USA,'” said Thompson. “We are working to get Belmont County and perhaps some of the other counties down south involved in this. It is a great way to showcase our area.”

Belmont County Commissioner Ginny Favede, a Democrat who is seeking to unseat Thompson in the November general election, was also on hand.

“As a member of the Omega Executive Board of Directors I was pleased to host the Summer Mixer here in Belmont County,” Favede stated. “Omega serves the citizens of 10 counties and is always well attended. I was particularly pleased to hear Congressman Bill Johnson address opiate addiction and the heroin epidemic. I have been working with Congressman Johnson, Senator Portman and Senator (Sherrod) Brown’s offices for the last two years to have Belmont County designated as a High Intensity Drug Traffic Area. The struggles of this situation are heartbreaking and clearly need addressed at the state and federal level. The heroin epidemic is a new phase of the war on drugs. It is costly to families and those afflicted by addiction as well as law enforcement and local governments. I am hopeful that our area will see funding made available to our Multi Crimes Task Unit Drug Task Force as well as funding for incarcerated treatment facilities separate from our jails. This is ripping our communities apart and needs addressed from every level possible.”

ST. CLAIRSVILLE -- Area hospitals are seeing a surge of COVID-19 patients comparable to the height of the pandemic ...

Another example that political hysteria has grave consequences

Get the shot, help economy

Wheeling Park drops to 1-3 after loss to University