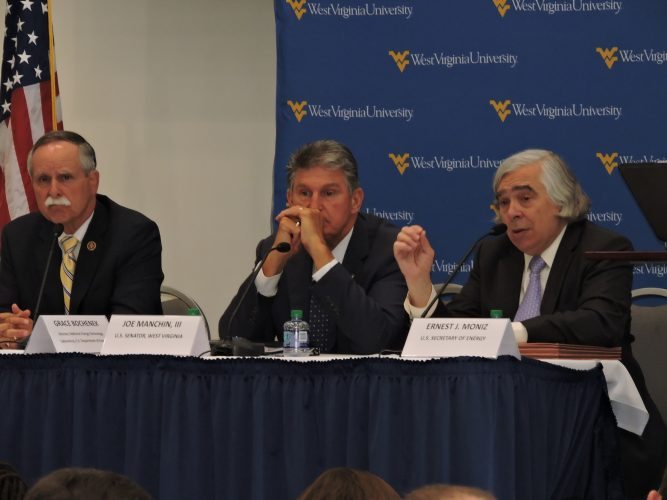 MORGANTOWN, W.Va. — About 80 percent of America’s coal-fired electricity generation takes place in units that are at least 30 years old, so officials believe the only way coal will remain a viable source of power is through innovative technologies to comply with environmental standards.

As a cabinet member, Moniz reports directly to President Barack Obama. He said the notion his boss wants to eliminate fossil fuels has been exaggerated.

“We are heading toward a lower-carbon energy system,” Moniz said in reference to the Clean Power Plan, which requires power plant operators to curb carbon dioxide emissions 32 percent by 2030, compared to 2005 levels. “That does not mean not using fossil fuels.”

Before departing WVU for a tour of the coal-fired Longview Power plant, which was closed to media, Moniz, Manchin and McKinley seemed to agree coal would continue to be part of the nation’s energy mix, but said those burning it will need to find a way to comply with new regulations. Although the Clean Power Plan is officially on hold until legal challenges make their way through the court system, many electricity producers are already shifting to natural gas generation in anticipation the plan will eventually be declared legal.

“We have to learn how to burn them cleanly,” McKinley said of coal and natural gas.

“Coal is an abundant, affordable and reliable energy source. Right now, American ingenuity should be harnessed – not restrained – to advance clean coal technology in order to protect our future at home and around the globe,” Manchin said after the discussion.

Prior to Moniz, Manchin and McKinley taking the stage, Steven Winberg, program manager for the Battelle Memorial Institute, said the age of coal-fired power plants is the major problem facing the industry. Because many of these plants are going to be retired, new pollution control technology will need to be installed on their replacement units.

This fact did not discourage McKinley, however, as he said those plants can be retrofitted.

“Investing in clean coal technology will create new jobs, keep us competitive on the world stage, and advance America on the path to energy independence,” McKinley added.

Moniz said one way to help keep coal in the mix is to encourage development of power plants that employ carbon capture and storage, more commonly referred to as CCS. This technique involves “scrubbing” the carbon dioxide away from power plant emissions and diverting it to an underground storage area.

“These CCS plants are not going to be operating for 10 years. Utilities always make their planning on decade horizons,” Moniz said, while calling on Congress to pass billions of dollars in tax credits to help burn coal more cleanly. “I think CCS tax credits are what the investment community needs.”

Another idea proposed by Winberg would be for coal operators to establish power plants on their own property. That way, a large coal company would not be at the mercy of an electricity firm that decides to switch to to natural gas.

“The coal industry must build, own and operate these new plants. … Clearly, we see the natural gas revolution continuing,” he said.

ST. CLAIRSVILLE — Senior Suites at St. Clair Commons and Interim Healthcare of Southeast Ohio have teamed up to ...

ST. CLAIRSVILLE — The city is in a precarious position regarding water service, with Safety and Service Director ...

WOODSFIELD — The Monroe County Health Department has reported that the delta variant has made its way into the ...

ST. CLAIRSVILLE — The delta variant of COVID-19 is spreading through the area and Belmont County has been ...

WHEELING — A positive COVID-19 diagnosis among staff at Good Shepherd Nursing Home has caused the facility to ...

Browns LB Walker out with knee injury, Owusu-Koramoah back