Hupp Resigns from Switzerland of Ohio Board of Education 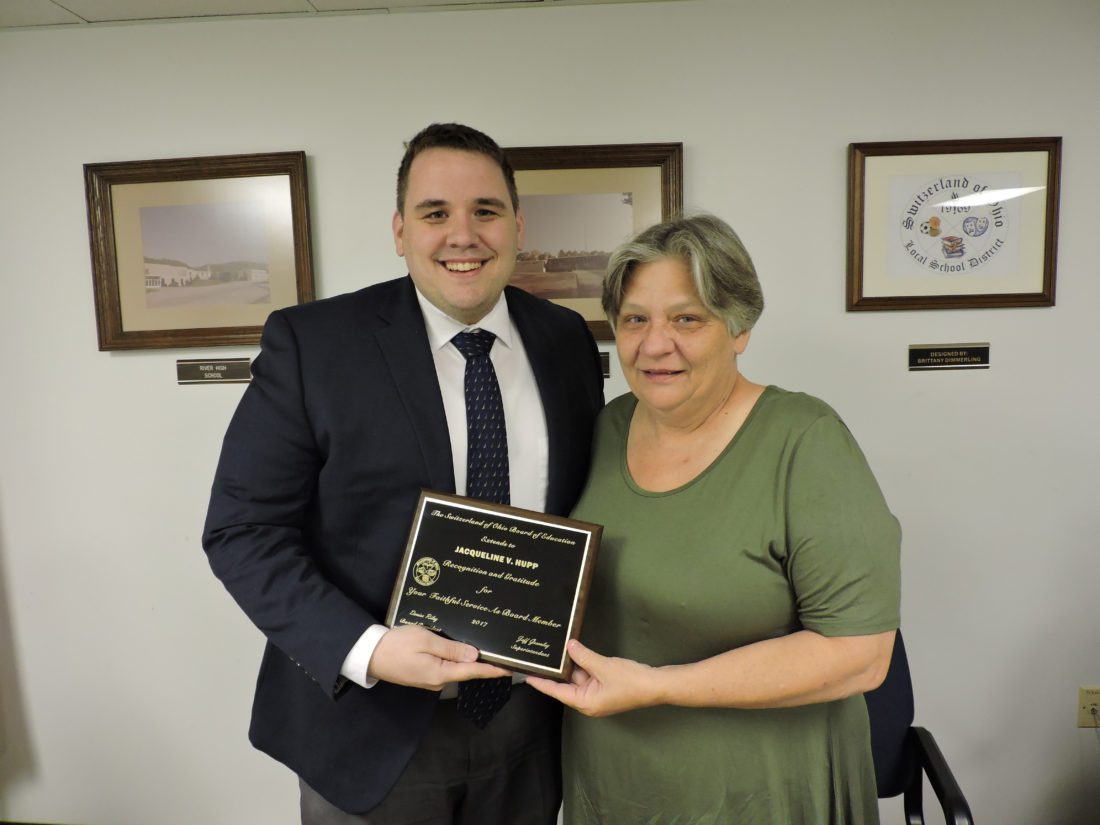 WOODSFIELD — The Switzerland of Ohio Local Board of Education accepted the resignation of member Jackie Hupp Tuesday.

âI would like to recognize all your years of service and all the hard work you have put in,ã Riley said.

âHealth and personal issues have taken their toll, so I have decided to step down and take care of me,ã Hupp said.

Greenley took time to praise the new district leadership team of about 30 Switzerland of Ohio educators for attending a workshop with leadership from the Hamilton Local School District near Columbus, which is similar in size, both in terms of enrollment and budget. The Hamilton district has raised its state academic ranking from fourth-lowest in the Central Ohio region to fourth-highest.

âThey shared with us about their journey and what they have learned. As we look as a team at our curriculum realignment, they were very helpful with our team as we try to better serve our studentsá needs,ã Greenley said.

Greenley then shared with the board some emails that teachers sent to their colleagues about the workshop that demonstrated their enthusiasm about what they had learned.

âOur teacher leaders were really inspired,ã Greenley said. âWe talk about empowering our kids, but I think it is equally important to empower our staff. As they become leaders and lead their teams, I think we will see some gains as that communication increases.ã

Special Education Coordinator Larry Koslik said his department is hiring a board-certified behavioral consultant, as well as a second certified school psychologist for the district. He said the district is looking to hire two new registered nurses, as well.

Transportation Director Jason Clutter said Skyvue Elementary School has an âoverpopulation issue,ã and brought up possible plans to build a four-classroom addition on the south end of the building.

âI think itás great that our district is growing. This is good news,ã Riley said.

Curriculum Director Zac Housley talked about the new course catalog, and curriculum realignment. He said that he and Chief Academic Officer Jennifer Bohach have been listening to input from teachers, and are focusing on giving students more specific courses instead of broad-based courses.

âWe are giving students more choice without overhauling the whole system,ã Housley said. âIf I teach English 11 very broadly, I donát necessarily get into it if I donát like whatás being taught. But if Iám really big into poetry and Iám teaching poetry, Iám going to put a lot more effort and energy into that — just like a student who is very into poetry and is taking a poetry class.ã

Housley said there has been a lot of progress made in the last two weeks on the curriculum realignment, and he feels teachers have more input now into what they teach.

Other donations recognized and accepted were from EdgeMarc EMEnergy Employer for Powhatan Elementary Schoolás Blessings in a Backpack program, and from Bayer Heritage Federal Credit Union in the amount of $230 for BrainPop for River Elementary School.

âI would like to sincerely thank anyone and everyone who has done something good for our kids. Those are big good deeds. Thank you very much,ã Riley said.