JobsOhio meeting open to the public

Board meeting held in Cadiz 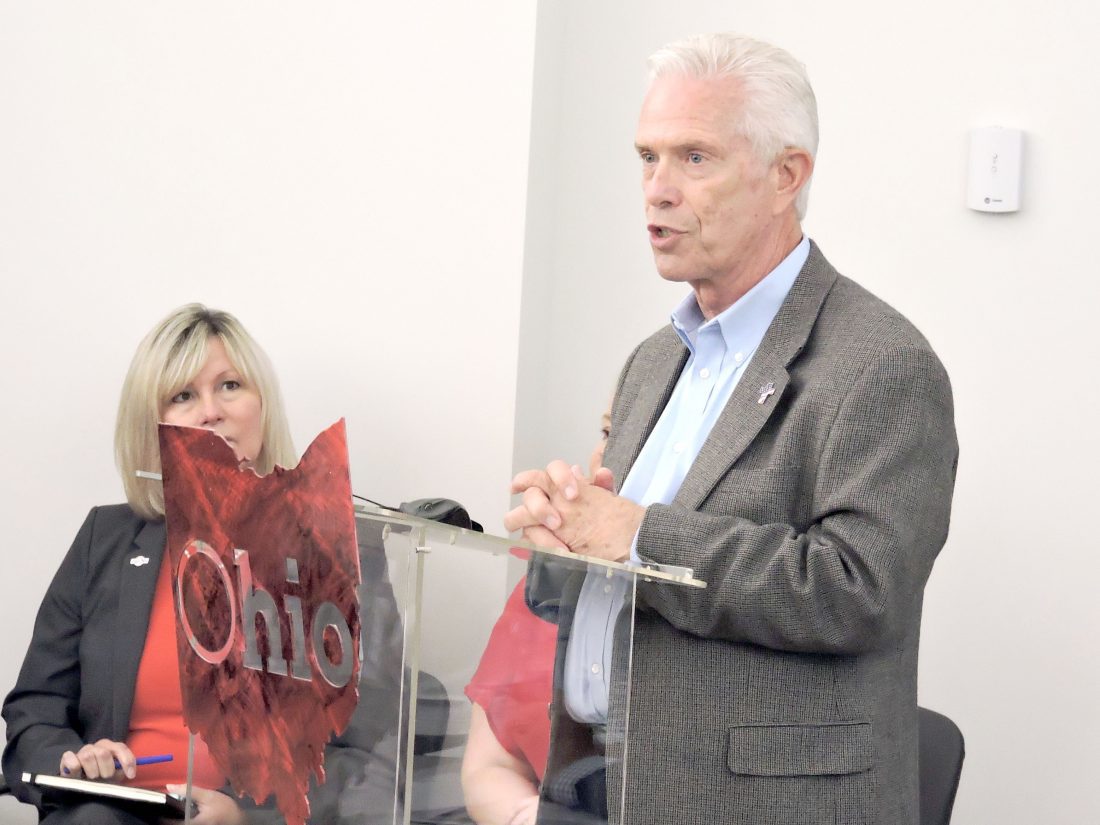 CADIZ — It was a full house at the JobsOhio’s public board meeting on Monday afternoon at the Ohio Mine Safety Training Center in Harrison County.

JobsOhio is a private nonprofit corporation designed to drive job creation and new capital investment in Ohio through business attraction and retention and expansion efforts. Numerous elected officials, department heads and seven of the nine JobsOhio board members were present at the meeting.

Bob Smith, chairman of the board, began the meeting and thanked all who were in attendance. He then introduced Congressman Bill Johnson.

Johnson, R-Ohio, discussed the actions of President Abraham Lincoln and the Civil War in reference to Ohio’s leadership skills.

“So you’ve got the secretary of treasury, the commander in chief of the Army, and the two most prolific fighter generals that Lincoln could find, all from Ohio. You think about where we might have been, as a nation, if Lincoln had not surrounded himself with that group of Ohio leadership … ,” Johnson said. “The partnership that exists between APEG and JobsOhio, I can’t think of another state that is doing it the way we’re doing it here in Ohio and it is paying big big dividends.”

Since January 2011 through this year, more than $70 billion of investment has come in to this region, he said. He added that 32 percent of the nation’s natural gas demand comes from this region and by 2050 it is estimated to be as much as 50 percent.

“There is such a wealth of resources right here in our region. … I think there’s a lot of reasons to be optimistic about where we are, pride in where we’ve come from, and a lot of excitement about where we’re going,” he said.

He said proposed the PTT Global Chemical-Dealim ethane cracker plant is in the final financing phase and that the developers have invested around $70 million in pre-construction and site preparation work.

“Companies don’t put that kind of money into a no-go operation, folks. I’m telling you that we’re heading in the right direction,” he said.

Johnson also said that the plant could be the biggest petrochemical project in America.

“There’s every reason to be excited about what’s happening in our region, and it’s not for any other reason except we came together as a team. JobsOhio, APEG, our state, our governor. … We’ve done the right things, and we’re leading the way. That’s why we’re one of the leading job creating states in the Midwest,” he said.

J.P. Nauseef recently became president of JobsOhio when he was appointed in February by Gov. Mike Dewine.

He discussed his first 100 days as president. Nauseef explained that he met with all six of the regional partners in order to create a directional plan. He said he wanted to get out and listen to each regional partner and elected officials at all levels of government in Ohio.

“This Ohio mission is for the benefit of the citizens of Ohio. We want to establish, maintain constructive working relationships … It’s important to make sure we establish relationships with our people’s representatives,” Nauseef said.

Nauseef and his team came up with a “Go Forward Strategy.” He said he has created a timeline in which by September he will share the goals and feedback he has formed.

“The JobsOhio business model, as an outsider coming in, as you all know this, it’s an amazing model. It is the envy of every state in the nation. It puts us in the position because we are private, we have a funding source, to take a long hard look on strategies to be successful as a state,” Nauseef said.

Director Matt Cybulski explained how they try to integrate from a gas well that’s drilled down to a project like the potential PTTGC-Daelim plant or an existing company in Ohio.

“Energy and chemicals industry is critical to the state’s economy. We’ve always had a downstream chemical economy refinery and things of that nature. Again, shale development started about eight to nine years ago. The full value chain started to be realized,” Cybulski said.

There are around 400 people working in the energy and chemical industries in the region and 88,000 people in those industries in the state. The companies include AEP, Sherwin Williams, Goodyear and the list goes on, Cybulski said.

There are over 3,100 natural gas wells permitted in the state of Ohio, 2,200 of which are producing, he added.

“The trend continues to go up, technology continues to get better, resulting in better production, so we’re seeing natural gas and all the natural gas liquids — ethane, propane, butane — and other products and that’s what is drawing companies like Shell to build the cracker plant over in Pennsylvania and that’s what’s drawing PTT to Belmont County and other companies we’re working with,” Cybulski said.

There has been over $74 billion invested directly in Ohio since 2011, he said.

“We are still a part of the country that builds the rest of the country,” Mike Jacoby, CEO and president of APEG, said. “We’ve been that way for a long time, we still are.”