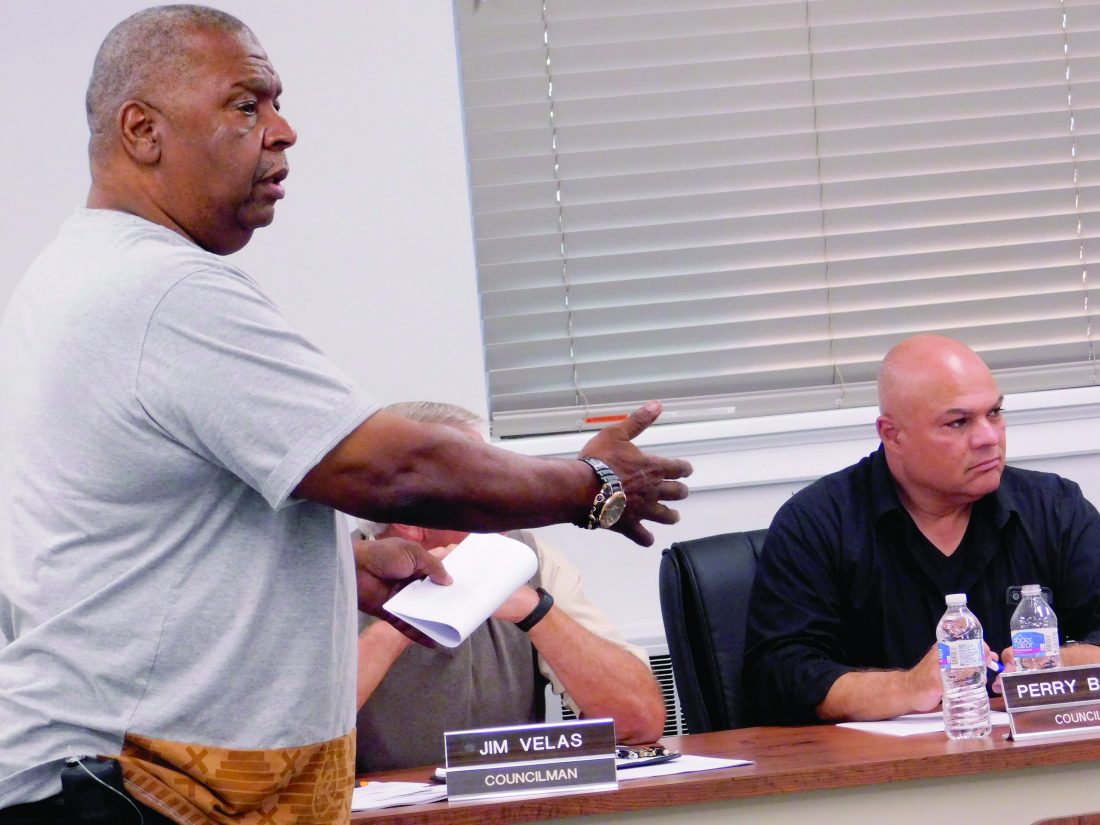 T-L Photo/ROBERT A. DEFRANK Bill Brooks, a vocal opponent of water privatization, renews his request for an independent study of the St. Clairsville water system before the debate about selling the water and wastewater system continues.

ST. CLAIRSVILLE — The future of the city’s water service remains uncertain, and unless a certified water operator is found within a few weeks, the city could be facing tens of thousands of dollars in fines each day.

Distrust between residents and city officials continues to grow, as negotiations are ongoing between the city and Aqua Ohio, the private, state-regulated entity that has expressed interest in purchasing the aging water and wastewater system,

At Monday’s city council meeting, Kathryn Thalman said she had serious concerns over the state of the water service. Thalman was a member of a since-dissolved board formed to evaluate a bid by Aqua Ohio.

The board was disbanded in June after four meetings.

Thalman said she has been in contact with the Ohio Environmental Protection Agency and was told that the city’s Class 3 water operator left for another position elsewhere in March.

Thalman heard that Safety and Service Director Jim Zucal was told the city must obtain another operator or face a fine of $25,000 per day. Zucal obtained a six-month extension, which will end Sept. 11.

Thalman asked for more information about what grants the city has applied for and what efforts the city has made to find a new Class 3 operator or to offer education and advancement to the two current Class 2 operators.

Zucal confirmed this, and said the process of becoming a Class 3 operator is a lengthy and demanding one, with no qualified operators in the area. He added that such an individual would demand a salary and benefits in excess of $100,000.

Zucal said the city water remained safe and he intended to request another six-month extension from the EPA, saying he was confident it would be granted. Zucal also said there are freelance operators available should it be necessary to obtain one.

“I will never put the city in jeopardy. The city will always be well taken care of as long as I am here. You will not see a fine,” he said, adding a Class 3 operator is deemed necessary is because St. Clairsville takes water from a surface reservoir.

Mayor Terry Pugh said they have not looked for another operator at this time due to the uncertain future of the city’s water.

“Would it be fair to go out and look for a Class 3 (operator) when we don’t have to right now, and hire him, and then if it was sold to Aqua maybe jeopardize a man’s job that moved here. There are no Class 3 (operators) in this valley that’s going to come to work here,” he said.

Pugh added that Aqua Ohio has capital and Class 3 operators.

The attorneys representing Aqua Ohio and St. Clairsville continue to negotiate the bid, with a draft not expected to be placed before council until September.

Bill Brooks, a resident who has been vocal in opposition to privatization and who has helped organize two rallies in recent months, also spoke, reiterating his demand for an independent engineer to provide a cost of making limited upgrades and likely rate increases until the city could possibly rely on the county water system, once Belmont County completes its planned water service upgrades.

Zucal retorted that the city faces both a deteriorating water plant and distribution system, and that the city must be eligible for financial aid to apply to compete for funding. He added St. Clairsville’s situation does not meet the requirements of other entities such as the U.S. Army Corps of Engineers. Zucal also said a steep increase would be necessary for the city to qualify for grants and loans, adding that minimum rate increase would have to be between 1.8 and 2.3 percent of median household income, with the Ohio Environmental Protection Agency recommending an increase of 2.5 percent of the median household income, which is $68,000.

Councilwoman Beth Oprisch, who had attended the rallies with other council members, addressed Pugh, saying he had sent her a letter expressing his disapproval she did not meet with him privately to ask questions. She said while Pugh and the administration have been very responsive, she believed a public setting was the appropriate venue.

“I just don’t see this as a behind-the-door type of thing,” she said. “I felt I needed to address it publicly. … This is a public issue, and I feel like it comes down to a fundamental, philosophical difference in government business. I feel this needs to be in the open.”

Oprisch added that her attending of a rally did not signify agreement.

“My door is open anytime to sit down and discuss. I don’t do things behind closed doors,” Pugh said, adding council members have brought their constituents’ questions to him and received answers. “This isn’t something new we’re talking about, but the fact that I heard out of councilmen’s mouths ‘We need more time, I feel like we don’t have the information.’ There’s never been a time when I haven’t been willing or (Zucal) hasn’t been willing. … I took offense that ‘we don’t have any information’ when it’s there and all you have to do is ask.”

“He’s working to get our information to the city website, to the fact page, so people could go out to our website and look at the facts,” Zucal said afterward.

He said he does not see a conflict of interest and the city law director approved.

“We’re totally transparent. … (Larue is) helping us get the word out.”