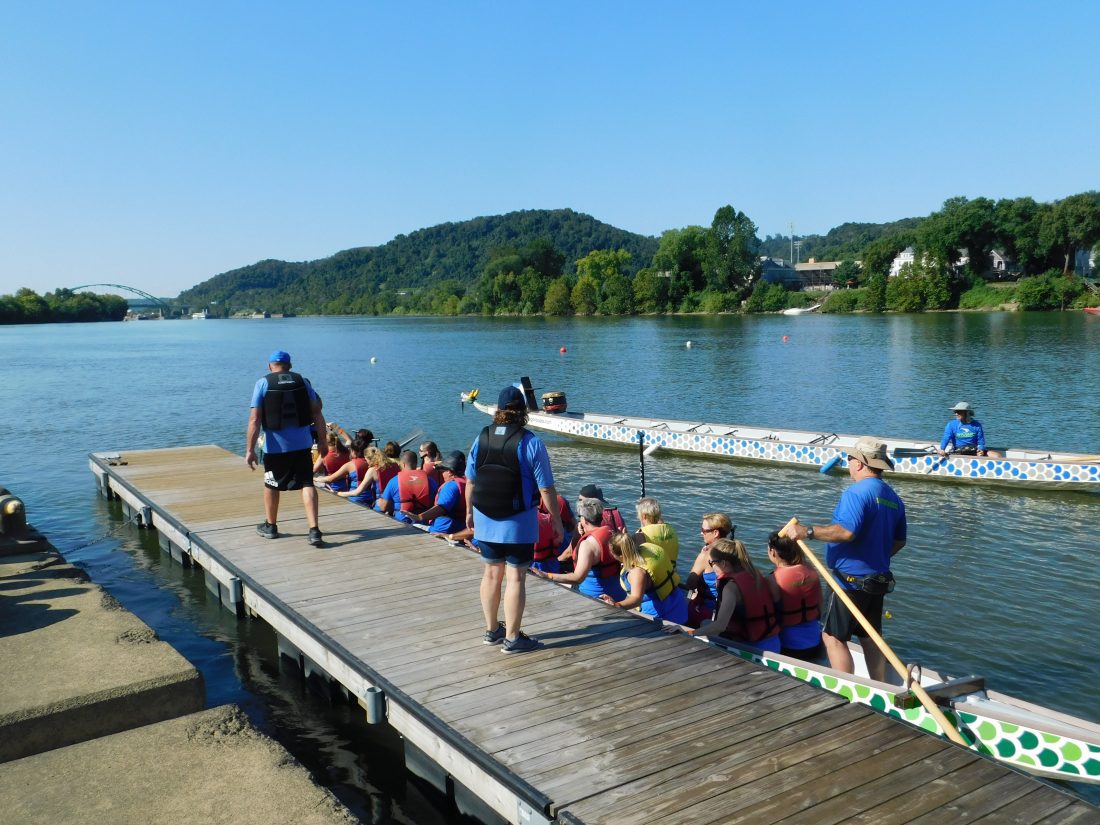 T-L Photo/ROBERT A. DEFRANK Dragon boats prepare to launch for the race along Heritage Port on Saturday for the fifth annual Dragon Boat Race to raise money for King’s Daughters Day Care.

The distinct shapes of the 46-foot-long Hong Kong-style keelboats created a unique spectacle as they set out from Wheeling Heritage Port into the middle of the river to begin their races. More than 20 people moved as one as rowers plunged their oars in the water to the rhythm of drums and sent their craft speeding along the water. The fifth annual Dragon Boat Race course covered 250 meters upriver.

“We have 21 people per boat,” Lori Kenamond, a member of the board of directors for King’s Daughters, said. “You have 20 paddlers and one drummer. … That is the key: stay in sync with your team. … I think it’s a great team sport and team-building sport. There are a lot of businesses and universities here that choose this for team building, as well as community groups and groups of friends. It’s just something to do socially. … Each boat paid an entry fee, and the proceeds go to King’s Daughters Child Care.”

She said this year’s event featured 17 teams, including local businesses and residents.

“A lot of teams from the Ohio Valley, but we also have a team from Cleveland this year,” Kenamond said. “Most of the other ones are local. … It’s a great fundraiser because it is so unique.”

Jamie Remp, executive director of King’s Daughters Child Care Center, said the goal was to hold a unique fundraiser related to the riverfront.

Remp said the Tennessee-based company Dynamic Racing provides boats and training while King’s Daughters gathers community and corporate teams and sponsors. She said about 400 people compete in the race.

“It’s a great team-building event. Corporations love it for that. … Our community is great for supporting the nonprofits in the Ohio Valley,” she said. “We probably average from this event about $15,000 to $20,000. We’ve had some matching grants for the event in the past. It brings a lot of positivity. It let’s people know who we are.”

She said King’s Daughters has been active in the Ohio Valley for more than 130 years.

“This year we just finished three more classrooms to remodel. So we have remodeled the whole center. We started this event and raising those funds to remodel our kitchen, and we did that back in 2016. Every year we’ve been able to remodel classrooms,” she said. “We have a long wait-list. We don’t have space for everybody. We have about 130 children on the wait-list. We have limited space to expand.”

“It’s a good event, a good charity fundraiser,” Matt Taylor, team member of the King’s Daughters crew, said. “I’m learning as we go. Last night we had a practice for an hour and a half or so, and today’s race day. … The river’s perfect.”

“We’re having fun, great teamwork and it’s good for the community. A great cause,” Michael Kirschten with the Mississippi Skiffs said, fresh after his team finished its race against Belmont Savings Bank. He added that his team is drawn from Anytime Fitness out of Moundsville. “I think we’re all pretty competitive. It’s for a good cause, and we’re trying to win. It takes people to be in rhythm. It takes people to be on the same page.”

Teammate Lisa Duvall said they were in the habit of cooperation.

“Since most of us are members of the gym, we’re working out together all the time, and we were a team already,” she said.

Kim McCluskey, trust officer with WesBanco, was the drummer at the prow for WesBanco’s team.

“WesBanco has always been a big supporter of the community, and King’s Daughters is a great charity for the day care they provide, so that’s the first thing. But the second thing is: this race is just fun,” he said. “We’ve all got to work together. It’s not all about brawn, it’s about working together. … We all say, ‘One, two! One, two!’ If somebody’s out of coordination it’ll throw the whole boat off.”