Rice taking the reins at EQT 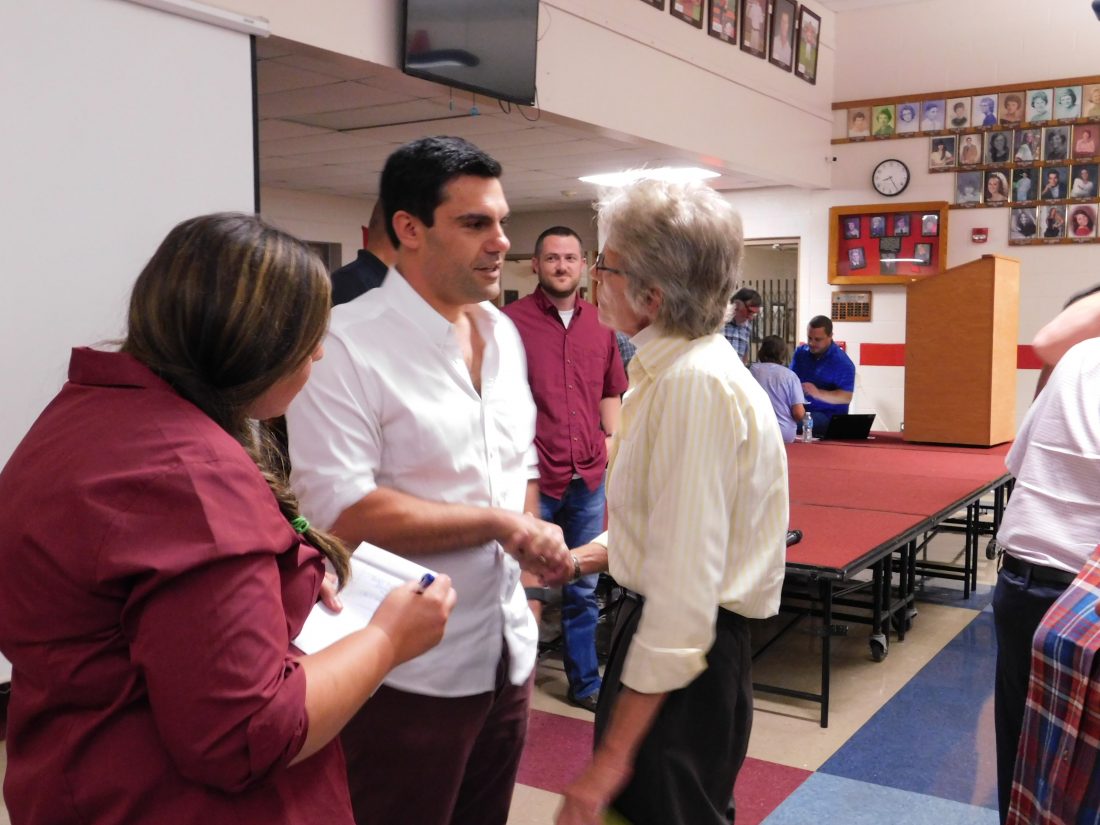 MORRISTOWN — EQT Energy is under new management, and new CEO Toby Rice talked a big game about the future of the company last week, seeking to restore the faith of the shareholders.

Rice addressed close to 200 landowners from across Belmont County and the region during a town hall meeting at the Union Local High School commons Thursday evening. He described his route to taking control of EQT in July, the company’s future goals and practices in the area, and answered questions from the landowners.

“Two years ago, we did not see this in our future, but we are happy to be back,” Rice said.

Rice said EQT would work on more solid business practices, hightening communication with landowners and producing results for the shareholders.

Numerous attendees spoke about their past problems with EQT, including disorganization and lack of response.

The attitude at the town hall was enthusiastic and welcoming of Rice’s leadership. Rice Energy was sold to EQT in 2017, and the Rice family — who founded the company in 2008 — and other shareholders were subsequently dissatisfied with EQT’s operations.

He said EQT has a responsibility to provide heating energy for customers, new profits for shareholders, and fair treatment and consideration for the properties of landowners who have signed leases with the firm. He said EQT’s third quarter of 2018 was unsatisfactory.

Rice expressed his frustration when working with EQT during this time, adding that advice and offers of assistance from the Rice Energy team was ignored.

“Every instance that we offered to EQT was ignored, rejected and rebuffed, and we were left with no other choice but to go and speak with the shareholders and ask us to allow them to have majority control of the board,” he said. A vote placed seven Rice candidates on the board and Rice was named CEO in July. “The shareholders are supporting us. The board is supporting us.”

Going forward, he said he intends to realize the full potential of the area, using new technology and transparency.

In the near future, they intend to develop multiple wells adjacent on multiple paths, which Rice said results in faster drilling and less disruption, maintaining operation and royalties to landowners.

“Over $1.5 billion has been invested in the heart of Belmont County, and that’s translated into production of about 800 million cubic feet of gas a day, is what we operate, and there’s another 400 million cubic feet of gas a day being produced by our partner Gulfport,” Rice said. “We’ve pretty much developed the majority of our half of the township. … There’s a lot more potential left for development in Belmont County in the southern portion. We are looking at ways we can continue to develop down there.”

He added EQT will continue to reach out to benefit the area’s communities through the EQT Foundation, a vehicle for charitable giving.

“This is going to be our vehicle to make significant donations,” he said.

Rice answered numerous questions from landowners afterward, including their measures in making sure royalty checks were correct. Rice said they were instituting better communication, which will result in changes.

“We’re not that far off from being able to fix those things,” Rice said.

Another said EQT had discontinued separately reporting natural gas liquids when they acquired his lease, and asked if the separate reporting would be reinstituted.

Others asked about a lack of production in some areas. Rice said gas prices have caused operations to decelerate their activities, and spending continues to drive operations.

“We’ve done our jobs and landowners and operators to set the table,” he said.

Guests brought up other issues such as royalties paid to the wrong people. Rice touched on the potential of the proposed PTT Global Chemical/Daelim Industrial Co. ethane cracker plant in Dilles Bottom.

Judy Burger of Pickering Road in Richland Township brought up concerns about a possible injection well Omni Energy Group LLC out of New Jersey intends to place at the intersection of U.S. 40 and Ohio 331. The permit is being reviewed at the state level and the proposition has faced local opposition. Burger said many are concerned about high traffic and the population and infrastructure.

Rice said the heavy traffic might be alleviated by using a pipeline to the well site. He said he could talk with the owner of Omni about his intentions. Rice added that EQT is committed to operations with minimal disruption to the communities. He said the industry is aware of the public’s concern about injection wells.

“Your voice is being heard,” he said.

“Right now, nobody knows what anybody’s doing, and they can’t answer no questions,” Merritt said of prior issues with EQT.

“That they were here and talking to us was a good thing. I hope things improve. EQT has not been as easy to get along with as Rice previously. Things aren’t going to change overnight, but hopefully they’ll improve,” Lowell Kemp, of southern Goshen Township, said.

Rice is in the process of visiting landowners including Greene and Washington counties in Pennsylvania, and Bridgeport, West Virginia.

An oil and gas education series is being offered 6 p.m. to 8 p.m. on Aug. 29, at MPR Supply Chain on Guernsey Street in Bellaire. It will involve a tour of MPR’s sand unloading facility. It will be open to the public. RSVP to Natalie Brown, president, at 740-391-6716.