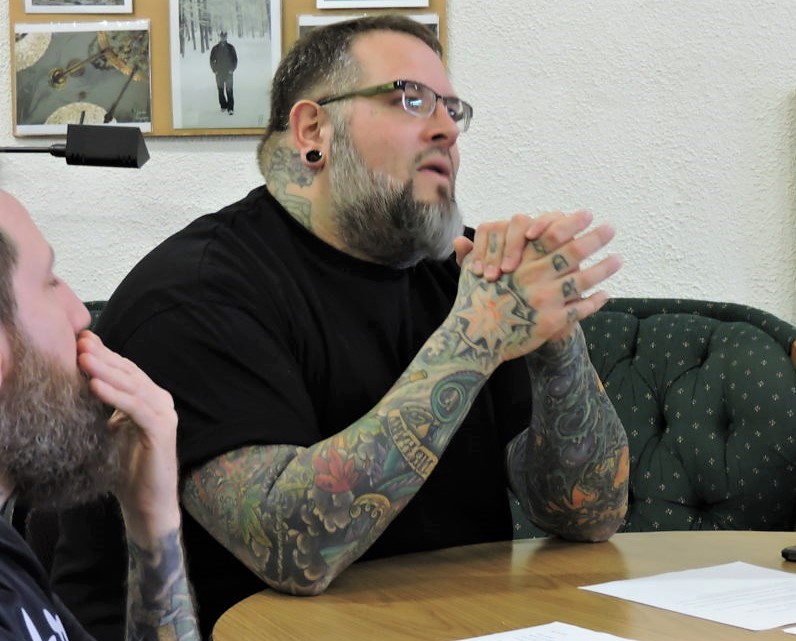 MARTINS FERRY — A benefit for a local tattoo artist who has made thousands of people happy with his ink skills and good, sweet nature, is set to take place tonight at River City Ale Works, 1400 Main St., Wheeling.

The evening begins and 8 p.m. and will include music, auctions, raffles and more.

A Go Fund Me page titled “Support for Sweet Chuck” also has been set up online. According to the page, Schorr was diagnosed with metastatic squamous carcinoma in May 2019.

“If you are reading this, consider yourself lucky. You are fortunate enough to know one of the finest people in the world. His name is John Schorr, but most people know him as Sweet Chuck. This nickname is aptly suited, as Chuck is one of the most generous human beings you will ever meet,” the page states. “He has done many good things for the betterment of the tattoo industry as well as the community of the Upper Ohio Valley. But now, in an unfortunate turn of events, he needs your help.

“In May 2019, Chuck was diagnosed with a form of cancer known as metastatic squamous carcinoma. Metastatic means it’s continuing to grow. It’s chronic and incurable. He has already started the first wave of what will be a lifelong series of chemotherapy treatments that will only be sparsely covered by insurance.”

According to the page, Schorr’s out-of-pocket medical expenses will average $4,000 per month. The effects of the chemotherapy also are expected to affect his ability to work, making bills more difficult to cover. The page, set up by Schorr’s friend Andrew D’Cagna, has raised $18,000 with a goal of $100,000.

A pre-concert dinner benefit at River City already is sold out.

Others fundraisers for Schorr are underway, are slated or are being planned. For example, Wheeling Threads has started a T-shirt fundraiser for Schorr. Designs can be viewed at www.wheelingthreads.com.

Artist and designer Daniel Finsley wrote on his business’ website that when he first got out of art school, Schorr helped him out by giving him his first freelance art job.

“The tattoo artist Scott showed Sweet Chuck my work. I was nervous, almost hellbent on saying, ‘Please don’t show him …’

“And to this day, I am so wondrously thankful that I did. Without hesitation Chuck closed my sketchbook and offered me a freelance project on the spot. My first ever! A project that was small in reference to his business, but wildly substantial to me,” Finsley wrote. “From that point that on, we had become friends. Ladies and gents, I love this man! Unfortunately, he has fallen upon hard times. … Let’s bring this together for him! Support the cause.”

Also, a Stand up to Cancer Comedy Show is set from 7-11 p.m. Sept. 20 at River City, Wheeling. Proceeds from this show also go to Schorr. Comedians will include Jason Banks, Page Creamer, Leslie Cavala and hosted by Cody LaRue.