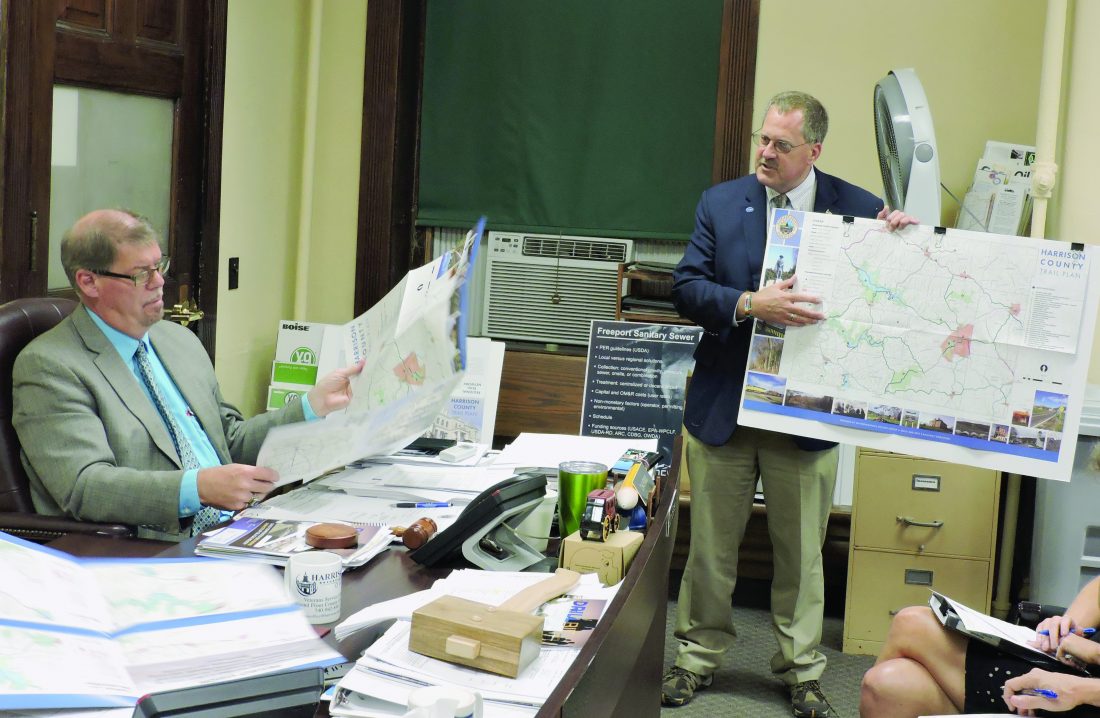 CADIZ — A plan for a trail through Harrison County which has been in the works for the past two years has finally come to fruition.

The project’s goal is a regional network of cultural, recreational and natural resources that promote tourism, alternative transportation, community and economic development.

“We’re extremely excited,” Rice said. “This marks a really significant moment in the development of the trail plan.”

The county is uniquely situated because of its location between the Ohio & Erie Canal Towpath Trail, to the west, and the Great Allegheny Passage Trail to the east, Rice said.

“The opportunity that we have here is really connecting between those two regional trail systems and literally bringing millions of hikers, bicyclists and horseback riders right here to Harrison County,” he said.

Rice said they have had a lot of really great input from those who use the trail on foot, bike and horseback in order to develop the plan. The coalition has also been working with other local organizations, including the Muskingum Watershed Conservancy and Buckeye Trail Association.

“Building off all those great partners, what we’d like to be able to do is to then build this network; so people can basically navigate the county through trails, either off-road trails or trails adjacent to run-ways. Working with the county commissioners, I think we’ve got a really great opportunity to do that,” Rice said.

Working with the local agencies will allow the project to build momentum and make the trail connections. Not only are trails great for aiding in wellness, exercise and educating about the heritage of the community, but also in economic development, Rice said.

Some of the destinations that will be able to be reached with the newly constructed trail will include Tappan Lake Park, Sally Buffalo Park, Clendening Lake, Piedmont Lake, Jockey Hollow Wildlife Area, County Fair Grounds and multiple museums.

“It’s good for the community, for quality of life, and good economic development,” Rice added.

Commissioner Don Bethel thanked Rice and the coalition for their hard work in getting the plan completed.

Norris read the agreement, which states that the coalition will provide technical assistance to commissioners in the development and implementation of the Trail Plan. The commissioners must provide reimbursement of $15,000 per year, in return for the services accomplished by the coalition.

According to the OECC, the Harrison County Trail Plan is a blueprint for the conservation and development of trails and green spaces in Harrison County, including regional connections to the 101-mile Ohio & Erie Canal Towpath Trail, the 320-mile Ohio-to-Erie Trail, 1,000-mile Buckeye Trail and the 325-mile Great Allegheny Passage connecting Pittsburgh to Washington, D.C.

The 3-year-agreement, ending in 2021, is to continue work and complete the trail plan.

At the beginning of the meeting, Bethel called for a moment of silence to remember those who perished in the Sept. 11 terrorist attacks, 18 years ago.