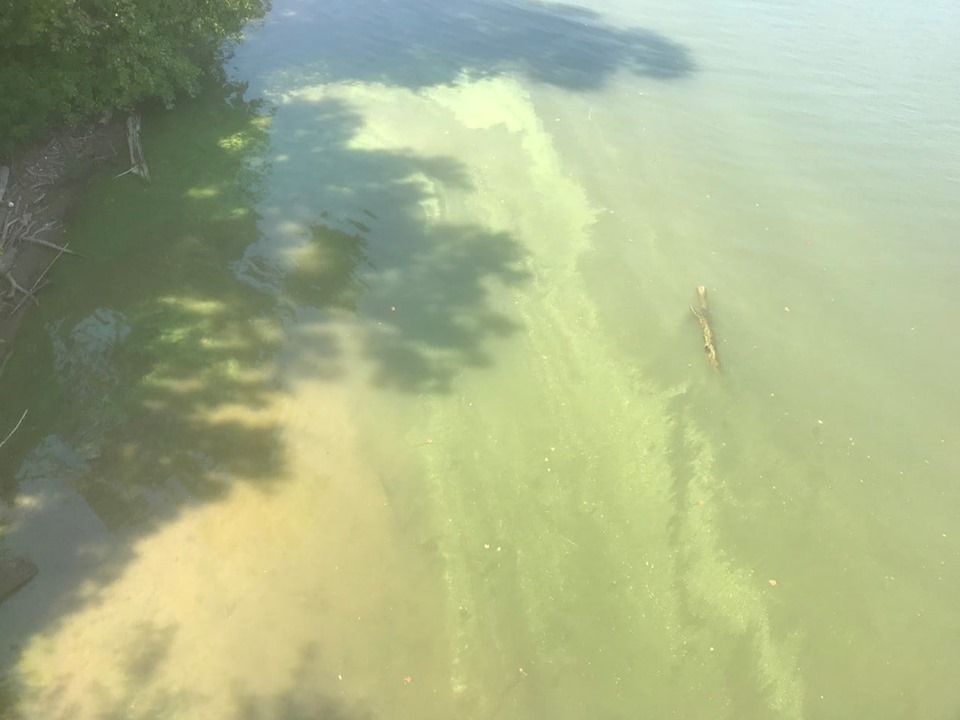 Photo Provided BLUE GREEN algae has been spotted in the Ohio River from the Greenup Dam to Pike Island Locks and Dam. Health officials warn people to avoid coming into contact with water containing the bacterium.

MARTINS FERRY — The Belmont County Health Department is asking people to avoid being exposed to blue-green algae that has been spotted on the Ohio River near the Pike Island Locks & Dam.

Rich Lucas, environmental director for the Belmont County Health Department, said the algae is actually a bacterium called cyanobacteria. It builds up during periods of little rainfall, causing waterways to be slow moving, allowing organic matter to build up. Add plenty of sunshine, and it begins to grow into what is called a bloom.

“You don’t want to come into contact with it. If you do, wash with soap and water,” Lucas said Thursday.

A press release provided by Lucas notes one should seek medical attention if symptoms such as skin, eye or throat irritation, allergic reactions or breathing difficulties occur while in contact with untreated surface waters. However, swimming, bathing or showering with water not visibly affected by a blue-green algae bloom is not expected to cause health effects.

The bacteria can also appear in different colors such plain green, yellow, brown or red. Cyanobacteria isn’t visible to the naked eye, but it often gives the appearance of algae when it clumps together in bodies of water. This bacterium is often found in stagnant freshwater during hot seasons with little rainfal.

Dogs and livestock also should not be exposed to algae blooms. Pets and farm animals can become sick if they ingest the tainted water or if they lick it off their fur.

Dogs more than other animals are vulnerable to ingesting the toxic algae because of their tendency to play in the water. If a dog is a fetcher and catches tennis balls or other round toys, this can lead to greater water ingestion and even water intoxication, the department advises.

Lucas said if a person accidentally ingested large amounts of water containing the algae they should seek medical help immediately.

“Look at the water before you jump in,” he said.

Lucas added that a plant, called duck weed, grows in ponds and resembles blue-green algea but is not harmful.