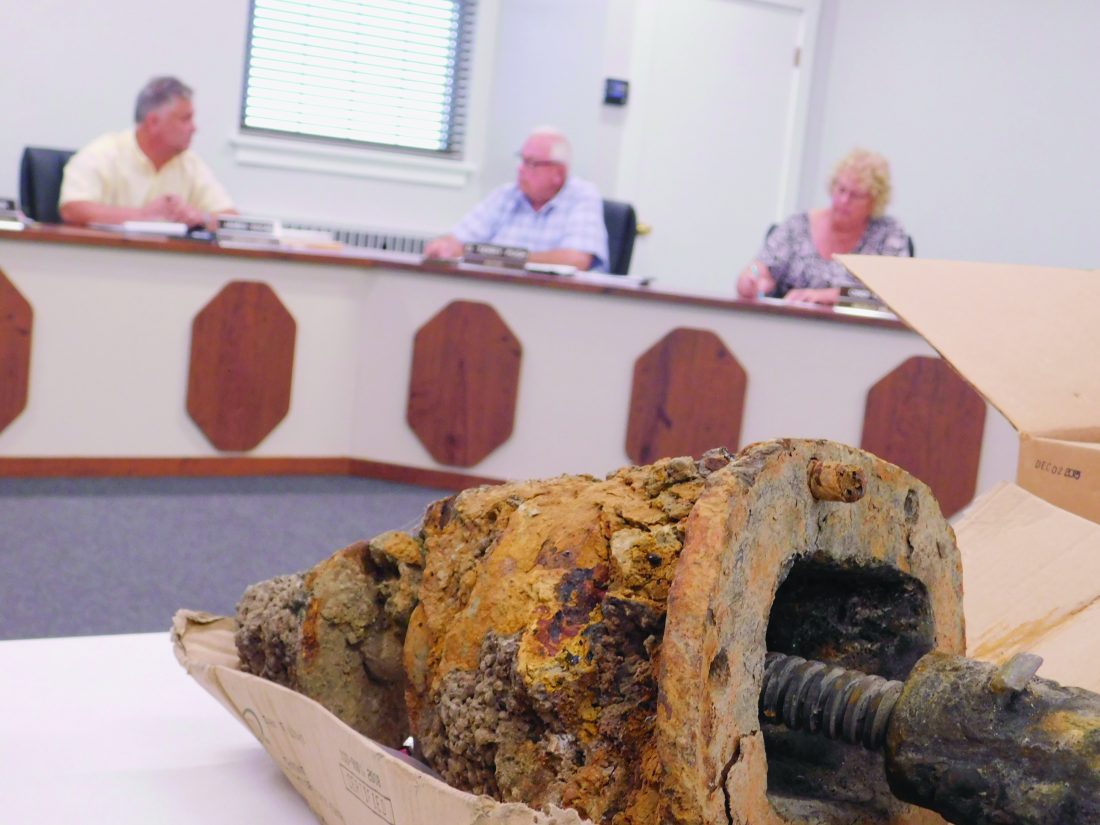 T-L Photo/ROBERT A. DEFRANK St. Clairsville’s City Council prepares Tuesday to discuss a contract to privatize the water and wastewater system. Afterward, council was notified that the Ohio EPA is requiring action to upgrade the aging system.

ST. CLAIRSVILLE — City leaders are coming closer to a decision over whether to sell St. Clairsville’s aging water and wastewater system just as the Ohio Environmental Protection Agency informed them upgrades are needed soon.

On Tuesday, the city council held a special meeting with Kimberly Bojko, attorney with Carpenter, Lipps & Leland, who has been negotiating on behalf of the city with Aqua Ohio, the private, state-regulated entity that has submitted a bid to take over the system, on a proposed contract.

After an executive session close to an hour and a half, Mayor Terry Pugh and Safety and Service Director Jim Zucal presented a notification from the EPA detailing the needs of the system.

Several weeks ago, EPA officials notified the city that algal blooms at the reservoirs could potentially lead to toxins. Zucal said they are following up with violations and directives.

“I can’t express to council and the public the severity of this,” Zucal said, adding the notification was reviewed at multiple levels of the EPA before being delivered to St. Clairsville Tuesday. “This is a very, very serious matter. … They’re giving us requirements that are very taxing, very, very expensive. …There’s tens of millions of dollars of requirements. They point out the inadequacies of our system, particularly our plant. …They talk about everything, our water from the source to the tap.”

Zucal said he and Pugh will continue to meet with EPA officials in the coming weeks.

“These are items, according to their words, shall be fixed,” Zucal said, adding that they expect a letter of response in 30 days. “It’s the whopper of all letters, and it came from the EPA itself.”

Zucal also said the EPA indicated they were unlikely to grant St. Clairsville another continuance in finding a new Class 3 water operator. The city will face a fine of $25,000 per day if an operator is not found by Oct. 8. Pugh said the city is advertising for operators and has not received resumes. In answer to another question from Oprisch, Zucal said the city was advertising in trade journals, the Ohio Operator Training Commission and other entities.

A crowd had gathered in the council building at the beginning of the meeting. During the executive session they gathered outside at an inflatable protest display where several speakers, including mayoral candidate Kathryn Thalman, spoke against privatization and in favor of local control and expressed concerns that a corporate entity such as Aqua Ohio would not be responsible to the residents or accountable to them.

The next council meeting is 7:30 p.m. Monday, where they are expected to hold the first reading of the proposed contract with Aqua Ohio, and possibly the first reading of a resolution calling for a study on the water system and the city’s options for retaining ownership.