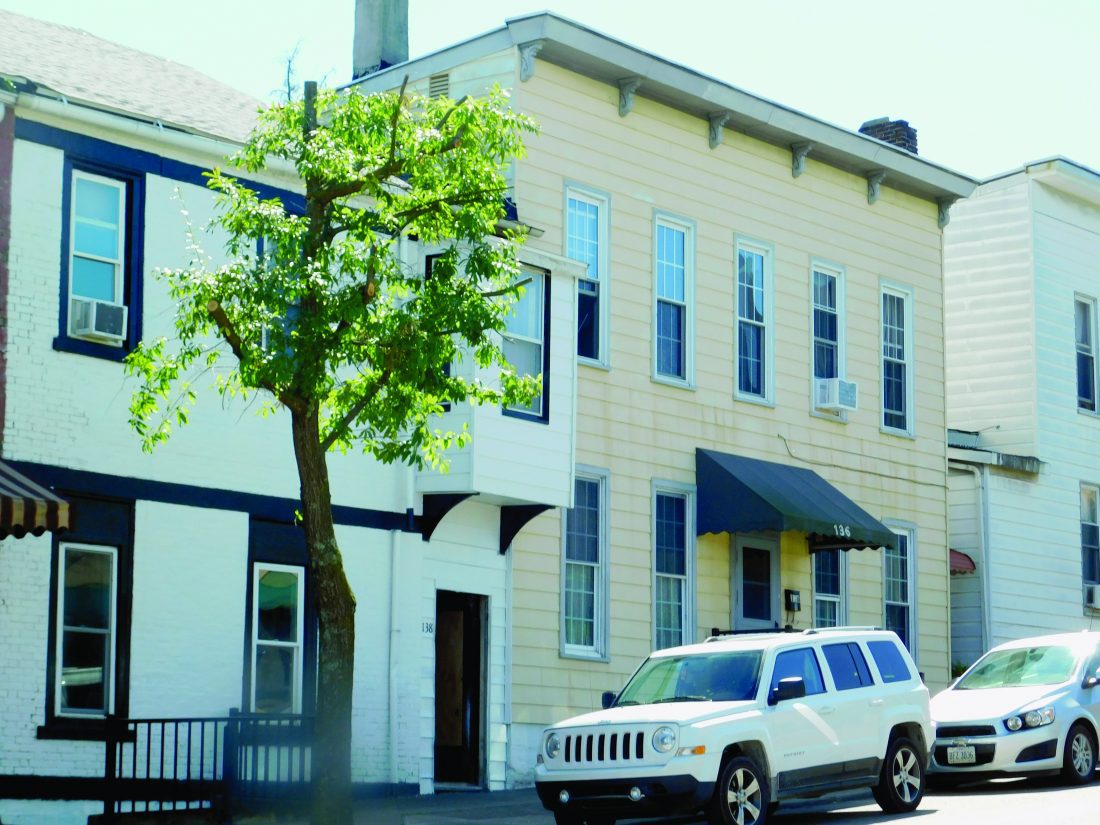 T-L Photo/ROBERT A. DEFRANK Some St. Clairsville residents have expressed dissatisfaction with last week’s tree trimming on Main Street. Others found the change an improvement.

Gabe Hayes, businessman at Wallace Pancher Group at East Main St., went to social media last week to describe the trimming as a “hack job.” Hayes went on to post that the trees had been selected and properly maintained, and had provided a 14-foot canopy. He said he believed the natural structure of the trees were damaged and that their future their root growth would damage concrete. He also pointed out a lack of shade on the street and said the cuts could become infected.

Mayor Terry Pugh said the trees had grown out of control to the point of being a nuisance, and that tending should have been ongoing for years.

“I have heard from business owners who own buildings that they are very happy to have the trees trimmed,” Pugh said. “The limbs were on the roofs and on the sides of their buildings, and the fact that customers were actually running into some of the limbs of the tree when they were getting into their cars. … I’m not an arborist, but I wish people were more concerned about infrastructure of the city than trees on Main Street, which I think have opened up Main Street.

People can see the buildings now, and the building owners are happy about the changes. … As totally out of control as those trees were, they did a fine job trimming them.”

“I would say that it was a very intense trimming,” he said. “I’m an arborist and an Ohio Master Tree Farmer. I love trees. The trees will grow back.”

Zucal added that the trees had not been maintained.

“A tree is like a puppy. You’ve got to think about what you’re going to have when it’s fully-grown,” Zucal said. “Time has went by and some of those trees had really spread out and were touching buildings. The roots were lifting walks. … They were out of shape. Give it time, they will grow back.”

Former Mayor Bob Vincenzo said the trees were planted between 1989 and 1990, during a downtown renovation program.

“They’ve been there over 30 years,” he said, adding that the trees were well-maintained but never trimmed. “When those trees were selected, they were special. The roots were not the kind of roots with the growth that would push up the sidewalk. That’s why those type of trees were selected. They were slow-growth.”

He said they were selected for the canopy they would provide the sidewalk.

“They’ve been there for 30 years. Those canopies were also a type of tree that would not engulf the whole area. My opinion of this is they were never designed to be cut or trimmed out heavily,” Vincenzo said. “They were designed for cityscape not to allow heavy growth to overcome the area.

The trees were oaks, maples, and small ornamental trees.

“It’s a very good change. It’s safer. We can see. It lets the lights light up the street,” Police Chief Jeff Henry said. He said passing trucks would often hit the branches and knock them off, and the street department would clean them up.

“Downtown doesn’t need to have huge trees, and in my opinion they planted the wrong kind of trees.”

Some business owners were happy with the work.

“I’m fine with the tree-trimming,” Krista Kinney, owner of Bud’s Bloomers Flower Shop, said. “It doesn’t bother me. I think it’s what you have to do to keep the trees growing properly. It actually helped our business. It helped to show the front of our business. Maybe some others it effected, but it didn’t effect me negatively at all.”

Kerith Palmer, owner of The Boutique on Main was generally positive about the trimming.

“The trees were beautiful and you could definitely get a scent from them, the wafting smell of them was very nice,” she said, but contrasted this to the unswept sidewalks. “They aren’t as beautiful as they were, but the sidewalks are a lot cleaner. I feel like when I open my door, a lot of the leaves and stuff were flying in. Other than that, I think they could have done a prettier job of it.”

“As soon as I saw them I was like: ‘They butchered our trees,'” Joyce Paglialunga, owner of From Past to Present quit store, said.

She was concerned that the trees may not grow back as they were.

“That tree was pretty full in front of my shop. I liked it. I’m for flowers and I’m for trees. I think it makes our city beautiful. That’s what people say. They think our town’s quaint.”

“I enjoyed the shade,” John Paglialunga, her husband said. “I would sit out there in the shade.”