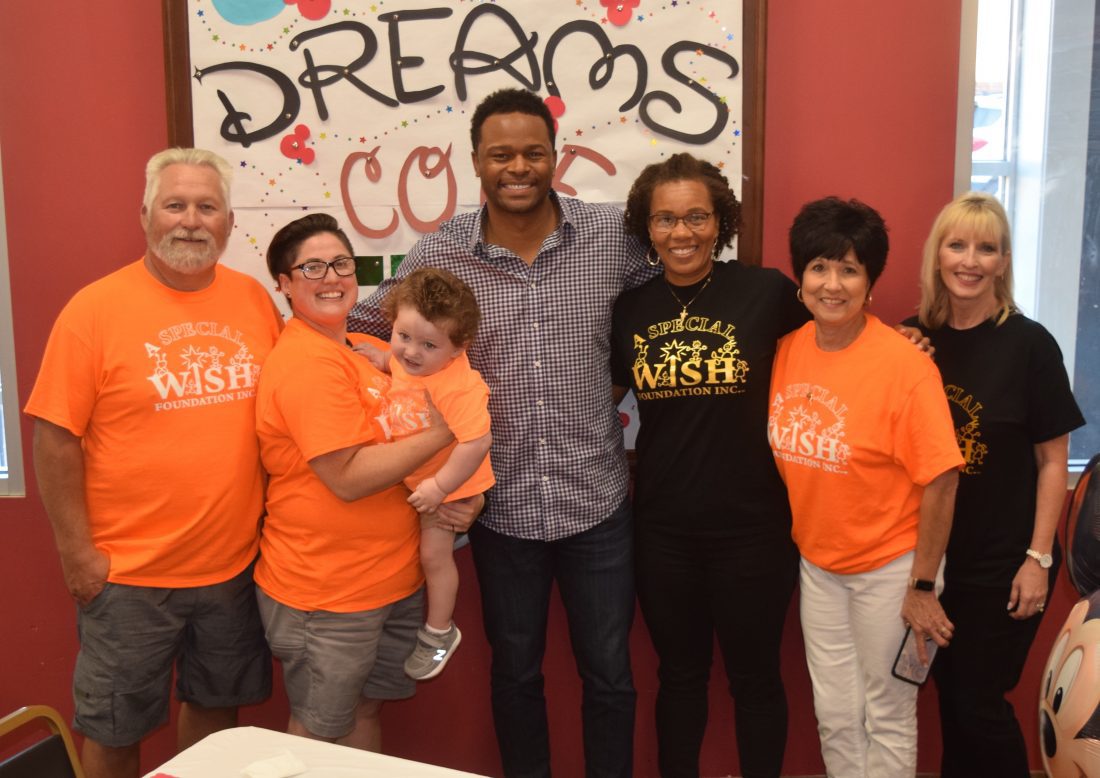 WHEELING — A person meeting Dominic Cecil for the first time would simply have no idea that the recently turned 2-year-old is battling a serious medical condition.

Cecil, who goes by “Doc” among family and friends, was born Aug. 25, 2017, with hypoplastic left heart syndrome. HLHS is a condition affects normal blood flow through the heart.

To hear his mother, Ricci, explain it, Doc has “half a heart.”

“It’s actually a little bit less than half because the left side of his heart isn’t functioning the way it’s supposed to,” Cecil told an audience of some 100 people Thursday morning at the sixth annual Soup Kitchen of Greater Wheeling Charity Breakfast. “But, looking at this little man running around here, and I hear it all the time, you’d never know.”

Doc has undergone three open-heart surgeries with a fourth scheduled for the summer of 2020.

His first operation was performed three days after he was born with the second coming three months later. Just three months ago, he endured his third procedure.

“He’s an amazing little boy who has conquered so much,” Cecil said. “I know he’s conquered more than I ever have in my life.”

Doc and his family were on hand at the breakfast as the guests of honor. After breakfast, the Cecil family learned Doc was having one of his wishes granted by A Special Wish Ohio Valley.

Alicia Freeman, executive director of A Special Wish Ohio Valley, informed the family that in just a couple of months they will be venturing off to Orlando, Florida, for seven days and six nights at Walt Disney World.

“This is like a dream come true for Doc,” Cecil said.

The Cecil family was pointed toward A Special Wish Ohio Valley by another family who had seen the work of the organization firsthand.

“A family told me that (Doc) would be a perfect candidate for a wish,” Cecil said.

From there, Cecil reached out to A Special Wish and the ball was officially rolling.

“He was actually approved at 3 months old to have a wish granted,” Cecil said. “As a family, we wanted to wait, though, until he got a little bit older, so he could really enjoy it as much as possible.”

A Special Wish asked the family to submit some possible wish ideas. Along with Walt Disney World, the family expressed its love for the Pittsburgh Steelers and inquired about game tickets, a meet and greet with players and a possible stadium tour.

The family actually got a little bit of its second wish, too.

After the Disney announcement was made, former Steeler defensive back Will Allen made an appearance and presented Doc an autographed hat.

“We gave Special Wish two wishes and they pretty much fulfilled both of them,” Cecil said. “This is just an amazing day. I can’t even put into words what this means to our entire family.”

Keeping with the football theme, the Wheeling Park High School Band Drumline was also in attendance.

The trip to Disney will be complete with all of the bells and whistles, including a visit to every park, breakfast with Doc’s favorite character, Mickey Mouse, and accommodations at Give Kids the World Village, which Freeman said is like an amusement park in and of itself. Plus, A Special Wish will arrange a “special experience just for Doc.”

“This means more to us than you could ever imagine,” Cecil said. “I feel like we’ve gained another family member in Alicia. She’s been fabulous, and I can’t thank her enough for her help and effort in making all of this happen.”

However, when Doc and his family return from their vacation, more medical treatments await.

“Doc gets quite a bit short of breath when he’s playing, but the next surgery should help with that and allow more oxygen to his lungs,” Cecil explained.

Assuming the procedure scheduled for next summer goes well, Cecil still believes her son will “need a heart transplant.”

“Eighty percent of the HLHS babies do,” Cecil said. “But, we’ve seen some babies who haven’t, and they’re able to go out, play ball and do everything that other kids are doing. We’re hoping that Doc eventually can get into all of that stuff. Doc is amazing and he’s my hero.”

The most recent wish to be granted is the 13th that A Special Wish Ohio Valley has provided for local residents since Freeman took over as executive director.

“This is an incredible blessing, and I really feel like God has put me in this position and I just get to go out and do His work,” Freeman said.

According to Freeman, several more wishes could be granted in the coming weeks and months.