Bridgeport graduates give back decades later 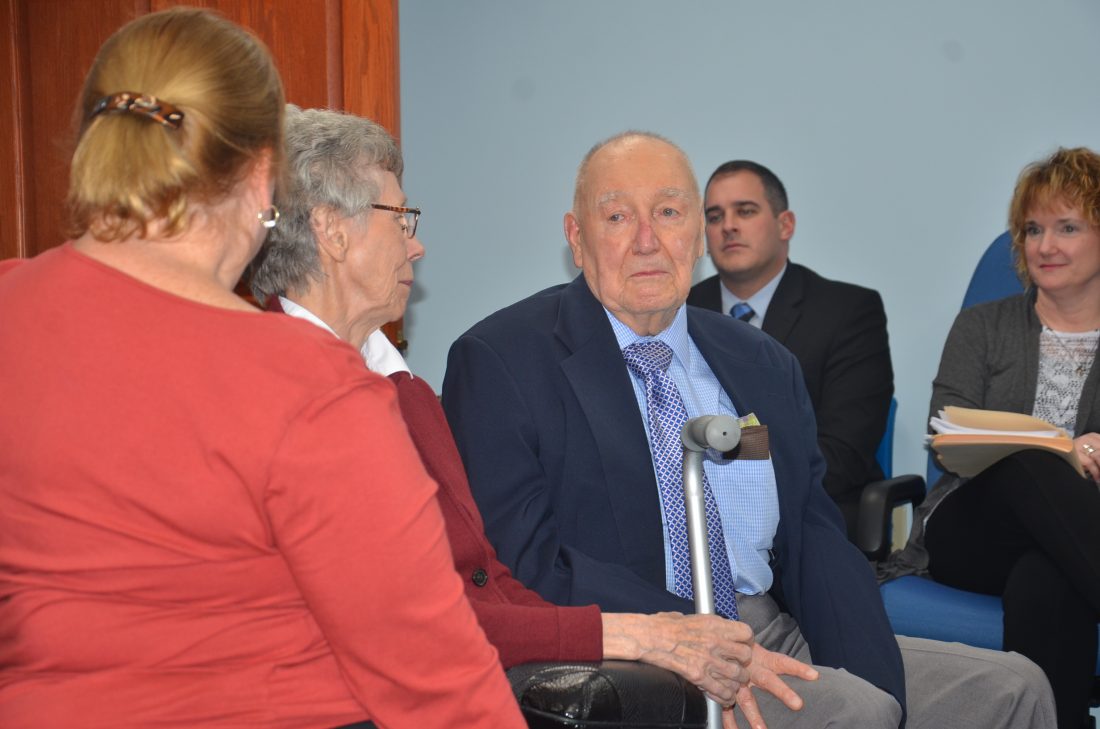 NELSON MILLER graduated from Bridgeport High School in 1946. His late sister, Norma, graduated a year earlier. She started a grant program that has helped many schools, including her alma mater.

BRIDGEPORT — Over the past seven years, the Bridgeport Exempted Village School District’s kindergarten program has received more than $25,000 in grants from a foundation started by a district graduate.

The Miller-Daffin Family Foundation was started in 2012 by 1945 Bridgeport High School graduate Norma Miller, who is now deceased, according to her brother, Nelson, a 1946 BHS grad.

“She started the foundation with $35,000, and we have given more then $350,000 in the last 10 years,” Nelson Miller said at a recent Bridgeport Board of Education meeting. “We give money to schools in four states.”

He told of one school in North Carolina that has 98 percent free-or-reduced student lunches.

“They need the money badly,” he said. “Bridgeport, however, is our favorite one. They follow the instructions to the T, and they do a good job.

“We just give them the money. They’ve done all the work with it,” he added. “Your kindergarten class teachers really hit everything on the head, and you should be proud of them. They are perfect. I’d have to give them an A. Make that an A-plus.”

Michelle Heilman, one of four kindergarten teachers, expressed her thoughts to Nelson Miller.

“I am very grateful for your generosity. In 2012, we were awarded $4,500 and then we received $1,500 that same year. We purchased iPads and learning stations that year,” she said. “The following year, we were lucky enough to keep going with $2,100 for three student desktops, which really helped out for our stations because we usually rotate in groups of four and we only had three, so that was very beneficial.

“The following year we got $5,000 which we used to purchase iPads. In 2015-16, every year we kept on improving our learning stations to add more materials. To date, we are at $26,195 thanks to you and your foundation. We really do appreciate it.”

“We are so grateful and it has been a pleasure to have met you. It was about 2012 that we started talking and I think we have developed quite a relationship, not just for the money but for everything it stands for,” she acknowledged. “It means a great deal to me, and I know it means a lot to the kindergarten team.

Cathy DePalma said, “I am a kindergarten title teacher, but four years ago I had my own classroom. It’s amazing the amount of things that we have been able to get for the kids to use, and they love it. They don’t realize they are learning because we have designed some really fun games and manipulatives. They enjoy it so much, and they are learning and having fun at the same time.”

Morgan Castello added, “I just recently started teaching four years ago. Coming in as a first-year teacher I really didn’t have much so it was really beneficial to have some spending money for my classroom,” she noted. “I was able to get all kind of manipulatives for the kids to work with. It was a huge help from you to a first-year teacher. Thank you.”

“I didn’t know what manipulatives were but my daughter, Terri, is in her first year of retirement after a teaching career and she told me what they were,” Nelson Miller allowed, as the room burst into laughter.

“I’m not only grateful for the money that you’ve given to the school district, but I also received your scholarship in 2014 which helped me get my education degree. That is what brought me here to Bridgeport,” she said. “I wanted to touch on something that I bought for my students as a first-year kindergarten teacher. I’m a big proponent of social-emotional learning. I think kids should practice communication skills and critical thinking.

“We’re going to start something called ‘brain bins’ where the students have manipulatives and they have a partner,” she noted. “They will actually be able to build and design by communicating with their partner. I think that will help the communication piece that our kids are missing.”