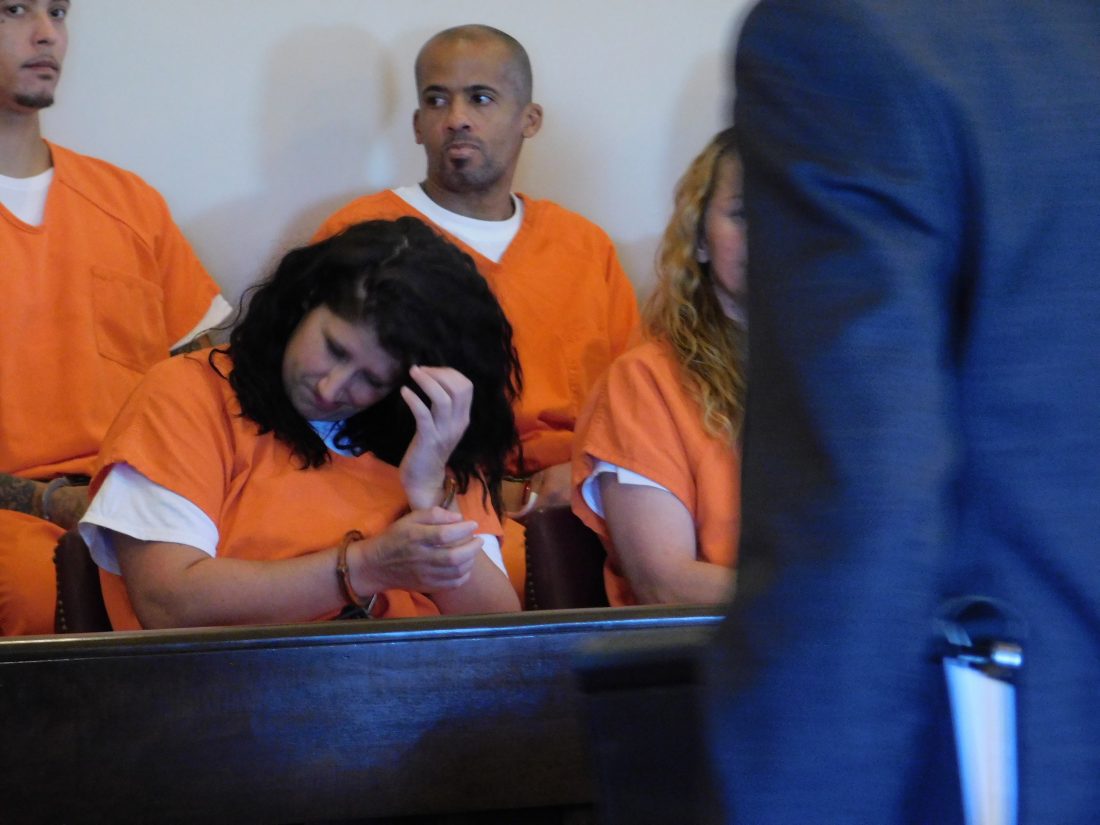 T-L Photo/ROBERT A. DEFRANK Meredith Broome is sentenced Tuesday to six months in jail for obstruction of justice. Broome is the stepdaughter of the late Marvin Brown, a former Powhatan Point mayor and businessman. She was found guilty of assisting her mother in attempting to conceal her mother’s thefts from Brown’s business.

ST. CLAIRSVILLE — Anger and condemnation marked the Tuesday sentencing hearing of Meredith Broome after she was found guilty last month of assisting her mother in attempting to conceal thefts from Broome’s stepfather’s business.

Broome, also known as Meredith McLeod, is the stepdaughter of the late Marvin Brown, a former Powhatan Point mayor and businessman.

Broome was convicted in a late-September trial of felony obstruction of justice for her part in attempting to assist her mother, Brown’s widow, Deborah Doty Brown, in preventing him from discovering Doty Brown’s thefts from his business.

Belmont County Common Pleas Judge John Vavra imposed a sentence of six months in jail with credit for 71 days served, and six months at the Eastern Ohio Correction Center, followed by one year of community control sanctions. A violation could result in one year in prison.

Broome originally had gone to trial last year, facing charges of obstruction of justice and tampering with evidence.

The jury found her innocent of the tampering charge but were deadlocked on the question of obstruction.

During the September trial and last year’s trial, prosecution reviewed the facts of the case, noting that Doty Brown had stolen hundreds of thousands of dollars from Brown’s business for drugs and gambling, adding Broome shared in some of the drugs.

Marvin Brown was murdered in November 2013 during a home invasion.

Brown’s sons, Mike and Tom Brown, both spoke at the sentencing and took exception to the suggestion by Broome’s attorney, Dennis McNamara, that Broome was remorseful regarding the obstruction charge.

“I’ve seen no remorse. Everything is everybody else’s fault,” Mike Brown said. “I don’t understand it. It’s been (more than) five years … since this all went down. Our family’s been dealing with it. … All this mess that happened should not have happened.”

He addressed Broome, condemning her drug use and dishonest behavior at Marvin Brown’s expense.

“This case and the sentencing does not mirror … the service of justice … that need to happen. Whatever does happen is a blessing right now, but it’s not near over,” Tom Brown said.

Vavra added that when Broome was taken into custody after her guilty verdict she tested positive for marijuana, a violation of her pre-trial bond conditions.

“There’s a pattern of drug abuse. It doesn’t appear as if she has ever availed herself of treatment options,” Vavra said. “I can find nothing in any materials in this file that indicate of any showing of any remorse whatsoever for what she did.”

Vavra also said she had no prior convictions.

“I cannot send her to the penitentiary, but if it was just up to me and I wasn’t bound by those other laws, that’s where you’d be going,” he said.

Steven Moore, 38, who has pleaded guilty to killing Brown, is awaiting sentencing in December for aggravated murder and aggravated robbery charges with gun specifications.

In other court matters, no plea agreements have been reached in the cases Gary Edward Anderson-Myers, 33, of 1731 Guernsey St., Bellaire and Erik M. Bartnicki, 35, of 71919 Gray’s Ridge Road, St. Clairsville. Both are set for trials later this month.

Anderson-Myers is accused of kidnapping and aggravated burglary allegedly occurring Aug. 15. He reportedly abducted Jamie L. Jackson, 35, after an apparent domestic dispute at the Belle Village Apartments in Bellaire. Jackson was found unharmed six hours later. He is set for trial Oct. 24.

Bartnicki is accused of felony rape allegedly occurring May 27. According to the prosecutor’s office, the alleged victim was an adult female known to him. The offense allegedly occurred at her residence in the Martins Ferry area. He is set for trial Oct. 29.