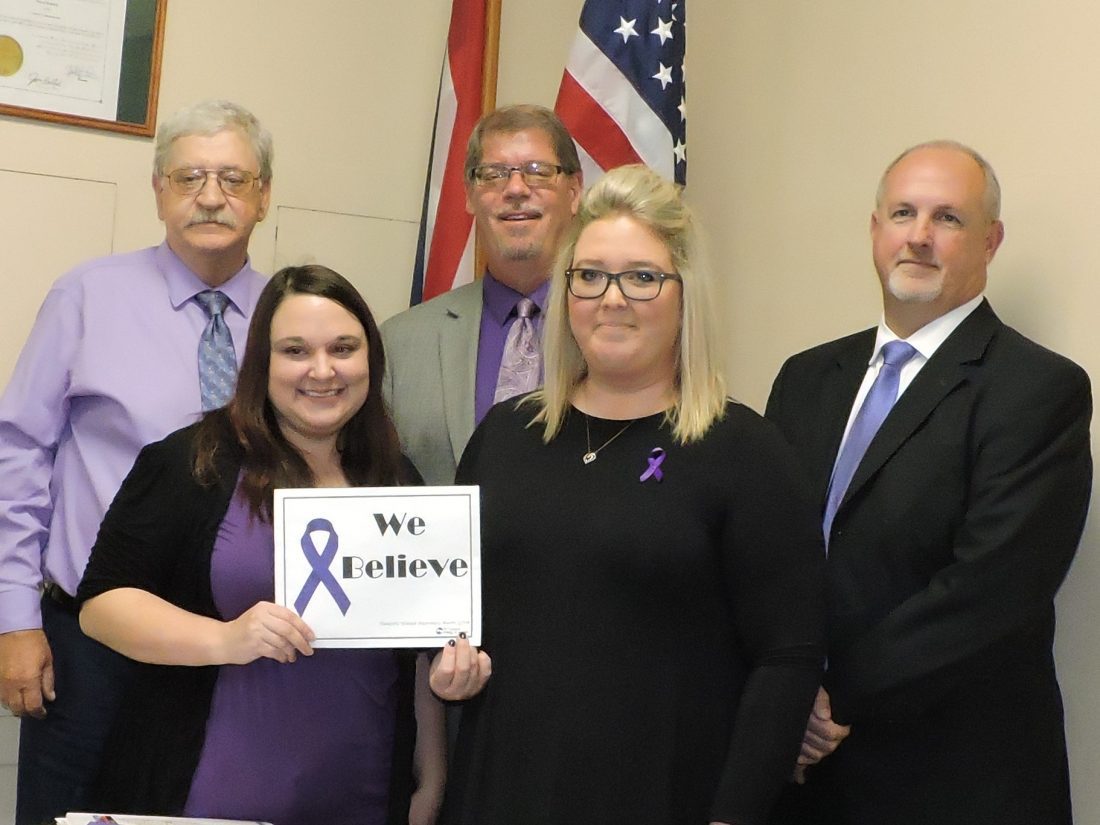 CADIZ — In honor of Domestic Violence Awareness month, the Harrison County Board of Commissioners wore purple to show their support.

The color is the national symbol for support of survivors and victims of domestic violence. Administrative Compliance Coordinator Chelsea Scott has been going throughout the local counties this week to declare October Domestic Violence Awareness Month.

“Every person has the right to live in a non-violent home and community. … The problem of domestic violence affects all citizens of Harrison County, and is not confined to any particular race, gender, age, social, religious, ethnic, geographic or economic group,” she said.

Scott said the economic impact of domestic violence includes a total loss of 8 million days of paid work each year, the equivalent to 32,000 full-time jobs, with 21 percent to 60 percent of victims losing their job each year due to reasons stemming from domestic violence. Only a coordinated community effort will put a stop to the crime, she added.

“The crime of domestic violence violates an individual’s privacy, dignity, security and humanity due to the systematic use of physical, emotional, sexual, psychological and economic control and or abuse,” she said.

The resolution then stated in recognition of the important work done by Tri-County Help Center and other victim service providers, the Harrison County Board of Commissioners recognizes October as Domestic Violence Awareness Month. The resolution was unanimously passed.

Commissioner Don Bethel thanked Scott and TCHC for their effort in the fight against domestic violence.

“We certainly appreciate you bringing attention to this issue. It affects a lot of people, too many people feel trapped in that situation especially if they’re working somewhere where they don’t have family near, they’re the ones who have to lose their jobs to escape because they want to leave the house,” Bethel said.

“It’s a difficult situation, I am familiar with. A relative of mine went through that and we got her out. Thank you for what you guys do.”

The TCHC aided a total of 780 survivors in the previous year, Scott said. That number includes all of the organization’s victim assistance programs, she said.

“All of our 24-hour hotline calls, our legal advocacy services in all three counties: Belmont, Harrison and Monroe. It includes our Rape Crisis Advocacy services and the number of shelter clients. We had 80 shelter clients in the year 2018, adults and children; and we provided 323 nights of shelter in the calendar year, but it ended up being about 1,100 nights for those 80 victims we were able to serve,” Scott said.

“Very often,” Scott replied. “Statistics show that a victim will leave their abuser up to seven times; they’ll continue to go back those seven times before they’re able to finally break free from the cycle of violence.”

The commissioners then thanked Scott again for her efforts in aiding victims and in raising awareness.

Commissioners Dale Norris and Paul Coffland were also present for the meeting.

The TCHC will be hosting multiple events this month in honor of Domestic Violence Awareness Month. The advocacy group is also holding a social media campaign,“31 Days 31 Ways.” Each day, the group will post a photograph on Facebook that includes an individual or agency that is supporting victims of domestic violence with the theme “We Believe.” For more information on TCHC, visit the organization’s Facebook page or call 740-695-5441.