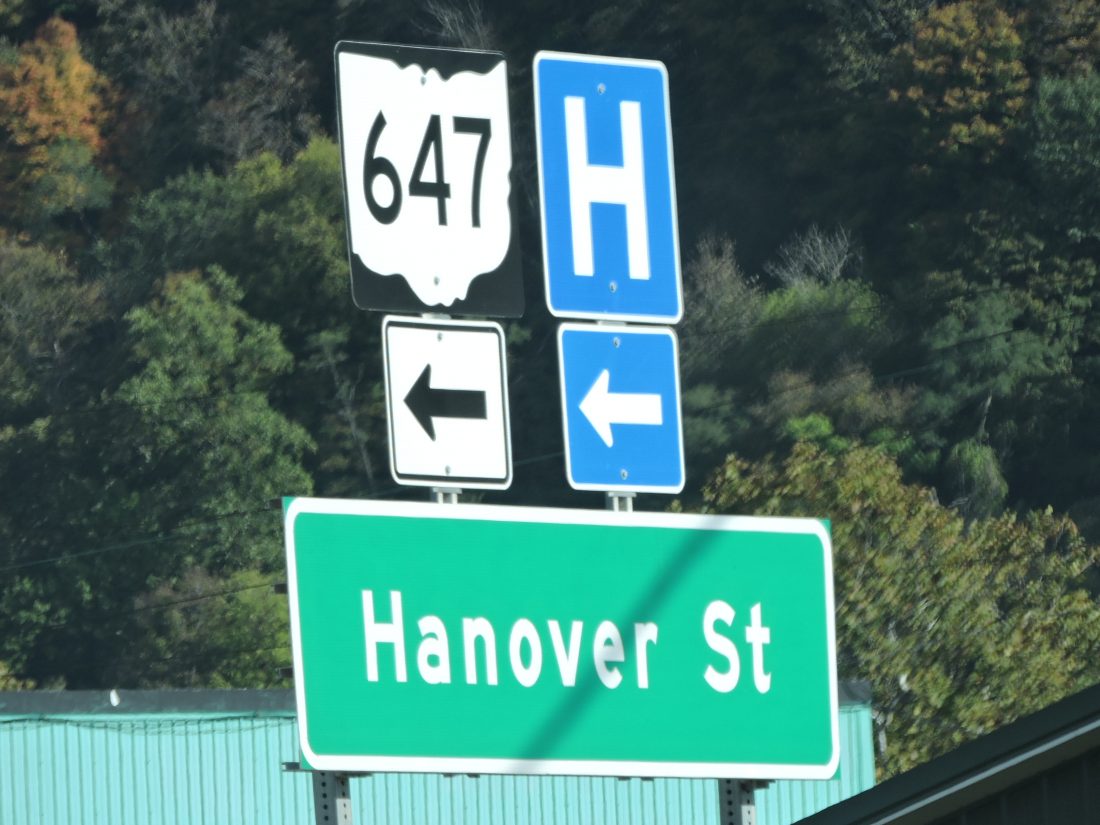 T-L Photo/SHELLEY HANSON A BLUE and white capital “H” sign on Ohio 7 lets drivers know a hospital is nearby in Martins Ferry. However, the facility, East Ohio Regional Hospital, is closed.

MARTINS FERRY — It’s been weeks since the closure of East Ohio Regional Hospital and apparently no deal has been made yet for its purchase.

Meanwhile, the large blue and white highway signs alerting motorists a hospital is ahead still remain on their posts on Ohio 7. They have not been covered or removed since the facility’s emergency room was closed last month.

EORH stopped taking patients the night of Sept. 27. The facility’s owner, Alecto Healthcare Services Inc. of California, still had a few long-term care patients remaining, but by Oct. 7 they were transferred to other facilities.

Regarding the remaining signage, Lauren Borell, Ohio Department of Highways spokeswoman, said the signage on Ohio 7 is ODOT’s responsibility. But she said workers would not take down the signs until ODOT is told by hospital officials that the facility has been closed.

She said if ODOT knew for sure the facility was permanently closed, crews might go ahead and take down the signs.

“We’ve never had one close before,” Borell said of a hospital with signs on a state highway. “We’ve put them up, but we’ve never had to take them down.”

Borell said ODOT likely would not put any temporary covers over the signs in the meantime. She said the signs within the city limits would be under the care of the city of Martins Ferry and that it would be the city’s responsibility to remove or cover them.

These highway signs are installed to let people know a medical facility is nearby. They also serve to guide ambulance drivers.

Meanwhile, rumors have been swirling around the community that negotiations for a possible sale of the facility continue.

“What I can tell you is there still is work being done and that they postponed it to try and settle a few other things, and until I hear anything from them I won’t say another word,” Krajnyak said to Hord.

Daniel Dunmyer, president and CEO of EORH and the now-closed Ohio Valley Medical Center in Wheeling, could not be reached Friday for comment. Alecto also owned OVMC. It was shut down on Sept. 4. Medical Properties Trust of Alabama owns the actual EORH building and leased it Alecto.

Since the hospitals’ closure, other local facilities have been making plans to take on more patients and offer additional services. However, local leaders and residents are concerned about emergency care not being available at EORH and OVMC anymore.

Local EMS crews also have expressed concern about having to transport their patients longer distances for care. They also are worried about traffic related to highway construction happening on Interstate 70, making it more difficult to reach the next closest ER at Wheeling Hospital.

The West Virginia Division of Highways’ Interstate 70 Bridges project is expected to begin next year and last until Summer 2022. However, preparations already are being made to Interstate 70 near Bridgeport that include lane restrictions and a planned crossover pattern. Add a closed Wheeling Suspension Bridge to the mix and getting around the Wheeling area has become even more difficult for drivers.

Martins Ferry EMS Coordinator Dave Snyder said his EMTs have not had to transport anyone to Trinity Medical Center in Steubenville since the closure of EORH’s emergency room. The majority of their patients have been transported to Wheeling Hospital with a couple going to WVU Medicine Reynolds Memorial Hospital in Glen Dale.

“With road closures and construction, it’s been a burden on our response times and transport times. For the most part we’ve been managing with it very well,” he said.

Snyder said when encountering traffic, if a patient is non-critical drivers will shut off their emergency lights and go with the flow of traffic. However, if a patient is critical, such as having a heart attack, in labor or having a stroke, then the ambulance will turn on its lights to encourage other motorists to get out of the way.

“We hope they move out of the way for us. We’re only requesting the right of way. We don’t always get that request, but they are supposed to yield to an emergency vehicle,” Snyder said.