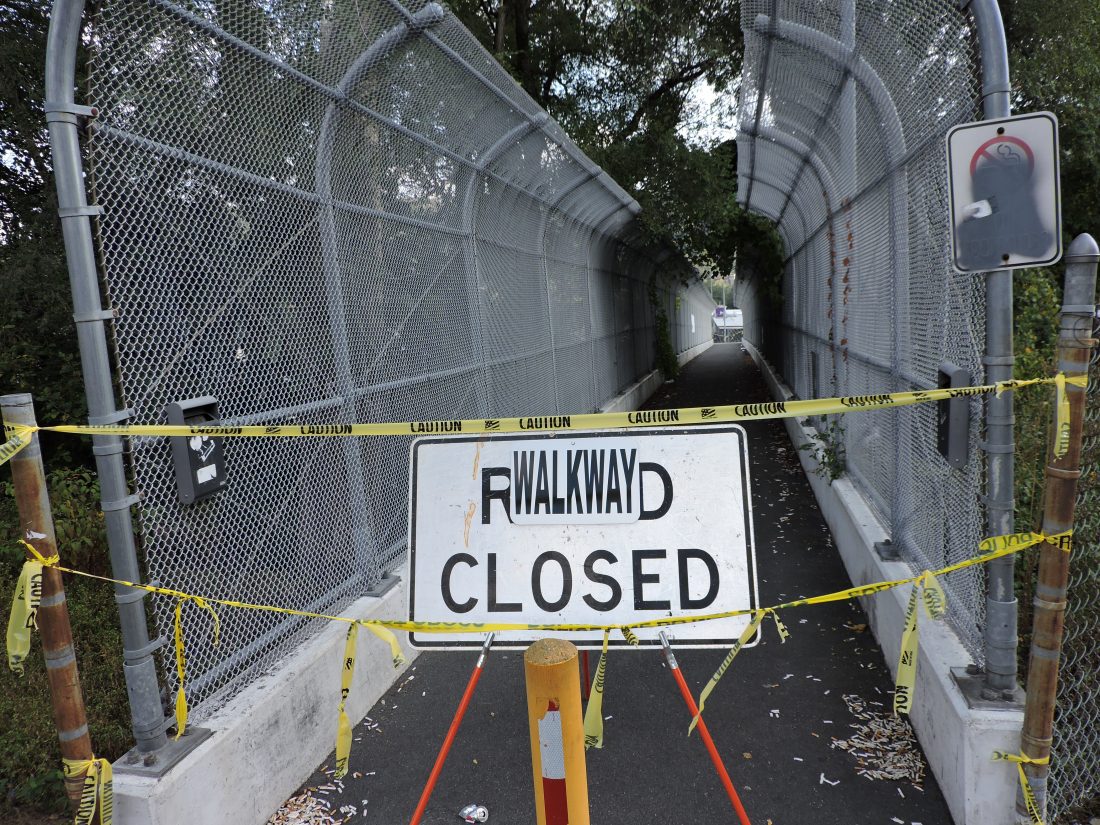 T-L Photo/SHELLEY HANSON THE FOOT BRIDGE in Martins Ferry that spans Ohio 7 remains closed until the Ohio Department of Transportation can inspect the extent of damage caused by a crane on a truck hitting it on Friday.

MARTINS FERRY — A foot bridge damaged by a crane passing beneath it on Ohio 7 on Friday is not expected to reopen this week.

The bridge is located adjacent to the East Ohio Regional Hospital building off Fourth Street in Martins Ferry. It frequently is used by people wanting to cross Ohio 7 to reach the Martins Ferry High School football stadium and businesses in the First Street area.

On Friday, a crane being transported on Ohio 7 struck the bridge, shutting down the highway until it could be cleared of some debris that fell. No one was injured, but the bridge was damaged. Some debris also hit a vehicle traveling on the roadway.

Martins Ferry Service Director Scott Porter said Tuesday that the bridge will remained closed until the Ohio Department of Transportation, which owns the bridge, permits it to be reopened.

“The engineers are supposed to be coming this week. It may not be open for Friday (football game). We’re not going to open it until ODOT gives the OK. We want to err on the safe side,” Porter said.

Many people park in a lot near the bridge and use the span to reach the stadium. People in the city not wanting to drive to the football stadium have used the foot bridge for years to reach the field as well.

“I know it’s inconvenient, but I’d rather it be inconvenient rather than it be loaded down with people” and it break, Porter said.

Lauren Borrell, ODOT District 11 spokeswoman, anticipates inspections will begin this week, but she said the bridge likely will not be open on Friday for people to use.

“The bridge will remain closed until further notice. We’re currently doing inspections on the bridge to see how much damage it received,” she said. “Once we know that we can move forward with a permanent fix.”

During the accident, a light pole also was struck. An I-beam on the foot bridge was twisted from the impact.