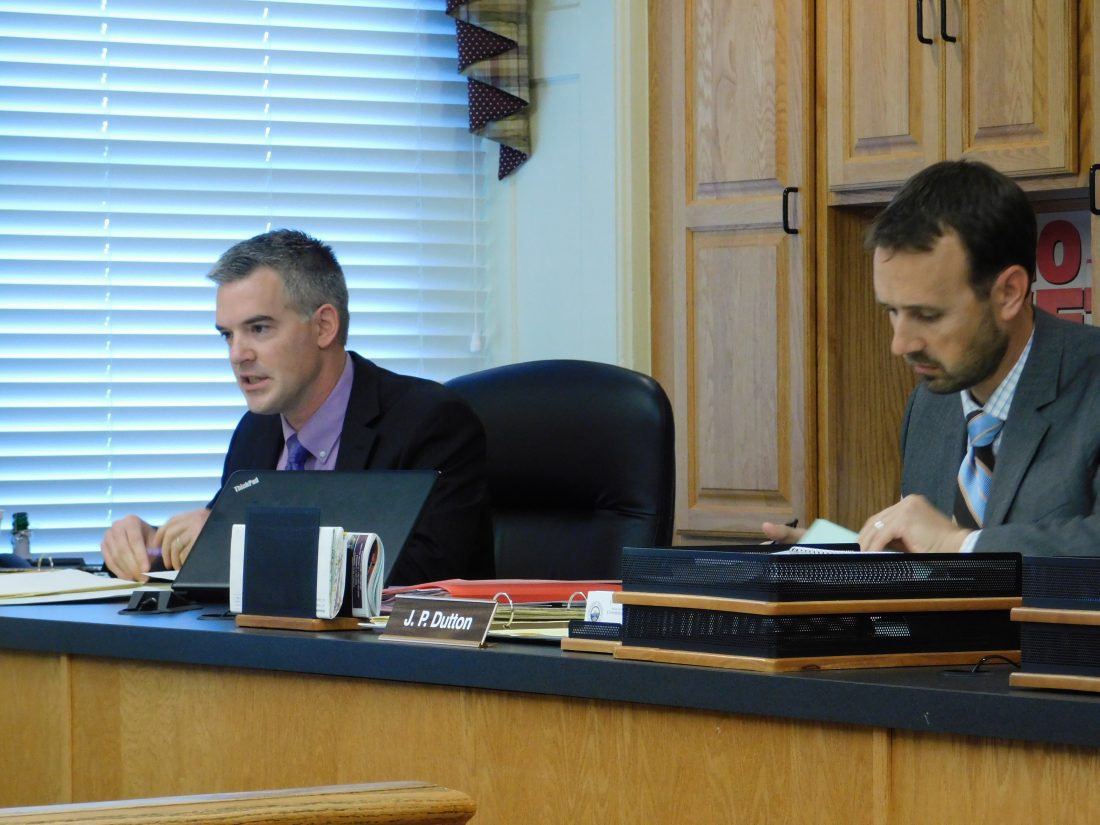 ST. CLAIRSVILLE — Belmont County Commissioners responded to public inquiries Wednesday about the possibility of an injection well at the intersection of U.S. 40 and Ohio 331.

Omni Energy Group LLC out of New Jersey is seeking a permit through the Ohio Department of Natural Resources. Commissioners Josh Meyer, J.P. Dutton and Jerry Echemann addressed concerns from the public at their Wednesday meeting.

“People are wondering if there are going to be hearings or not,” Meyer said.

He said the board has sent a letter to ODNR voicing opposition to the placement of a such a well at that site, and has recently received a reply.

Meyer said the board hopes to receive further information soon.

Several other communities including the City of St. Clairsville have joined in sending letters of opposition of the well to ODNR. Richland Township’s Trustees have also taken action to block the project by indefinitely tabling a permit and road use maintenance agreement. They, and numerous residents, object to the site’s proximity to residences — particularly on the adjacent Pickering Road — businesses, county government buildings, a college and nearby heavy traffic.

Richland Township Trustee Kathy Kaluger said she expects ODNR representatives will come to Belmont County for the hearing. She and Township Trustee Greg Reline said they believe this is a promising development for the effort to prevent an injection well’s placement.

The Belmont County Engineer’s Office confirmed that Gerard Russomagno, CEO of Omni Energy, had on Oct. 1 purchased two parcels of land in the field where the well is proposed, 1.4 acres and 0.84 acres.

Meyer said he does not believe this indicates imminent well activity.

“It’s just that the property is now transferred to him and he owns the property,” he said. “That doesn’t mean ODNR has approved anything. That process is still taking place. There’ll be a public hearing from ODNR here very soon.”

“Two years ago it was done when they invited just individual states. This year, they invited regional areas,” Meyer said.

Officials from Kentucky, Michigan and Ohio were present.

“It was a great opportunity to interact with several departments within the federal government. … (There were) a lot of good questions, a lot of good answers. I think the goal is to break down a lot of the barriers.”

He said one goal was to better convey local issues to federal officials. They spoke to representatives from numerous federal entities, including the Department of Transportation, the Office of Inter-Governmental Affairs and others. Topics included national drug control policies, education, energy and the environment. The commissioners were also able to interact and share information with other local leaders about the issues they face.

“For example the opiod crisis is a big deal in this area and hit us pretty hard. It’s also hit other areas as well,” Meyer said. “It was just good to have some of that interaction.”

“It was very beneficial,” Echemann said. “You meet a lot of commissioners from other parts of Ohio. … It was a lot of stuff that pertained to our area.”

Dutton said the prior conference in 2016 created connections that may have helped Belmont County in receiving funding for the upgrade of its water and wastewater system. He said last week’s conference was likewise informative.

Guests included Leatra Harper, managing director for the FreshWater Accountability Project, an organization opposed to a potential ethane cracker plant in the Shadyside area, who said they would hold a presentation on the health and environmental impact of a plant at 6 p.m. to 8 p.m. Oct. 29 at the St. Clairsville recreation center.