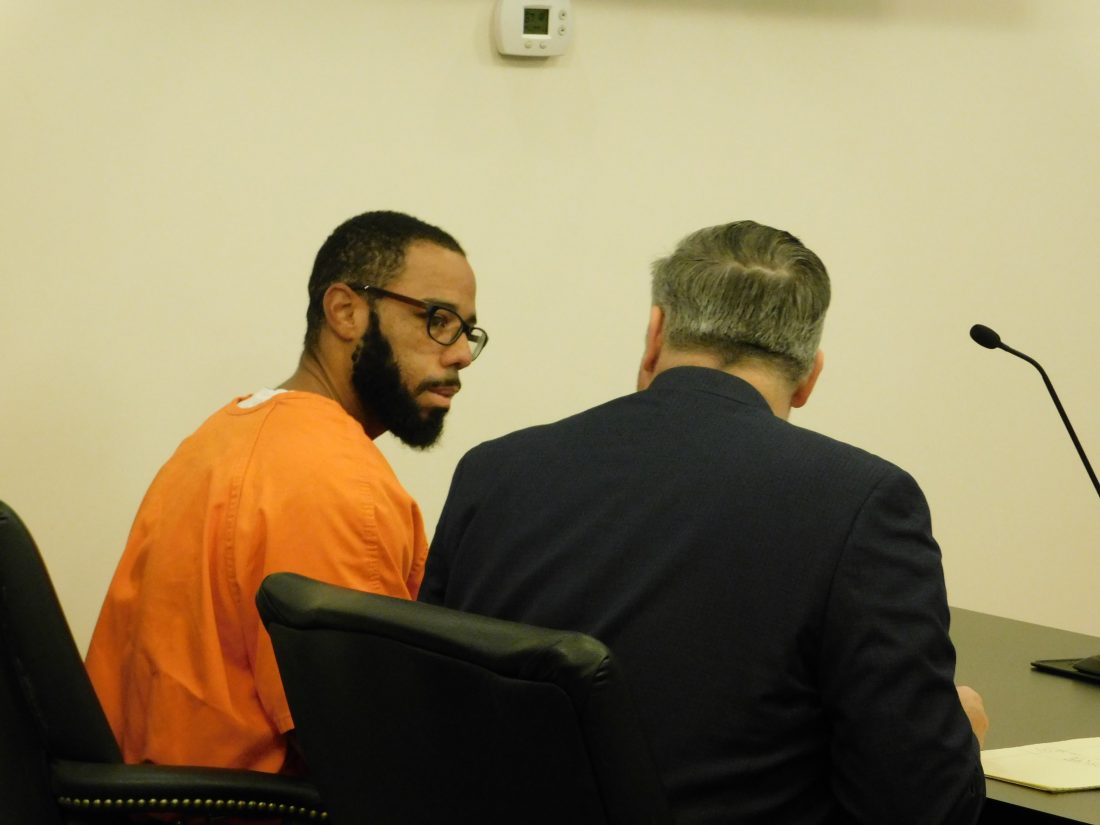 Christianson Sean Hill speaks with defense attorney Brent Clyburn on Friday prior to hearing his sentence of life in prison. A jury found him guilty of rape of a child younger than 13.

ST. CLAIRSVILLE — Christianson Sean Hill will continue to serve a life sentence for raping a girl younger than 13 and will not be eligible for parole for 25 years.

Hill, 32, of Wheeling was convicted Monday after a five-day trial in which both the victim and Hill took the stand to testify. The girl was 12 years old when she disclosed in April 2017 that she was being abused by Hill. She testified that the sexual abuse had continued for two years and included threats by Hill against her and her family members in an attempt to secure her silence.

Hill testified that he was innocent and said the presence of DNA evidence on the victim’s clothes was a result of him not washing his hands. A rape kit performed on the child also tested positive for Hill’s DNA.

Hill had been sentenced to life in prison for the same crime in March 2018, but the Seventh District Court of Appeals overturned his guilty plea. According to a Sept. 20 news release from the appeals court, Hill’s guilty plea was overturned because the court found Hill was not fully informed that he would be waiving his constitutional right to a jury trial by making the plea. According to the Belmont County Clerk of Courts Office, Hill had entered an Alford plea, which denies guilt but recognizes there is sufficient evidence for a conviction.

With the most recent verdict, Hill also was designated as a Tier 3 sex offender. That means that if he is granted parole, he will be required to register with the sheriff’s department of the county where he resides every 90 days for the rest of his life.

“Mr. Hill recognizes the nature of the charge. The jury, having rendered a verdict in this matter … He understands that with that, a substantial sentence could be handed down today,” Clyburn said.

Fregiato reviewed the facts of the case and several passages from a letter written by the defendant.

“I was 10 years old when I stopped being a regular kid,” she wrote. “I lost two years of my childhood. … He threatened to hurt people.”

The letter went on to detail the threats Hill made and the lasting emotional harm to the victim. Fregiato also referred to Hill’s prior criminal record.

“We have an individual who not only was convicted of rape of the first degree, we have an individual who has a violent past, and that is confirmed by the pre-sentence investigation,” Fregiato said. “This court sentences the defendant to a lifetime in prison. This court determines that the defendant will not be eligible for parole for 25 years. A quarter of a century. That’s the maximum allowed by law.

“Quite frankly, after listening to the testimony of this case … if I could sentence the defendant to a lifetime without the possibility of parole, I honestly would do so. … The facts in this case are absolutely sickening. Sickening,” the judge continued. “There’s no other way to describe them. Let it be known that the children of Belmont County, Ohio, will be protected.”

Belmont County sheriff’s Deputy Michael Kovalyk, who had served as chief of police in Bellaire during the initial disclosure and investigation, commended the cooperation of law enforcement agencies in the case.

“Unfortunately the victim had to re-live this horrendous crime,” he said. “Due to the severity of the crime, we thought we needed to pull all resources together that we could. … A lot of credit goes to Detective Sgt. Doug Cruse of the sheriff’s office. … We’re glad this case has come to an end, and the sentence was given was one that was deserving.”

Kovalyk also thanked Harmony House, UPMC Children’s Hospital, and the Ohio Bureau of Criminal Investigation for their help in the case.