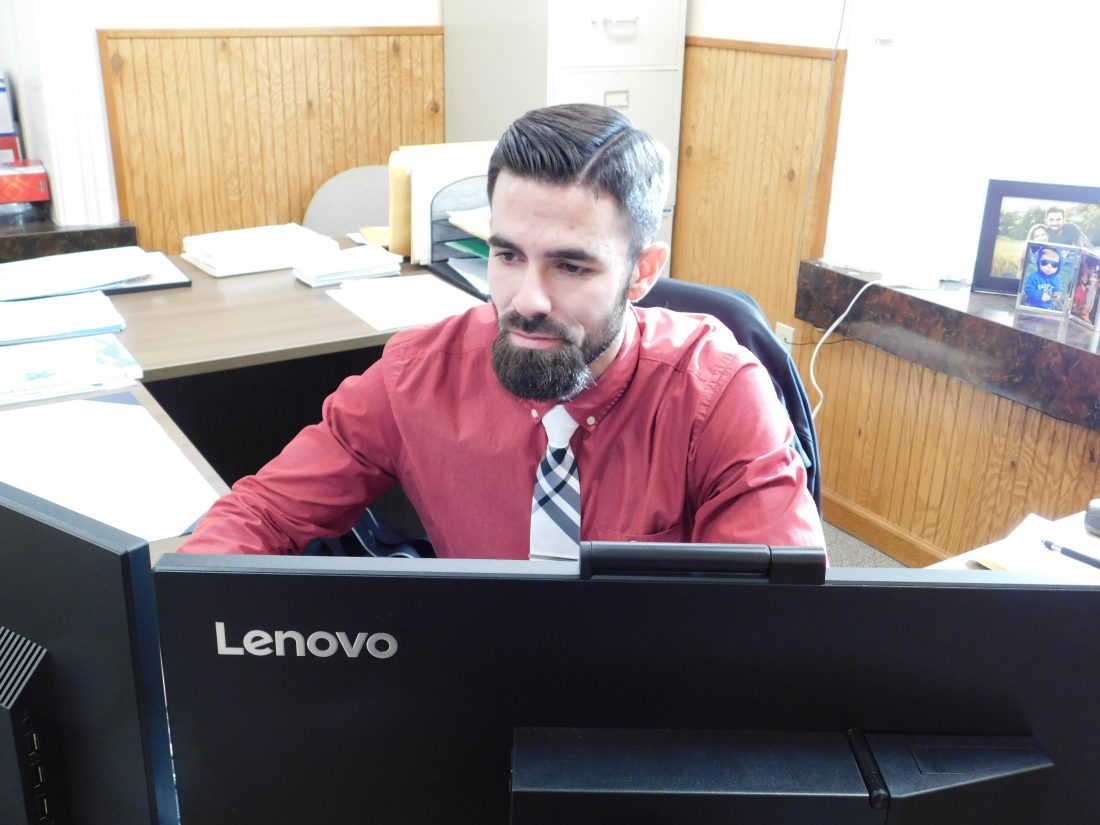 Belmont County Auditor Anthony Rocchio reports a dip in sales tax revenues, but the Belmont County commissioners said they are confident that future oil and gas investments in the area will continue to promote prosperity. T-L Photo/ROBERT A. DEFRANK

“I’m curious about the financial impact of the oil and gas industry on Belmont County for 2019. Is it similar to how it has been in the past? Is it less? Is it more? How are things coming along?” Hord inquired.

“I think things are coming along fairly well. I think the impact has been positive,” Meyer said. “Sales tax has been pretty steady over the last few years, but it’s increased from what it was prior to all that taking place. Lodging tax has been pretty steady this year as well. It’s been a good thing for tourism in Belmont County. … We anticipate more growth here in the future, depending on how things progress.”

Many are also awaiting official word that an ethane cracker plant will be built in the Dilles Bottom area. They expect that development to lead to more economic prosperity.

“I know that’s on everyone’s mind, and we’re waiting patiently as well,” Meyer said. “When and if that takes place, I think we’ll continue to grow.”

According to the Belmont County Tourism Council, lodging taxes collected this year so far come to $480,686, while last year at this time the amount was $511,665 with a total of $658,642 for the year. When tourism Director Barb Ballint gave the quarterly report to the commissioners, she said she expected that revenue to increase with more gas and oil activity.

In terms of sales tax, Belmont County Auditor Anthony Rocchio said he did not have the current sales tax numbers at hand, and the December shopping season was still upcoming, but the hiatus of Jamboree In The Hills country music festival has been a blow to sales tax receipts. He added that this was cushioned, however, by the new locally originated Blame My Roots festival.

“It’s down this year,” Rocchio said. “We’ll see a decrease in our sales tax this year overall. The oil and gas is a little more complicated. … Christmas is coming up, you want to see what that brings.”

Oil and gas operations also provide for road paving through road use maintenance agreements, or RUMAs.

“There’s been some work in the county. I would characterize this as being a typical year,” Belmont County Engineer Terry Lively said. He did not have an estimate of the total amount of RUMA paving in 2019.

“I haven’t added it up, but there has been steady activity throughout 2019 as far as oil and gas and RUMAs. We’ve seen some improvements made on some of our roads. I would say it’s been a typical year from that standpoint,” he added.

He said Sharon Road off of U.S. 250 in the Colerain area was updated earlier this year, with improvements made to Country Club Road ongoing.

Lively also said Equitrans Midstream has contributed $100,000 toward the replacement of a retaining wall on Colerain Pike.

“We plan on doing that work next year as part of an (Ohio Public Works Commission) project,” he said. “Pugh Ridge was recently repaved by Gulfport in anticipation of some work they’re going to be doing out there, this summer of next year.”