LINDA HARRIS For the Times Leader 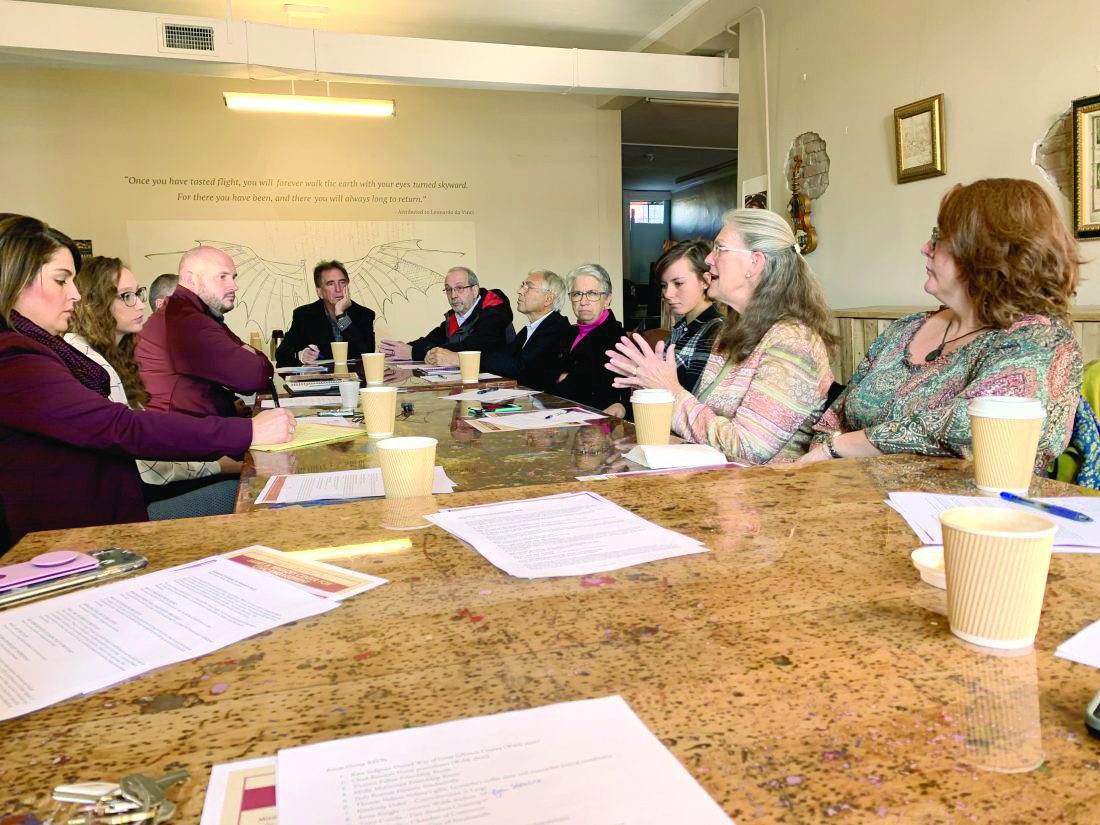 Photo by Linda Harris Community leaders discuss the advantages and disadvantages of life in a small town Friday at Leonardo’s.

“Ohio does have some challenges,” former U.S. Rep. Jim Renacci, the moderator, said at the outset of Friday’s focus group at Leonardo’s. “If a state has challenges, its communities are going to have challenges as well.”

New York Times journalist Eduardo Porter wrote in an October 2018 article, “Why Big Cities Thrive, and Smaller Ones Are Being Left Behind” that Steubenville and Weirton “were ill suited to survive the transformations brought about by globalization and the information economy. They have been losing population since the 1980s.”

“But what made them such bad places to ride out a recession was not just their industrial mix. With only about 120,000 people, they were just too small to adapt to the shock. And they may be too small to survive.

“…Whether they rely on steel mills or coal mines, or a hospital or a manufacturing plant, small metropolitan areas are having a hard time adapting to economic transitions,” Porter wrote.

“This inability has not only slowed their recovery. As technology continues to make inroads into the economy — transforming industries from energy and retail to health care and transportation — it bodes ill for the future of such areas.”

He pointed out a study released by a trade group in January ranked Ohio as the sixth most moved-from state in the U.S.

“People are leaving,” Renacci said. “That makes for challenges. Without people, without businesses” it’s harder to survive.

As a small business owner in a small town, “It’s hard to generate enough sales to overcome the expense of running a business,” he said. “There’s no volume there to offset costs that occur.”

“We are a very close-knit community, a faith-based community” he said. “…There are 39 churches in town … faith plays a major role in Steubenville. That, to me, is our largest advantage, the people who live here.”

At the same time, he said, “we have nothing to draw them back.”

“They key thing is for people to have a job,” he said.

“We want the people who live here to feel like it’s a family-friendly, safe place to be,” Barilla said. “We need a way to attract small retail business, but also companies that employ 20 or 30 people and pay a decent wage. That should be a goal for us.”

“We need to try and present (the community) as a good bunch of people trying hard to make life better for ourselves and our children,” Bratten said.

Therese Nelson, creative force behind Steubenville’s Nutcracker Village and architect of First Fridays on Fourth, said when they graduate, “Everybody just leaves, sometimes they never want to come back.”

Steubenville doesn’t “have the economic opportunities they’re looking for.”

“(Some) people think, ‘There’s nothing here for me, I have to go somewhere else to find opportunity,” Nelson said.

“The upside is people from Steubenville are bringing their families back and want to stay here. So there’s more hope here than in other cities.”

Councilwoman at large Kimberly Hahn said the young people who now call Steubenville home “are getting increasingly engaged in revitalization. It’s not just old people saying ‘let’s get back to what we used to be.'”

“I think people are beginning to hope again,” she said.

At the same time, Hahn said the transformation won’t be complete until the downtown is buzzing with activity.

Hahn also said the city needs to do more to market itself, pointing out, “People long for a sense of community, they’re searching for that. We have a tremendous community here, people are generous.”

“Buildings have been allowed to sit and rot for 30 years,” shopowner Mary Ann Freeze, a Steubenville native who lived elsewhere for 28 years, chimed in. “And we need to figure out a way to get people to look here first when they’re going shopping or looking for dinner (out).”

First National Bank’s Melanie D. Wilharm said she “sees something happening here, you can see development and growth. There’s tons of opportunity for young professionals because the baby boomer population wants to sell.”

But on the flip side, First National’s Joan Baird said it seems like “the city throws up roadblocks” to people trying to start businesses.

Chamber of Commerce President Tricia Maple said “jobs are the answer to everything.”

“Everything flows down from jobs,” she said. “We can be as business-friendly as you can be, but unless workers show up for work” and can pass drug tests “it’s not going to improve.”

Nurse practitioner Chad Bauman, a Walsh alumni, said Steubenville “doesn’t need to be a Pittsburgh, we don’t need to be Columbus.”

“We just need to be open-minded, I think that’s our biggest hurdle,” Bauman said.

Steubenville Urban Projects Director Chris Petrossi said there are people who want to see the city return to past glories.

“That’s never going to happen,” he said. “We need to build a new Steubenville — we need to be mindful of the past (but let it go).”

“I’ve learned that Steubenville faces some of the same issues other small towns in our state face,” Renacci said. “It’s jobs, it’s populace. But not as much.

“It comes back to leadership,” he said. “(Leaders) have to have vision — too often political leadership looks to the next election, not the next generation.”