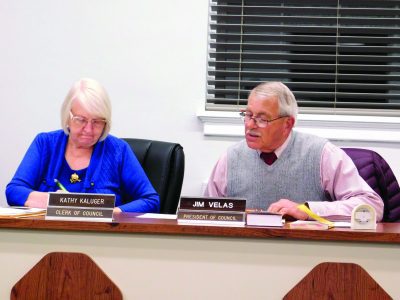 T-L Photos/ROBERT A. DEFRANK St. Clairsville City Clerk Kathy Kaluger and Council President Jim Velas review the votes for water privatization Monday. Council took a vote resulting in three-to-two in favor of selling the water and wastewater system, but because of a lack of council members, the decision could not be passed and a new vote will occur after today’s election. 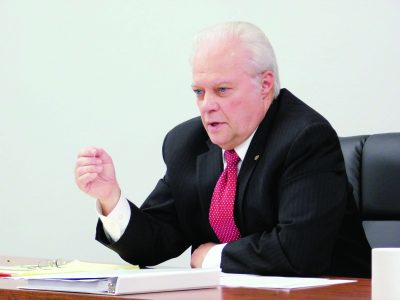 St. Clairsville Law Director Richard Myser informs council Monday they could not pass a vote on water privatization due to a lack of council members. A new vote will occur after today’s election. 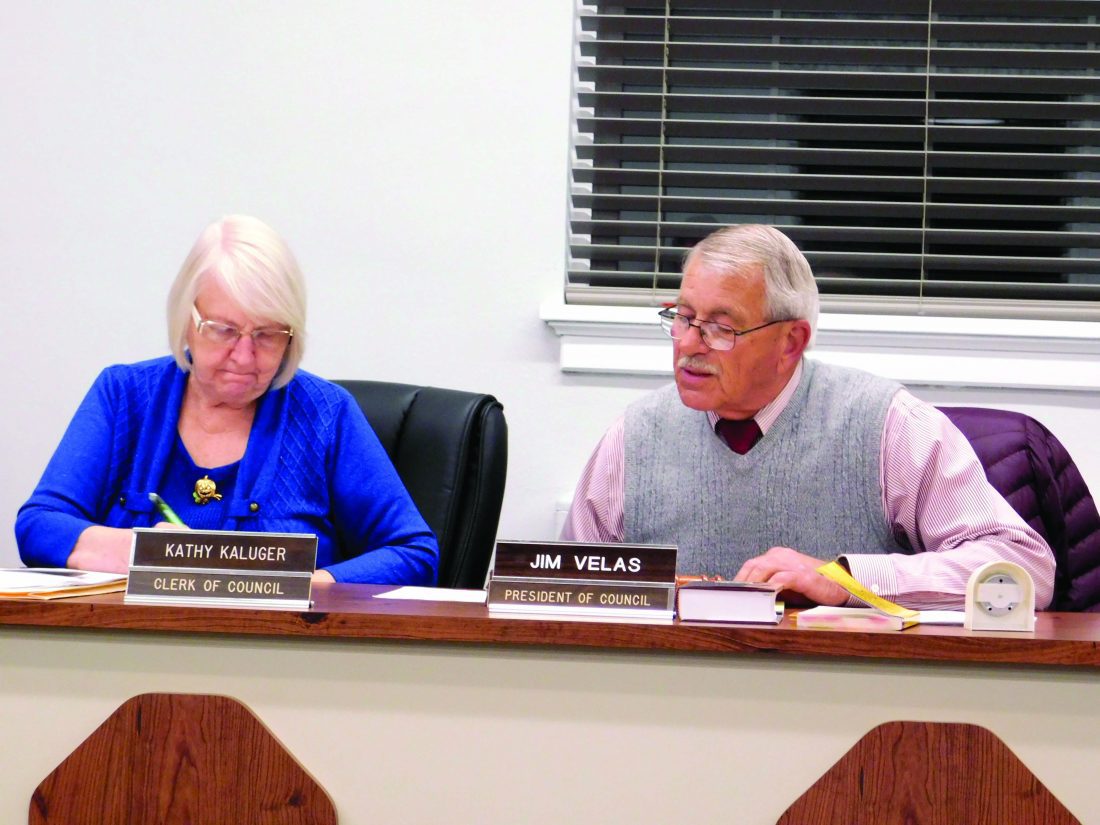 T-L Photos/ROBERT A. DEFRANK St. Clairsville City Clerk Kathy Kaluger and Council President Jim Velas review the votes for water privatization Monday. Council took a vote resulting in three-to-two in favor of selling the water and wastewater system, but because of a lack of council members, the decision could not be passed and a new vote will occur after today’s election.

ST. CLAIRSVILLE — The decision to privatize water and wastewater service was delayed Monday night by an absent council member.

Council held the third reading of the water and wastewater contract with Aqua Ohio, a private state-regulated entity, but was unable to pass a vote. Council Members Frank Sabatino, Mike Smith, Mark Bukmir, Beth Oprisch, and Linda Jordan were present, but Councilman Perry Basile was unable to attend, having informed council he was called away on a family medical emergency.

Jim Velas also vacated his seat and took on the role president of council, having been appointed to that role in October. The last president, Tim Porter, had stepped down last month citing health reasons. Porter’s move came after an audio recording of him was using profanity and a racial slur was released.

Sabatino, Jordan and Bukmir voted in favor of privatization and Oprisch and Smith against. Velas, as president, could only cast a vote in the event of a tie. Council is still in the process of filling Velas’ vacant seat on the 4th Ward.

Law Director Richard Myser said council could not proceed with a ratio of three to two votes. 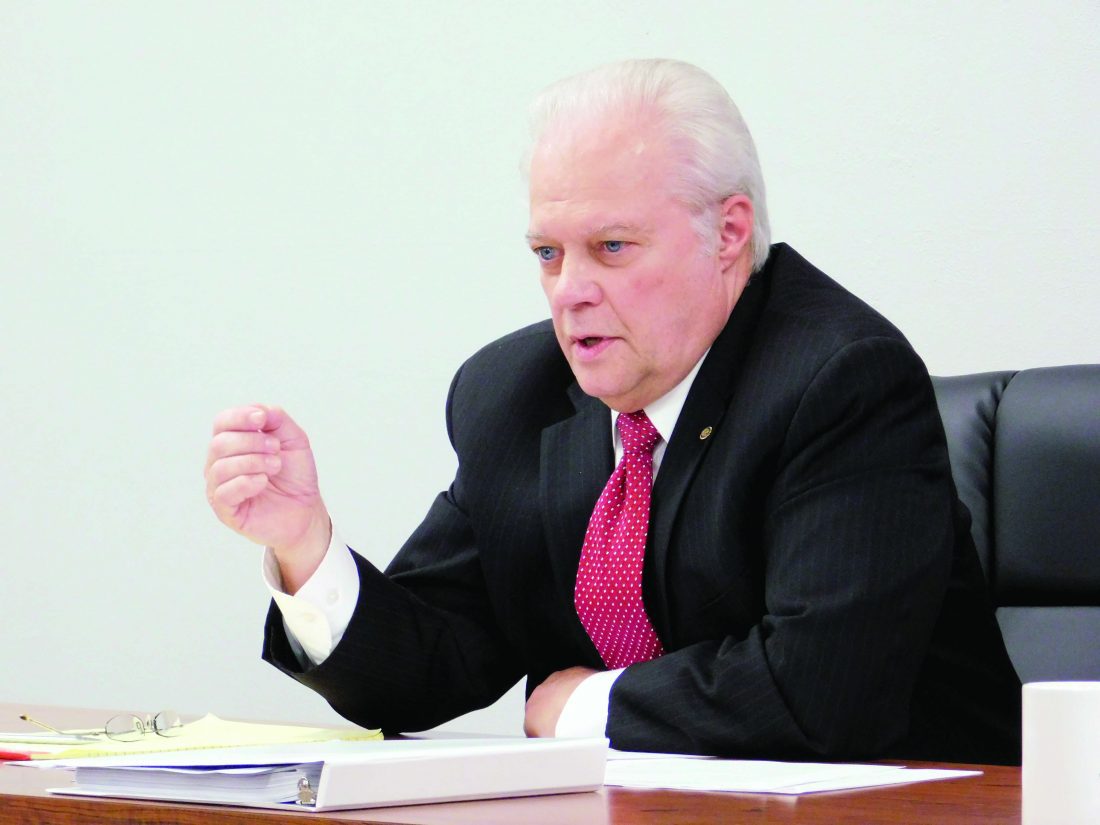 St. Clairsville Law Director Richard Myser informs council Monday they could not pass a vote on water privatization due to a lack of council members. A new vote will occur after today’s election.

“We don’t have four votes either way,” Myser said.

“The only thing we’re going to be able to do is table this matter until the next council.”

The crowd in council chambers cheered.

“It obviously will be after the election, and hopefully it will be after we’ve had an opportunity to fill the vacant position that we have,” he said.

Elections will be held tonight, with Osprich, Jordan and Smith’s at-large council seats to be contested.

Council has until Nov. 18 to appoint a new member to Velas’ seat or the mayor will appoint someone. There have been four letters of interest. Velas said a special meeting of the full council will be called to interview candidates in executive session at a later date, which will be announced.

“I think we’re kicking the can down the road more and more,” Mayor Terry Pugh, a proponent of privatization, said afterward.

“I think the games are being played,” Safety and Service Director Jim Zucal, another proponent of the contract, said afterward. “It’s not in the best interest of the city.”

The Ohio Environmental Protection Agency has put the city on notice months ago and has given several costly mandates for the city to repair and upgrade the water plant and distribution system. Earlier in the meeting, Pugh said the EPA is expecting to be notified of council’s decision so the responsible entities may make a plan.

He said the EPA has recently informed St. Clairsville that failure to meet its water requirements and bring the system to compliance could result in administrative or civil penalties of $25,000 per day for each violation.

“This is how serious the EPA is taking this matter,” Pugh said. He said

In answer to a question from Oprisch, Pugh said recent rains of two to three inches once more resulted in flooded basements at Bellview Street residences, including flooding of sewage. According to the contract, $500,000 would be devoted to helping fund a project to alleviate these problems.

Myser also announced Kimberly Bojko, the attorney who negotiated the contract with Aqua Ohio on behalf of the city, had spoken with Aqua Ohio after the Oct. 21 meeting where council members questioned her about the contract. One issue brought up was who would be responsible for any emergency expenses that might occur should St. Clairsville agree to the contract, but before it was fully closed. Myser said Aqua Ohio has agreed to an amendment where the company would negotiate the sharing of emergency expenses of $250,000 or more during the time before the contract goes into effect.

Oprisch had proposed a resolution to delay the contract so that an independent study could be made to determine costs and options, including what it would take to maintain local control. This was voted down in a prior meeting, with her, Basile and Smith opposed by Jordan, Bukmir, Velas and Sabatino. Before the vote Monday she read a statement expounding on her opposition, saying the city leaders have not sought any other answer beyond privatization.

“We did not seriously look at other loans, we did not make necessary improvements to the system, we did not conduct a cost analysis of the improvements that needed to be made or allow for a financial feasibility study for the amount of monies that we need to borrow,” she said.

She added that there would have been ample time to take such actions during the bidding process.

Osprich also said the process of reading the contract ordinance was rushed and began prior to the question-and-answer session with Bojko.

“I’m concerned that we are asked to vote on this ordinance the day before an election,” she said, noting the mayoral race would also be decided Tuesday evening.

She also opposed voting without a full council. She said council members who have voiced concerns have been the subject of personal attacks and smears. She also said council and citizens have been receiving contradictory information concerning the degree rates would increase should council reject privatization.