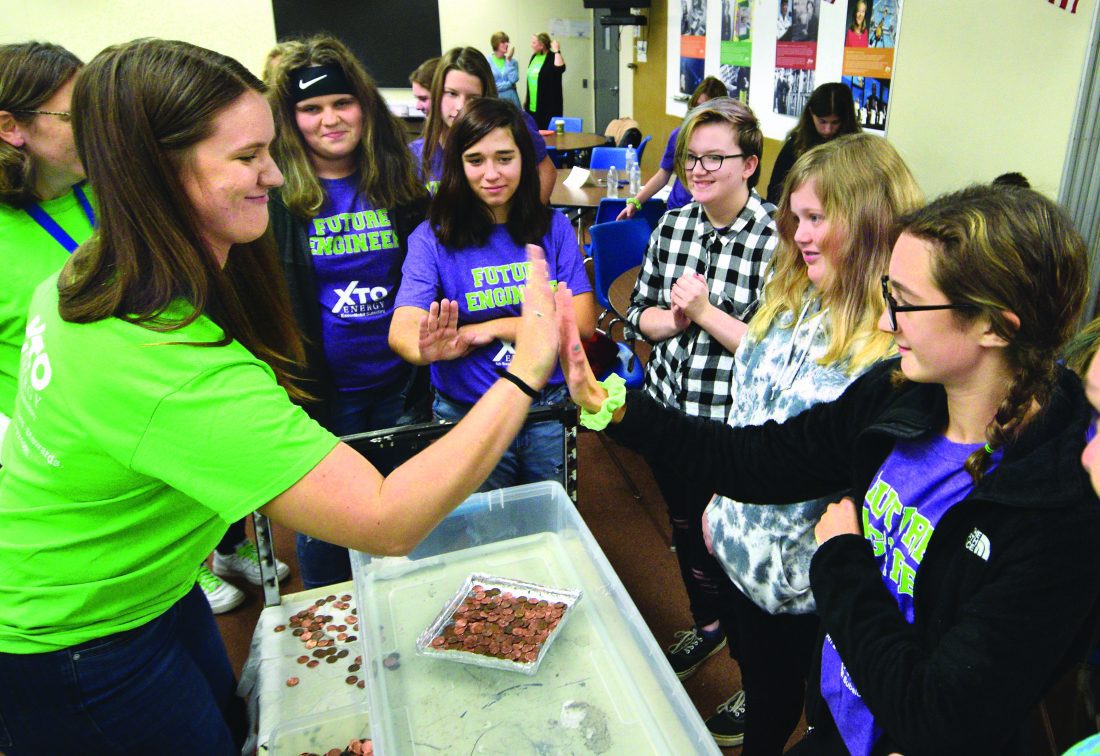 ST. CLAIRSVILLE — One by one, small groups of middle school girls from Shadyside, Bellaire and Powhatan point anxiously awaited the outcome as they worked to see how many pennies they could float on a miniature “raft,” each created from only two sheets of aluminum foil and four straws.

The winning group walked away after floating 462 pennies in a small tub.

The classroom experiment was all part of an effort to encourage dozens of middle school girls to consider careers in the STEM fields — science, technology, engineering and math. XTO Energy, an ExxonMobil subsidiary, hosted ‘Introduce a Girl to Engineering Day’ at Belmont-Harrison Joint Vocational School in St. Clairsville on Tuesday. As part of the event, students heard from several of XTO Energy’s female engineers about their careers and experiences, and they also had the opportunity to get hands-on experience with fun and educational classroom experiments.

Holly Hannold, public and government affairs manager for XTO, said the engineering day event is a great opportunity for the company to help spark an interest in the STEM fields with girls at an “impressionable” age and explain to them there are plenty of careers available in the natural gas and oil industry throughout the region with companies like XTO. About 50 students were selected by their school districts to take part in the day-long educational program. A second experiment included constructing a miniature “catapult” to see how far they could launch a marshmallow.

“They tend to be sponges and kind of soak up all of that information. They all have a different way of putting together these projects,” Hannold said. “I’m seeing a lot of excitement around just what a career in engineering could bring to them, and I hope it really sparks kind of an interest in science and math and being able to really apply themselves to their school work and to courses that hopefully get them into engineering later in life.”

Hannold said there is an increasing demand for a skilled workforce in the region in the gas and oil industry, and organizers hope to convey the need for fueling the “pipeline of workers” coming to this area.

“We want them to see how exciting it can be to pursue a career in engineering or the science and math fields … and to see that engineering kind of puts together all of the exciting elements of being creative and tinkering and building and constructing projects and solving really complex problems,” she added.

Bellaire Middle School students Chelsey Lednik and Rylie Porter said they believe it was the folded edges they incorporated into the design of their miniature raft that helped their team win the competition by floating 462 pennies. Both Lednik and Porter said they were not only excited about participating in the day’s activities but also about the thought of maybe one day becoming an engineer or working in the STEM fields. All participating students where provided with a free T-shirt, XTO helmet and gift bag with school supplies.