A legacy of literacy 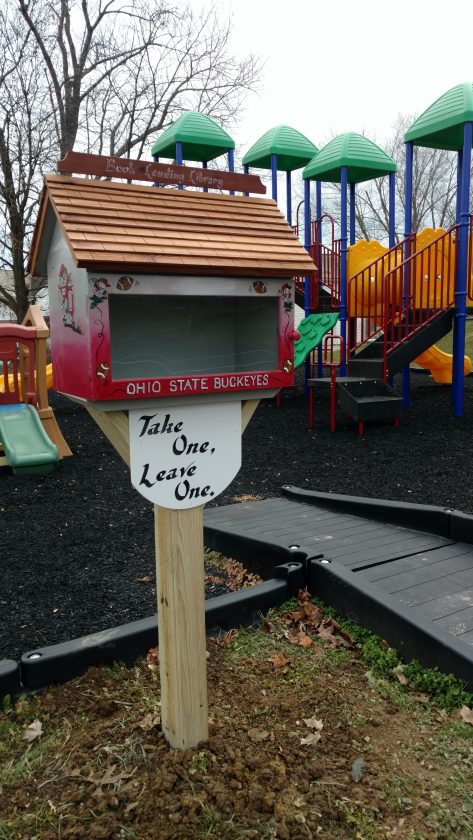 T-L Photo/LENNY WITTENBROOK A new miniature lending library stands at the playground in Belmont. It is one of three new units dedicated in memory of late resident and former teacher Bernice Bartels.

BELMONT — A community that had no library at all now has three small book-lending sites, thanks to one family’s decision to honor their late matriarch and her love of reading.

Bernice Bartels had a lifelong passion for books and reading. Now she is being memorialized by her family with the installation of three “lending library” boxes in the village of Belmont, which she called home for several years. Bernice spent her life promoting children’s literacy, working as a kindergarten and Title I reading teacher in the Union Local School District before retiring in 1996. Bernice was a member of Belmont United Methodist Church for more than 50 years and in her retirement, she enjoyed traveling, doing genealogical research and spending time with her family. She died in 2018.

According to her daughters, Martha Scott and Mary Kemp, and granddaughter, Sarah Scott, Bernice had a large collection of books of her own. It was this collection and her love for education that inspired the family to honor her this way, according to Martha.

“She always said that education was a lifelong process,” Sarah said of her grandmother.

“I think as a whole, we really agree that reading is a fundamental part of learning,” Anne Bartels, Bernice’s daughter-in-law, added.

And she should know — she is one of the nine educators in the family.

Anne and her husband Mitch, Bernice’s eldest son, both taught in the Barnesville Exempted Village School District prior to their retirement. Martha and Mary both work in the Union Local School District, and their brother, Mike Bartels, is retired from teaching there. Mike’s wife, Janet, previously taught in the Bridgeport Exempted Village School District, and their daughter, Jacqueline Yahn, is an assistant professor of education at Ohio University Eastern. She is following in her grandfather’s footsteps; Bernice’s late husband, Bill, was the student teaching supervisor at OUE for many years. He and Bernice also spent many years as the caretakers of Ohio University’s Dysart Woods Land Laboratory.

Family members said Belmont Mayor Stan Sobel, who was a close friend and colleague of Bernice, was instrumental in the project. They said he handled all the dealings with the prison.

Sobel spoke about the new library units at a council meeting earlier this month.

“We hope that children will take a book home and have their parents read to them,” he said as he told council and residents to expect the units’ arrival. “One of the most important contributors to child literacy is being read to as an infant.”

At that same meeting, council passed a resolution dedicating the book-lending boxes.

“The Village of Belmont hereby dedicates the Learning Library Program for Children to village resident Bernice Bartels for her long term interest in child literacy,” the resolution states, in part.

The family members said they plan to swap the books out of the boxes periodically so that there will always be fresh options for those who use the libraries. Selections for both adults and children will be included in the books available at each location.